A violent, suspended police detective investigates a brutal murder, in which a manipulative and seductive woman could be involved. Vertigo, it ain't.


LATimes: Directed by Paul Verhoeven from a Joe Eszterhas script and starring Michael Douglas and Sharon Stone, "Basic Instinct" (citywide) has not exactly crept into town on little cat's feet. This story of a tough cop falling for a sultry murder suspect has been the center of an interminable string of controversies, ranging from the fury the project aroused among gay rights activists while it was being shot in San Francisco to the changes Verhoeven had to make in his cut to avoid the dread NC-17 and get a more inclusive R rating (for strong violence, sensuality, drug use and language).

But even though bisexual and lesbian characters do appear only in non-role-model roles, "Basic Instinct" feels more contemptuous of women in general than specifically anti-gay. And despite liberal amounts of both male and female nudity, the celebrated sex scenes have all the feeling and finesse of aggressive board checking in the Stanley Cup finals.

NYTimes: Whatever else Mr. Verhoeven winds up being assailed for, with a film that is as violent and misogynistic as it is sexually frank, he hasn't pulled his punches. That opening murder scene serves as warning that "Basic Instinct" is not bound by the usual rules of decorum, not even those rules that apply to homicidal psychopaths playing cat-and-mouse games with the San Francisco police.

Roger Ebert: As for the allegedly offensive homosexual characters: The movie's protesters might take note of the fact that this film's heterosexuals, starting with Douglas, are equally offensive. Still, there is a point to be made about Hollywood's unremitting insistence on typecasting homosexuals - particularly lesbians - as twisted and evil. That's especially true in the same season when “Fried Green Tomatoes,” a story about two women in love, is cravenly constructed to obscure the story's obvious lesbian elements. Hollywood is fearless in portraying lesbians as killer dykes, but gets cold feet with a story that might portray them (gasp!) as warm, good-natured and generous.

That's quite a statement considering how awful the movie was when it came out.

One thing I do remember about this movie was all this buzz that was surrounding it. I went to see it with my girlfriend and her two friends. Somehow we were able to see this even though we were sixteen. We ran into their English teacher on the way in. She had seen the earlier showing and we were going to see the later showing. It was among the most awkward movie viewing experiences of my life.

I have such a soft spot for Paul Verhoeven and one of the reasons is that even when he makes absolute garbage he's all in on it.
posted by MoonOrb at 8:17 PM on February 15, 2018 [5 favorites]

Joe Eszterhas and Paul Verhoeven did each other no favors by collaborating; Verhoeven by himself is known in America mostly for his near-future SF films, and Eszterhas for a couple of not-great but mostly-inoffensive hit movies (Flashdance and Jagged Edge). But both this and Showgirls seem to be lightly coated in mucus of uncertain provenance.
posted by Halloween Jack at 9:07 PM on February 15, 2018 [5 favorites]

Sharon Stone is an American treasure.

I didn't see this movie when it came out, but caught it a decade later and enjoyed it as Hitch-schlock. However, I was listening to a podcast earlier this evening that made a good point re: Sharon Stone and #MeToo: we are actually witnessing her violation here. (Stone has always maintained that she was misled about what was visible during the interrogation scene.) So I guess this is one that will no longer be a guilty pleasure for me.
posted by roger ackroyd at 9:27 PM on February 15, 2018

To me this is something like "a final chapter in Verhoeven's American Trash trilogy" (RoboCop and Total Recall), where he proved he could arrive relatively fresh on the scene and out-America any American director. The car chase in this movie was my benchmark for yonks.

One of those links called this genre of film the 'bonkbuster.' That's pretty funny. I really enjoyed this genre, and some of the trashiest films in it were the best. I think this one fails to be very sexy, as I find Douglas bland, and the board checking analogy above is correct. Yet it's a nice-looking film, atmospheric (LaTour!), and entertaining.

I had forgotten that this film had a sequel, which I watched, until one of those articles reminded me.
posted by heatvision at 5:06 AM on February 16, 2018

What a mess this movie is. It's difficult to be invested in a movie whose writer and director clearly have nothing but contempt for the entire cast of characters. Hell, it's pretty clear that Eszterhas and Verhoeven have nothing but contempt for their audience. The movie wants to be clever and sexy but can barely achieve confusing and trashy. It's problematic, I think, for a movie to set up a central question of, "is she or isn't she a killer" and then refuse to actually answer that question. It's especially problematic if the answer to the question doesn't even matter. If you go back and watch the movie with the idea that, "yes, she's a killer," it's still the same pile of bullshit as if she isn't. Nothing is changed.

Eszterhas has been well-established as a vile misogynist, who happened to make a lot of money because the industry is full of men who think just like him. I've never met anybody who was willing to defend him or his work. Verhoeven on the other hand, has staunch defenders, including himself. His defense is always that it's satire. "He knows it's crap. That's the point." What bullshit. He's just as vile and disgusting as Eszterhas, he just has the sense to come up with a plausible smokescreen of a defense. He's the guy that says horrible, offensive things and then when he gets called on it, acts all innocent, claiming, "it was just a joke." Whatever skills he may possess as a visual stylist are employed at the expense of a complete lack of a moral center.
posted by wabbittwax at 5:50 AM on February 16, 2018 [7 favorites]

MoonOrb: It was among the most awkward movie viewing experiences of my life.

Mine was Prospero's Books, where, on the way in, my friend and I ran into our English teacher who encouraged the whole class to go see it since we were studying The Tempest at the time. The teacher hightailed it out of the theater afterward and that was an awkward Monday morning class.
posted by emelenjr at 11:01 AM on February 16, 2018 [1 favorite]

Awkward movie viewing experiences? Coming Home, and one scene in particular, with an aunt and uncle when I was fourteen.
posted by Halloween Jack at 11:13 AM on February 16, 2018

Funny, I watched Prospero's Books in Grade 12 English AP class. I can't really remember much of it except a boy peeing while on a swing? Maybe it's a good thing I can't remember?

I watched Basic Instinct with my mom years after it came out - somehow I can only remember the ending, but barely. The hype was unforgettable, at least!
posted by Calzephyr at 5:51 PM on February 16, 2018

I saw this, aged 16, ON A DATE and it was nearly sold out so we wound up sitting IN THE FRONT ROW. That was certainly an experience.
posted by redfoxtail at 1:15 PM on February 18, 2018 [1 favorite]

Everything Wrong With Basic Instinct In 15 Minutes or Less
posted by kirkaracha at 10:40 PM on February 19, 2018 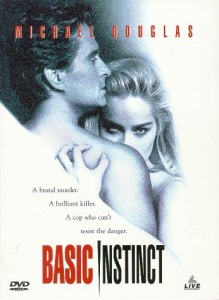