English gangster Albert Spica has taken over the high-class Le Hollandais Restaurant, run by French chef Richard Boarst. Spica makes nightly appearances at the restaurant with his retinue of thugs. His oafish behavior causes frequent confrontations with the staff and his own customers, whose patronage he loses, but whose money he seems not to miss. Forced to accompany Spica is his reluctant, well-bred wife, Georgina, who soon catches the eye of a quiet regular at the restaurant, bookshop owner Michael. Under her husband's nose, Georgina carries on an affair with Michael with the help of the restaurant staff. (from Wikipedia.)

If the most crass and sadistic people gained power, what would happen to the social order, to art and, above all, to love? This is the question Peter Greenaway explores in his elegant, stylized and brutal new film. "The Cook, the Thief, His Wife and Her Lover" may sound like another civilized marital minuet. But Mr. Greenaway turns this tale of a bullying criminal and his unfaithful wife into something profound and extremely rare: a work so intelligent and powerful that it evokes our best emotions and least civil impulses, so esthetically brilliant that it expands the boundaries of film itself.

The thief's thuggish personality stands astride the movie and browbeats the others into submission. He is a loud, large, reprehensible criminal, played by Michael Gambon as the kind of bully you can only look at in wonder, that God does not strike him dead. He presides every night over an obscene banquet in a London restaurant, where the other customers exhibit remarkable patience at his hog-like behavior. He surrounds himself with his cronies, hit-men and hangars-on, and with his long-suffering wife (Helen Mirren), for whom martyrdom has become a lifestyle. No behavior is too crude for the thief, who delights in making animal noises, who humiliates his underlings, who beats and degrades his wife, and whosetreatment of the chef in the opening scene may send some patrons racing for the exits before the real horror show has even begun.

"The Cook, the Thief, His Wife, and Her Lover" is not an easy film to sit through. It doesn't simply make a show of being uncompromising -- it is uncompromised in every single shot from beginning to end. Why is it so extreme? Because it is a film made in rage, and rage cannot be modulated. Those who think it is only about gluttony, lust, barbarism and bad table manners will have to think again. It is a film that uses the most basic strengths and weaknesses of the human body as a way of giving physical form to the corruption of the human soul.

Those who lived in England during the Thatcher years are better equipped than I to unpack the particulars of Greenaway’s allegory: Thatcher as “The Thief,” “The Cook” and his staff as the downtrodden commoner, “His Wife” as Mother England, and “Her Lover” as the feckless intellectual class. Really, the politics of Cook, Thief could probably be broadly applied to many tyrannical administrations, at least in those democracies that occasionally elect a power-hungry boor into high office.

posted by dnash (3 comments total) 4 users marked this as a favorite
Found myself watching this for the first time since 1989 the other day - it's available streaming on Filmstruck, or streaming rental on some other services. Back then a friend of mine caught the "Thatcher political allegory" angle, but I didn't know enough about the UK political scene to grasp that. I simply caught what we now might call the Toxic Masculinity angle.

This movie is about Donald Trump, basically, and it very much needs to be revived and seen more nowadays.
posted by dnash at 9:46 AM on March 14, 2018 [3 favorites]

My now-husband and I watched this on our second or third date (long ago enough that my roommate at the time had a laserdisc player, and this was one of the half-dozen or so discs in the collection).

I think I need to see this again. I saw when I was in high school, and I was ill-equipped to deal with it. I do remember sets and costumes being memorable. But I don’t remember much more. Hadn’t thought about it in two decades. Thanks for the reminder.
posted by greermahoney at 9:55 PM on March 14, 2018 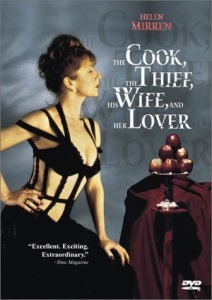