A Russian teenager living in London who dies during childbirth leaves clues to a midwife in her journal that could tie her child to a crime involving a violent Russian mob family.


WaPo: In a culture that increasingly defines its movies in ever-narrowing categories -- the torture flick, the geek comedy, the fantasy epic and on and on -- a film that moves to its own rhythms and rules is more than just refreshing. David Cronenberg, director of such memorable chillfests as "Scanners," "The Fly" and the 2005 masterpiece "A History of Violence," has created a movie that is contemporary storytelling at its finest.

The genre-busting in "Eastern Promises," which stars Viggo Mortensen and Naomi Watts, starts right in: A highly agitated young man enters a London barbershop and carves a horrifying gash into the throat of a Russian underworld figure. The assassin makes a mess of this and we almost feel the blade ourselves. Recoiling from the nauseating details, we're also confused: Are we watching the opening of a gangster flick or horror movie?

Roger Ebert: Cronenberg has said he's not interested in crime stories as themselves. "I was watching 'Miami Vice' the other night," he told Adam Nayman of Toronto's Eye Weekly, "and I realized I'm not interested in the mechanics of the mob, but criminality and people who live in a state of perpetual transgression -- that is interesting to me."

And to me as well. What the director and writer do here is not unfold a plot, but flay the skin from a hidden world. Their story puts their characters to a test: They can be true to their job descriptions within a hermetically sealed world where everyone shares the same values and expectations, and where outsiders are by definition the prey. But what happens when their cocoon is broached? Do they still possess fugitive feelings instilled by a long-forgotten babushka? And what if they do?

Entertainment Weekly: Eastern Promises unpeels like an onion of corruption, with double crosses and deceptions, and ordinary do-gooders (like Anna’s crusty old uncle) in way over their heads. Cronenberg’s craftsmanship is seductive, yet anyone waiting for a conventional resolution, or even a coherent one, will be soundly disappointed. The film’s key sequence is an amazingly vicious fight in which Nikolai, naked, fends off two dagger-wielding assassins in a steam bath, grabbing their weapons and plunging them again and again. And again. Cronenberg, riffing on the strategy of A History of Violence, wants us to gaze at Viggo Mortensen and see not just a man but a paradox, a walking deconstruction of humanity’s dual nature: good and bad, immersed in a violence so brutal it can only have come from evil, even if it’s being used for justice.

The Guardian: Eastern Promises is an exciting story about hypocrisy, decency and different kinds of honour, and about the dark underside of globalisation and multiculturalism. There are some flaws in the script (of a kind that can only be discussed between those who have seen the picture), but most of them are concealed, at least while we sit watching, by the excellence of the acting and Cronenberg's attention to detail. It's a chilling, discomfiting picture, and there's a particularly frightening moment when Mueller-Stahl, the brutal patriarch, leaves Anna with the baby in hospital, purring, silkily: 'So you know where I am, and I know where you are, Anna Ivanova.'

NYTimes: But even as the turns of its narrative and the contours of its characters are recognizable, very little about “Eastern Promises” feels predictable or secondhand. From his early days making low-budget horror movies in Canada to his current ascendancy as a favorite of the international critical cognoscenti, Mr. Cronenberg has always been a master of estrangement. He and his cinematographer, Peter Suschitzky, shoot the dark, rain-slicked London streets in tones that turn the city into a sinister, palpitating presence. Mr. Cronenberg’s deliberate, almost stately pacing — the way he lingers in scenes for an extra beat or two, as if studying the faces of his actors for clues — transforms what might have been a routine thriller into something genuinely troubling.

Slate: But even when people's bodies undergo terrible things in a Cronenberg film (the exploding heads in Scanners, the transformation into an insect in The Fly), there's a sense of respect for the body itself. Violence in Cronenberg is ineluctable, brutal, and repellent, but it matters. There's none of the blam-pow jokiness of the post-moral, video-game school of filmmaking. Rather, he's interested in the social uses of violence, whether as a tool of the powerful, a rite of initiation, or an erotic game. And even when—here as in A History of Violence—you're not quite sure what his meditations on the subject add up to, you leave his movies feeling unsettled in the best sense. Eastern Promises is only deceptively genre-bound; it's a conventional gangster film that morphs, Jeff Goldblum-style, into something far richer and stranger.

The Atlantic: I would describe Mortensen as a revelation in the role, had he not already demonstrated what he was capable of in his previous collaboration with Cronenberg, A History of Violence. As he did then, Mortensen shows himself more comfortable with darkness and ambivalence than he ever was with the gaudy heroism required of a king in Middle Earth. His Nikolai is an enigma, an evidently decent man surrounded by, and comfortable amidst, heinous evil, one whose motives, at least initially, are unclear. It does not hurt that, alone among the multinational leads, he manages a persuasive Russian accent--nor that, with his extraordinary looks (those cheekbones could have been cut by a jeweler) and athlete's physique, he all but demands the camera's attention.

Rolling Stone: In Eastern Promises, shot to envelop by the great Peter Suschitzky, Cronenberg brings us face to face with the horror of self. The film's bristling invention and biting with can't stave off the dread. Sure, it's hard to take. Consolation isn't Cronenberg's business. But art as a response to the terrors of modern life should be yours.

Viggo Mortensen: My painful decision to fight in the nude

A Conversation about "Eastern Promises"
posted by MoonOrb (9 comments total) 3 users marked this as a favorite
The steam fight bath is indeed impressive.
posted by Chrysostom at 9:36 PM on March 15, 2018 [2 favorites]

Excellent film, though I don't know if I can stomach a rewatch. It occupies a space in my head somewhere near Timothy Snyder's book Bloodlands; both opened my eyes to a dark, brutal side of history and human nature that I (almost) wish I could forget.

Aside from that, I did appreciate the depths the movie went into the culture of the underworld, especially the meaning of the various tattoos.
posted by sapere aude at 10:05 AM on March 16, 2018 [1 favorite]

Yes, the fight in the steam bath is brilliant.

I really like this movie, it's so not-Cronenberg in many ways. Mortensen being naked in the steam bath fight is probably the closest it gets to the usual body horror stuff.

I remember being totally surprised that this was a Cronenberg - it's missing the usual Cronenberg "weirdness", which in a way makes it all the more impressive, arguably his best work. Like sapere aude, I found it so intense that a rewatch hasn't happened yet, I'm (so far) never quite in the headspace to handle it.
posted by soundguy99 at 9:44 AM on March 17, 2018

I feel like this film is Cronenberg stripped to the bone, featuring a character who has reached deep within himself to permanently scarify his body and live an exiled life outside the safe society he once embraced and still yearns for. There is a straight line from Ballard’s heroes through Max Renn, Bill Lee, and James Ballard to Tom Stall and Nikolai.
posted by infinitewindow at 1:43 PM on March 17, 2018 [1 favorite]

I really liked this movie and have been thinking about rewatching it. I liked how immersive it is, bringing you into the film's world. I'll have to check if it is on any of the streaming services we get.
posted by Dip Flash at 9:37 AM on March 18, 2018

a really great movie but yeah it was pretty intense. I will rewatch it at some point when I can't remember much of it anymore.
posted by numaner at 3:57 PM on March 19, 2018

I feel like the spy/cop/mole angle might have been a little underserved, and I always get Tea Leoni and Naomi Watts mixed up.
posted by rhizome at 10:31 AM on March 25, 2018 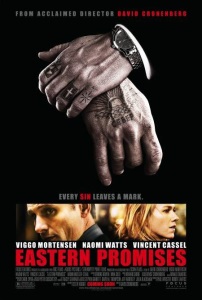