An illegal Nigerian immigrant discovers the unpalatable side of London life.


Slant: Arguably the worst film of Stephen Frears’s career, Dirty Pretty Things is a ludicrous, insecure psychological thriller that purports to give a human face to Britain’s invisible underclass.

WaPo: "Dirty Pretty Things," Stephen Frears's gripping, spirited movie, is neither horrorfest nor thriller, but both elements inform this immigrant's saga set in London. The movie is about the illegals, semi-legals and other hardscrabble foreigners forced to make a living in the shadows of the British capital. They are the busboys and taxi drivers, the porters, hookers and hospital orderlies who serve that storied city, no questions asked.

Commonweal: Acting in such a starkly defined moral scheme presents special challenges and temptations, and fans of Audrey Tautou’s dreamy performance in Amélie may find her work here overwrought-not only is this her first English-language film, but she has to paint a second foreign accent (Turkish) on top, and it’s a struggle she tries to win through a kind of bellicose virginal earnestness. Fortunately, Zlakto Buric brings comic relief, in the hulking form of a bawdy hotel doorman. And Chiwetel Ejiofor, a young actor of astonishing range (he recently played the role of the neurotic son in a London revival of Noel Coward’s Vortex), is sublime as the quietly despairing Okwe. Frears’s films, several of them done with excellent cinematographer Chris Menges, tend to be shot close. He’s terrific with faces, and Dirty Pretty Things catches Ejiofor’s character in closeups that reveal the agonized and bitter moment when dismay sinks into despair.

Roger Ebert: The heart of the movie, directed by Stephen Frears, is in the lives of these people. How they are always alert to make a little money on the side (as when Okwe and Ivan supply their own cash-only room service sandwiches after the hotel kitchen closes). How they live in constant fear of immigration officials, who want to deport them, even though a modern Western economy could not function without these shadow workers. How there is a network of contact and support in this hidden world, whose residents come from so many places and speak so many languages that they stop keeping score and simply accept each other as citizens of the land of exile.

We get to know these people and something of their lives, as Okwe stubbornly persists in trying to find out where that heart came from. He discovers that Sneaky is the key, and that the hotel is the center of a cruel enterprise which I will not reveal. The movie takes us into dark places in its closing scenes. But this is not a horror movie, not a shocker (although it is shocking). It is a story of desperation, of people who cannot live where they were born and cannot find a safe haven elsewhere.

This is familiar territory for Stephen Frears, an uncommonly intelligent director whose strength comes from his ability to empathize with his characters. They are not markers in a plot, but people he cares about.

AV Club: Working from a script by Steve Knight, Frears has directed a surprisingly sturdy hybrid of thriller and social melodrama, even if the thrills turn ludicrous and the social critique grows a little pat. Tautou doesn't make for the most convincing Turkish national, but she's balanced out by Ejiofor's assured lead and a strong supporting cast, particularly López, who chews scenery as a character who grows more villainous with each scene. He's the ugly face of an otherwise faceless system, and Frears goes to great lengths to map out how that system works. Eventually, the director becomes a little too insistent for the good of the film, but what's come before makes his urgency easy to understand.

Slate: Okwe is probably too much of a superhero to be true, and the movie has a touch of Paul Mazursky's sentimental Moscow on the Hudson (1984) in its depiction of immigrants from disparate cultures bonding to battle injustice. But if Dirty Pretty Things is more pretty than dirty, its prettiness is charged with guerrilla wit. Frears has a light touch here—as glancing yet precise as in the English TV dramas he made before My Beautiful Laundrette. The movies takes place in back corridors, garages, alleyways, and sub-subbasements, and Frears and his great cinematographer, Chris Menges, give the subterranean settings a macabre luster. When Okwe and his Chinese friend play chess in the morgue, they're surrounded by gurneys that are sometimes sterile and sometimes … not. The whole movie is like that: gleaming, but with a whiff of the charnel house. Dirty Pretty Things doesn't quite cut to the bone, but it gets as far as a couple of vital organs.

Empire: While it's essential to the plot that the characters inhabit a seedy London shadow-world of sleazy hotels and backstreet enterprises, this is by no means as bleak or depressing as one might think. It's beautifully filmed by the Oscar-winning Chris Menges, and there is considerable humour springing from the colourful but utterly believable array of outsiders, hustlers, creeps, dreamers and schemers. Our favourite is the dry Chinese hospital morgue attendant (Wong), who plays chess with Okwe, dispensing romance and survival tips, along with purloined medicines.

"Dirty Pretty Things" and the Dark Side of the American Dream
posted by MoonOrb (3 comments total)
So I love this director. Dirty Pretty Things is sort of skillfully dishonest? It's taut? It does more with the source material than it should be able to? And it's good? But there isn't actually that much there?
posted by zeek321 at 10:05 AM on March 24, 2018

I loved this film. I was working in an area where the thriller part was commonplace and so the twist didn't seem implausible at all because duh, I had met people who had survived and also did those things. London was dinky logistics. The film's dreamy sense of colour and physical mess was just so very gorgeous. Things of the body became beautiful in their displaced pain, everything gleaming and artificial and then a pattern of colour and shadows, and Okwe was riveting as he watched and tried, his face bruised with pain and tenderness. It's a fever dream of a film.
posted by dorothyisunderwood at 6:47 PM on March 24, 2018 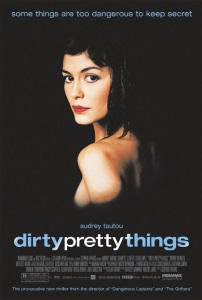