A family in Chicago inherits the yacht formerly owned by Clark Gable. They decide to sail it from the island of Ste. Pomme de Terre to Miami, and they sail with the assistance of Captain Ron and their lives will never be the same again.


Captain Ron is a 1992 American comedy film directed by Thom Eberhardt, produced by David Permut, and written by John Dwyer for Touchstone Pictures. It stars Kurt Russell as the title character, a sailor with a quirky personality and a checkered past, and Martin Short as an upper-middle class, suburban family man who hires him to sail a yacht through the Caribbean with him and his family aboard. Mary Kay Place, Meadow Sisto, and Benjamin Salisbury also star as his wife and children. (wiki)

Captain Ron is a movie about trapped suburbanites who break out into romantic seas, but it never really leaves suburbia... Like the Cap'n himself, this movie guzzles up its dreams and ignores the busted engine.
--LA Times

Captain Ron is a man with a past. He is a man who has lived. He is a man with character who benefits tremendously from the iconic baggage that Russell brings to the role. The eye-patch he sports is a throwback to Russell’s signature character Snake Plissken in Escape From New York; the shipbound setting recalls Overboard, another light comic favorite that would have been unbearably creepy with someone less effortlessly charming than Russell in the lead. Even the naughty-Disney vibe can be traced back to Russell’s early days as a teen actor in brightly colored live-action Disney movies overseen by dear old Uncle Walt.
--Nathan Rabin

“I know Capt. Ron. Capt. Ron is real, and the movie is true.” Yes, in its own goofy way, Captain Ron reflects cruising reality in a way that the seriously bogus film Lost with Robert Redford could never do.
--Peter Swanson, Sail Magazine

If anything's gonna happen, it's gonna happen out there.
posted by valkane (2 comments total)
The famous docking scene is pretty realistic, a boat making a sharp turn slows up and the large rudder on sailboats make for really precise maneuvers, in races they clear each other literally by inches. Not that I'm recommending the procedure, unless wind and current warranted the approach.
posted by sammyo at 6:49 AM on April 9, 2018

Yeah, so. I know Captain Ron... not the real one - but - someone that is the embodiment of Captain Ron. My dad's best friend's brother, Bob has these qualities:
#1. Expert Sailor
#2. Looks like Kurt Russel, scraggly beard, blond, disheveled hair, hawaiian shorts, and optional shirt (mostly hawaiian)
#3. heavy drinker / partier / always looking for the next bit of excitiement
#4. dove into Baltimore Harbor (for those of you who don't understand the ICK! factor on that in the 80s - just think Annapolis Bilge)
#5. Our engine died in a thunder and lighting storm in the middle of the chessapeake while we were racing to port
#6. 'Free Boat to use' in Ft. Lauderdale at his marina for a trip to the Bahamas required 2 days of maintenance to get the mast up and the boat seaworthy - not mentioned until that Captain Ron boat introduction - also a year before the movie was released... its like they pulled this scene right from him.
#7. I lived the 'If you want a beer, you go get yourself a beer' chess game with him in 1989. I was 13.
#8. When we did a different Carribean boat move, he wasn't joking about the pirates. And we had a semi-automatic assault rifle, and handguns for his brother and my dad in a gunsafe onboard to prove it.
#9. Above and beyond... his stories and the stories about him were generally - what could go wrong would go wrong, and yet somehow he would basically saunter through it completely unscathed and with a sunny attitude (generally while my Dad and his brother John would wind up in the Buttons end of the Buttons and Mindy relationship) 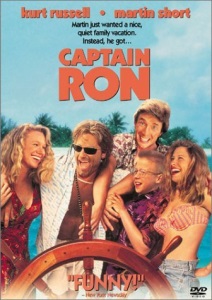