An unfaithful wife encounters the zombie of her dead lover; the demonic cenobites are pursuing him after he escaped their sadomasochistic underworld.


WaPo: "Hellraiser" is certainly a cut or two above the slasher films that seem to proliferate on Friday the 13ths and Halloweens. It's a decidedly adult picture, with some disquieting sexual tensions that simply wouldn't work with the usual teen crew. It's also a treatise on the thin line between pleasure and pain and how easily crossed it can be.

Empire: Indeed, the film's most pivotal image — and in many ways its most successful element — was the creation of a new screen monster. From Dracula to Frankenstein to the dead-eyed Michael Myers, the image of the horror movie has always been one that leant itself to icon-status, the Munch inspired Scream mask being the most recent example. Yet these key images are hard to find — witness the countless schlock-worthy entries in the horror movie cannon that inspire nothing more than casual interest. With the Cenobites — and Doug Bradley's Pinhead in particular — Barker created a unique horror movie presence.

Roger Ebert: Who goes to see movies like this? What do they get out of them? I like good horror movies because I enjoy being surprised (and sometimes even moved), but there are no surprises in "Hellraiser," only a dreary series of scenes that repeat each other. What fun is it watching the movie mark time until the characters discover the obvious? This is a movie without wit, style or reason, and the true horror is that actors were made to portray, and technicians to realize, its bankruptcy of imagination.

How we made Hellraiser

A VHS Copy Of Hellraiser Is Mysteriously Haunting A London Bus Stop
posted by MoonOrb (9 comments total) 6 users marked this as a favorite
This movie was like nothing else at the time, and it still kinda is. It’s more of a gory psychological thriller with supernatural psychological manipulators than a straight up horror film. It’s remarkably stylish for a low-budget 80s horror flick (that dolly tracking shot in the bar as stepmom stalks her next victim!). And for these types of films, making less sense and giving into a dream-like connection between events can often be a strength (cf Phantasm).

It’s an oddity: an arty horror film promoted as “the future of horror” that has few exploitation copycats but influenced many viewers who then went into the business. It’s like the Velvet Underground of art-horror.
posted by infinitewindow at 9:13 PM on April 13, 2018 [7 favorites]

I still get very tense about moving furniture every time I've had to move and always make sure to grasp bulky objects from the bottom.
posted by Hal Mumkin at 5:21 AM on April 14, 2018 [2 favorites]

I put it to you that the pinnacle of the entire Hellraiser franchise is this (from ca. Hellraiser 3). Content warning: you are about to watch Pinhead play poker with Lemmy.

So many surprising and fun familiar faces in this franchise. Garak from Star Trek: Deep Space Nine in this one, Lt. Gorman from Aliens in the second one, Jadzia Dax from DS9 in the third one, Ben Wyatt from Parks and Recreation in…one of those later, awful ones.
posted by CheesesOfBrazil at 7:40 AM on April 14, 2018 [4 favorites]

I enjoy a lot of the spinoffs from this one -- some of the more recent comics are interesting; Barker's novel, The Scarlet Gospels, is itself like the novelization of a comic book sequel by Jack Kirby, if you can imagine such a thing; and II is pretty good -- but I tend to think it all works better when it's mysterious and unfathomable, as it is here. Pinhead's backstory is interesting, but it's better to not know where he came from. There's an appeal to learning about the hierarchy of hell, but it's breathtaking to just be plunged into hell itself. The best horror films of recent years work the way this one does.
posted by kittens for breakfast at 3:50 PM on April 14, 2018 [1 favorite]

The scene where Kirsty is in the hospital room and she finally solves the puzzle, and the TV goes weird, and the Cenobites first appear -- that is the pinnacle of the movie for me. The rest of the film I can take or leave.
posted by wittgenstein at 5:25 PM on April 14, 2018 [2 favorites]

Also cortex and griphus did a podcast about it.

I watched the whole series off the back of that... the pretty good to ok immediate sequels, the not so good sequels, the 'lets pull this genetic horror script out of the development hell bin, have Pinhead come in at the end and call it a Hellraiser film' ones and the really really bad recent ones... oh the suffering.
posted by fearfulsymmetry at 1:55 AM on April 15, 2018

I just saw this movie for the very first time a week ago with no prior knowledge going in, AMA.

In retrospect, I think it was the right time of my life to watch it, because I'm actively trying to expand upon the horror movies I've seen; and although I've seen Pinhead (and have enjoyed his character design) for many, many years, sitting down to watch it just never crossed my mind. And then it popped up on Netflix. And wow, those first five minutes don't hold back any punches, huh.

I liked it, overall. I grew up watching Poltergeist to the consternation of my parents, so the gore SFX felt nostalgic after the initial "oh wow", but just checking, the only sympathetic character was Kirsty, right? I think I sat for most of the movie with a pinched face because I could not fathom how Julia felt any love whatsoever for Frank. Sure, I gagged a little when he stuck his half-formed digit in her mouth, but that's just the fun of the movie. But her motivations were very ??? throughout and was... was Frank supposed to be sexy during his flashback in the rain?

On the other hand, I can extremely appreciate a film where the main characters are so villainous that I end up rooting for the actual villains, even if the concept felt a bit like Little Shop of Horrors meets the Mummy. The prospect of world-building in later movies is very appealing to me, however, so I think I'll take a gander at the rest of the series.
posted by lesser weasel at 12:45 AM on November 19, 2019 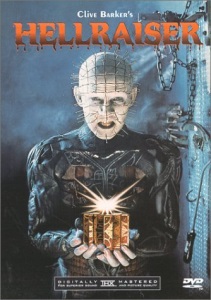