A man befriends a fellow criminal as the two of them begin serving their sentence on a dreadful prison island, which inspires the man to plot his escape.


Chicago Reader: This 1973 feature is the archetypal “important” motion picture: no sense of complicity between filmmaker and spectator, no depth, no ambiguity, no production value spared, plenty of running time and pomposity, and a desperate sense of trying to do everything and please everybody. Director Franklin J. Schaffner has succeeded in making a two-and-a-half-hour film that seems like six.

Roger Ebert: Sophia Loren was once in a movie named “The Pride and the Passion,” which involved hauling an enormous cannon halfway across Europe through deep mud. By the time they heaved the cannon into position, I had long since stopped caring, and even had a little difficulty remembering why they were doing it in the first place. The movie had expended enormous energy without cause.

“Papillon” is a movie like that: an expensive, exhaustive, 150-mintue odyssey that doesn’t so much conclude as cross the finish line and collapse. It has been outfitted with expensive stars and a glossy production, but it doesn’t really make us care. When Steve McQueen finally escapes from Devil’s Island we’re happy more for ourselves than for him: Finally we can leave, too.

Empire: And while his script constantly reaches for poetic symbolism, director Franklin J. Schaffner wants to rub our faces in the gruelling hardships of what ostensibly he is portraying as Hell (it is after all dubbed “Devil’s Island” and is a leper colony). It’s an exhausting experience, enduring such relentless and vivid cruelty, and the thwarted and repressed agonies of Papillon’s various escape attempts.

The film is at its best in the lead’s relationship, softly hinted as homoerotic, but more about mutual necessity. Hoffman’s Louis Dega is a hunted man, even here in capture, a master-counterfeiter who still has money concealed about his very person, who needs protection. Papillion, in turn, will get the finance for his escapes. But overall the film has taken the notion of a prison sentence a little too literally.

NYTimes: My tolerance for this kind of make‐believe is fairly high. I like hairbreadth escapes and survivals against all odds, but I must admit that about three‐quarters of the way through the two and a half hour of “Papillon” my tolerance was sorely tested.

It happened when Papillon is befriended by a tribe of Central American Indians presided over by Chief Victor Jory. They inhabit what looks to be the West Indies' newest and most chic island resort and cabana colony and, to be hospitable, present him with his very own Dorothy Lamour, a maiden named Zoraima who is played by Ratna Assan.

This finally establishes “Papillon” as the sort of movie Hollywood supposedly doesn't make any more. Though its native girls go topless and the production budget was huge, “Papillon” is the escapist movie we used to go see on Saturday night without even bothering to read the marquee.

Inside the Brutal French Guiana Prison That Inspired ‘Papillon’
posted by MoonOrb (3 comments total) 3 users marked this as a favorite
It's a little long, but I like this movie quite a bit.
posted by Chrysostom at 8:23 PM on May 15, 2018

I haven't seen the movie in many years, but I remember liking it a lot more than those reviews would have suggested. I'm tempted to rewatch it just to compare my positive memories with the much harsher critical assessments.
posted by Dip Flash at 6:57 AM on May 16, 2018 [1 favorite]

Its been years since I've seen this and don't much remember much of the plot details, but I remember the cinematography being absolutely gorgeous - and that a prison island as being kind of romantic. 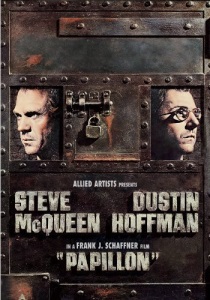