But there is no joy in Mudville- mighty Pam has struck out.

It only took five episodes—i.e., more than half this season’s entire order of shows—but Archer has finally zeroed in on what makes Danger Island great: Stick Pam and Archer somewhere, give them something to fight about (with Crackers on the outskirts to crack jokes and catch an occasional “Shut up, bird”), and let the magic happen. Sure, I could quibble with some of “Strange Doings In The Taboo Groves”’ other choices—Lana’s continued exile to a single scene per episode (something that also plagued the first half of last year’s Dreamlands) continues to grate—but it feels petty to ding an episode too hard when it not only gives us Archer’s blundering, accidental proposal to his personal Chewbacca, but also the return of Charlotte Vandertunt: Would-Be Arsonist.

While no one was looking, the relationship between fictitious versions of Pam and Archer grew into one of the most compelling in the history of the series, waking or no. Last week’s half-hour excelled by developing a dynamic that began in earnest a few episodes prior, but could still draw on years of preexisting percolating tensions. Danger Island has reimagined Pam as Archer’s burly-yet-feminine right-hand man, the gendered language of which Archer has fully taken to heart. As we learn in “Strange Doings in the Taboo Groves,” Pam Poovey is a human woman complete with the attendant wants and needs, but Archer treats her like something between a manservant and a man — and it all comes to a head in an unanticipated confrontation rivaling the most charged interactions between Archer and Malory, heretofore the show’s most richly developed.

posted by filthy light thief (5 comments total) 2 users marked this as a favorite
"What about him?"

But you can! Here's Weir of Hermiston by Robert Louis Stevenson (synopsis with link to copy on Archive.org). And here's the RLS summary for Treasure Island, as well as a copy on Archive.org.
posted by filthy light thief at 10:17 AM on May 25, 2018 [2 favorites]

And oh my gosh is this a ... homage to Tale of the Gold Monkey. There is a ton of material that is ... lifted from Gold Money (so much of the setting, much of the cast, big chunks of the plot about the idol, and now the misplaced monkeys, which is probably a jab at Gold Monkey having a tribe of super-intelligent monkeys on an island in the South Pacific), but there are definitely elements that make it clear that the story is being filtered through Archer's brain.

The "old magical bird" ("That's not normal bird behavior") and calling out the misplaced howler monkeys (who are around 5,500 miles / 9,000 km west of the South American jungles where they would normally be found) who recognize the threat of a gun seem to imply that there's a bigger story than sloppy writing and cribbing from a retro series from the 1980s. At least, that's my hope, but it's unclear how far they'll get in another 3 episodes, or about an hour of runtime.
posted by filthy light thief at 11:09 AM on May 25, 2018 [1 favorite]

Lana’s continued exile to a single scene per episode

Which makes me wonder if there were scheduling conflicts with Aisha Tyler.

Which makes me wonder if there were scheduling conflicts with Aisha Tyler.

Last season I think she was almost on part-time because of her directorial debut and becoming a main cast member in Criminal Minds (?), and she seems to always be branching on a new thing, so yeah, I'm guessing the window to record her lines isn't as large as when Archer started and she was mostly a bit player/guest star.

Speaking of Criminal Minds, I'm kinda surprised Paget Brewster never appeared on Archer, it's something that sounds totally in her ballpark. Although, yeah, probably also has too many gigs running to add another one.
posted by lmfsilva at 1:01 PM on May 25, 2018 [1 favorite] 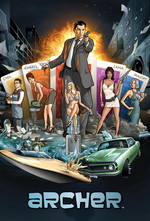