A debonair, adventuresome bank executive believes he has pulled off the perfect multi-million dollar heist, only to match wits with a sexy insurance investigator who will do anything to get her man.


Roger Ebert: And now, at last, We have a whole movie devoted to photography, and the director is allowed a few minutes to show his tricks.

The movie is "The Thomas Crown Affair," possibly the most under-plotted, underwritten, over-photographed film of the year. Which is not to say it isn't great to look at. It is. The photography is by Haskell Wexler, who won an Academy Award for his work on "In the Heat of the Night."

But that was a narrative film; that is, it had a story and told it. I am not so old-fashioned as to demand that every movie explain itself, that every plot mesh like the great grind-wheels of Victorian literature, that everything be tidied up at the end. The best directors often choose mood and effect instead of plot, as film. But Norman Jewison, in "The Thomas Crown Affair," hasn't brought it off. The film is a major disappointment, because Jewison promised and achieved so much in "The Russians Are Coming" and "In the Heat of the Night."

The problem is that he pretends to tell a story, but it doesn't hold up. Thomas Crown (Steve McQueen) is a rich Bostonian who robs banks. Jewison wants us to think he has a terrifically complicated plan, and the film begins with a series of multiple images: a phone booth in the upper right corner, an index finger dialing a number down below, a guy waiting somewhere else. This technique was used effectively In "A Place to Stand" at Expo, and a simpler use of multiple images was introduced in "Grand Prix."

But when McQueen finishes his phone calls and Wexler finishes his multiple images and Jewison finishes his enigmatic double-reverse plot twists, the balloon explodes. All Crown's plan amounts to is that he calls a lot of guys in different places and they go to a bank and rob it. Big Deal. Clyde Barrow, where are you when we need you?

After the initial suspense falls off, we're left with a love affair between McQueen and Faye Dunaway, who plays the insurance investigator.

The Hollywood Review: Lacking the depth but infinitely more voguish than other yeoman directors, like Gordon Douglas for instance, Jewison resists the human element in the film. When, almost an hour in to the film, the interplay between McQueen and Miss Dunaway begins to crackle with interest of its own, he exiles them behind the flip-flop of windshield wipers. As Miss Dunaway and Burke begin to fence verbally while walking, the camera loses interest and turns away to track their obscured reflection in a window pane.

Jewison takes greater care when executing a 360-degree pan or sliding the camera through the colored smoke screen left in the wake of the robbery. Even when the judgment is capricious, the execution is expert, Haskell Wexler's Color by DeLuxe photography exploiting hidden camera techniques to invest the mannikin parade with the authenticity of interior and exterior locations, camera operator Ralph Gerling rating heaps of praise for his execution of the assigned acrobatics.

The masquage opticals are the work of Pablo Ferro Films, and while the masking is at times a bit ragged, the resolution is generally good. The earlier use of the technique, bringing together, yet separating McQueen and the men he has anonymously hired to do the heist, is logical and sound. Later application merely pads. Jewison eschews the use of dissolves, as is the present vogue, but his reliance on slow focus scene intros tends to argue in their favor.

For McQueen, it is less a change of image than of costume, the glove fit of an expensive Ron Postal wardrobe accomplishing a smooth transition from rugged rebel to rich rebel in a role that is otherwise well tailored to his personality. The decision to allow McQueen on an awkward and extended laugh scene is compounded by an uncomfortable reprise. Miss Dunaway, whose every walk is given a camera angle for each facial plane, is perpetually fascinating from the sleep tossed natural radiance of her morning brunches, competing with zoom pullaways to distant buildings, to the red-filtered glow of a scene played in a sauna bath. Fortunately, she can wear practically anything with a command of fashion and may be able to spare Thea Van Runkle's more excessive costume absurdities from quickly dating the picture.

Diabolique Magazine: Faye Dunaway is fantastic here – alluring, funny, and ice cold. In fact, she’s so good McQueen is hardly a match for her. As good as this film is, McQueen doesn’t do any of the heavy lifting here. No doubt he’s enjoying himself, but he spends most of the movie standing around laughing to himself or engaging in douchebag rich-boy activities. While at times his aloofness crosses over to cool, the role simply demands nothing of McQueen, so he’s a shadow of the actor we see in The Getaway (1972).

Maybe that was intentional? It only hurts the movie when we are subjected to several minutes of McQueen flying an ultralight plane, or playing polo, or golf, or two insufferably long scenes of McQueen driving a dune buggy. These scenes should have been a fraction of their length and nothing would have been lost on the message that Thomas Crown is a douchebag rich boy who engages in douchebag rich-boy activities.

Paris Review: Thomas Crown’s Global Vision
posted by MoonOrb (3 comments total)
I think the remake is a better film but the original has titles by Pablo Ferro and introduced America to "The Windmills of Your Mind" (for which it won an Academy Award for Best Original Song) so there'll always be a place for it..
posted by Nerd of the North at 4:56 PM on June 14, 2018 [2 favorites]

Seconding that the remake was better. I saw it first and then was all "really, rich dude robs banks for fun?" about this one.
posted by jenfullmoon at 5:45 PM on June 14, 2018

Sexaaaay. The Brosnan one that is. Like that one Duplicity movie with Julia Roberts and George Clooney but kind of way better.
posted by karmachameleon at 8:43 PM on June 27, 2018 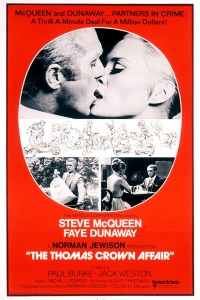