Episodes 5 - 8, Wow, how much does Satoru's mom rock? Also, Satoru pulls out all the stops in an effort to save Kayo and the others and we learn the personal cost of this revival. This stretch is the emotional heart of the series.

* Satoru encounters the owner of the mysterious phone number found in his Mother's hand.
* Satoru is betrayed(?) and turned in to the police. Not sure if you can call it betrayed as the motivation seems to be one of concern.
* Satoru returns again to 1988, and is outwitted by Kenya into coming clean
* Satoru conspires with his friends to keep Kayo safe
* While Kayo is alone in the hideout, a sinister stranger enters
* Did I mention Satoru's mom rocks yet? The former(?) journalist packs some "extra lunch" for Satoru (does she know?).
* Kayo is finally able to give Satoru his belated birthday present. No, I'm not crying, you're crying.
* The sinister stranger's visit becomes more sinister
* Yeah, about Satoru's mom rocking, she does it again.
* We learn how rough Kayo's home life was, and Satoru's mom comes through again.
* Dammit, I said I'm not crying, the show just generates dust or something.
[ This is a good time to reflect back on the scene a few episodes ago where Kayo was asking if Saturo cared about his Mom]
* Kayo returns home to face her mother.
* And for a hat trick, it's Satoru's mom who is on the spot yet again.
* Kayo is finally able to separate from her mother.
* Saturo dreams as AIri passes him by without any recognition.
* Saturo gets some fatherly advice from Mr. Yashiro, and learns of Mr. Yashiro's secret candy addiction.
* Not sure what to do next, Saturo reflects while listing to the theme song of his Hero, Wonder Guy.
* With Kayo saved, Saturo and friends focus on saving the next victim Aya Nakanishi.
* Satoru gets interrupted on his quest to guard Aya by his Mom's shopping trip, but Mr. Yashiro, who just happened to be nearby offers them a ride home. Another fatherly-like interaction takes place.
* Satoru finds Aya alone, and attempts to make friends ... and is soundly rejected by a creeped out Aya.
* Kayo shows up at school again, and Saturo ... well Kayo said it best "Baka Nano".
* Aya suprises the gang in their secret hide out, and makes a new friend.
* Satoru and Kayo revisit the "Christmas Tree" in the daytime, Saturo comments on how plain it looks in the day, and we again quote Kayo's short but to the point response, "Baka Nano"
* Satoru finds out he's a hero to somebody
* Satoru runs into Sawada for the second (first?) time.
* Satoru suspects Misato might be the next victim, but Kayo's attempt at a peace offering is rebuffed.
* Satoru goes to the hockey game to keep an eye on Misato, but did she just get kidnapped in that truck?
* Mr. Yashiro is again there when needed, and they follow the truck to see if Misato is there.
* Satoru drinks the tea offered by Mr. Yashiro.
* Suddenly everything disturbingly clicks into place
[ Mr. Yashiro has a flashback scene that was a bit disturbing. feel free to skip it]
* Saturo's mom waits for Saturo to come home ...
* We begin to learn the heart-wrenching cost of this revival
posted by forforf (1 comment total)
I just love how this series makes it clear how much Satoru's mom loves him. It provides some nice context to the first episode.
posted by forforf at 3:19 PM on August 13, 2018 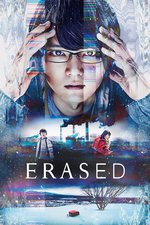