Team Voltron returns to Earth, but are they too late to save it? [major spoilers after the cut]


After getting sidetracked, the Paladins form an even closer bond with their lions, and return to Earth, only to find it’s been conquered by Commander Sendak!

OK, I have to say that this season was TOTALLY RIDICULOUS and TOTALLY AWESOME, especially the last two episodes. Shiro and Sendak fighting hand-to-hand combat on the hull of a spaceship! As the spaceship enters Earth’s atmosphere and crashes to the ground! And Shiro survives this, without his helmet!

But! Then there’s still one more episode to go this season! So in episode 13, completely gratuitously, without explanation, an evil giant robot just shows up out of the blue, and starts whaling on Voltron. So Earth has to form a second, even bigger giant robot that fights alongside Voltron! It’s BONKERS, and yet it WORKS COMPLETELY, with the usual impeccable action scenes that we’ve come to expect from Joaquim Dos Santos, a whole new set of awesome secondary characters, and a vastly upgraded musical score over previous seasons.

I've only seen the first few episodes of the first season, and so far, it's a blast. There's a great balance between action and humor, and the voice acting is great, though TBH, I really started paying attention when I heard Tyler Labine as the voice of Hunk. Unfortunately, my kiddos find the action to be a bit too much to take (they're 3.5 and almost 7, so their thresholds for "too scary" are fairly low, and a bit arbitrary ;)), so I haven't watched more.
posted by filthy light thief at 1:16 PM on August 14, 2018

I'm only three episodes into S07 so far, and have to take a moment in appreciation of this show's ability to balance multiple tones and levels of canonicity, and its willingness to occasionally dispense with the high space-opera for some wacky intertextual fan service. They've done it before in S02's "Space Mall" (basically Paul Blart in space), S04's "The Voltron Show!" (the team makes their own Super Sentai show), and S06's "Monsters & Mana" (the team plays D&D), but this season's game show episode "The Feud!" was *chef-kissing-fingers.GIF*
posted by Strange Interlude at 12:06 PM on August 18, 2018 [2 favorites]

I pretty much have enjoyed the season, especially as they've slowly built up what the paladins can do with their lions when they put their minds/hearts to it. I'm also completely creeped out by Shiro's floating arm. IT'S WEIRD. GIVE HIM BICEPS.

I know there was a lot of consternation among LGBTQ fans when Shiro's partner was killed (I saw folks online swearing off the show, quitting, etc). I think there's substance to this complaint given television's long history of killing off LGBTQ characters and it was a really poor decision to take by the writers. Sure, yes, Shiro essentially broke up with Adam by going on the mission, so it was an "ex" boyfriend/partner that was killed - but no one else among the lions had a family member or former loved one killed. I think it would have been far more interesting for Shiro to return and deal with the ramifications of him choosing mission over love.

I loved the Atlas....but geez, the final episode was bonkers. They introduced Atlas-bot in a way that made sense, but timing wise, I didn't quite get it. What purpose was really served by having the ship transform only to be knocked silly by the surprise mecha at the end? Other than giving Voltron a brief breathing space (which ship form Atlas could have done), it did nothing at all to forward the story more than if Voltron had had the exact same difficulty without its interference. I think the arrival of the new mecha would have made a good enough cliffhanger, but ah well.

The time jump was darn respectable, I appreciated that twist. Cosmo the wolf ROCKS. I was scared to death they were telegraphing his death in that episode by having that weird Seinfeld ripoff show Kramer's character being grievously wounded/killed. Oof. I'm so glad I was wrong. The animation in the show has simply gotten better and better as it's continued (the music...not so much).
posted by Atreides at 12:08 PM on August 20, 2018 [2 favorites]

I just finished binging all 7 seasons. I had been putting it off for a while, and it was definitely worth all the nights I stayed up watching. I had vague memories of the old series when I was growing up, and I remembered that it was mostly an animated Power Rangers, equally cliche and probably didn't age well, so I didn't think this would be much of an improvement. But holy crap! I can see why people mention this show all the time on the internet. The storytelling and the characters far exceed anything in the same genre now, animated or live action.

The bonkerness of "connect with your lion" is new to me (they didn't have that in the original right?) but it allows for hand-wavy no-need-for-details plot pivots that doesn't drag the story down. In fact, I found myself noticing that they could've gotten out of more scrapes if they had just feel the lions more. Like when the Zaiforge cannons array was about to fire on Earth and both the Atlas ship and Voltron were pinned down trying to attack Sendak's ship, then Shiro told Voltron to bail on Sendak and go after the cannon array instead, they assumed they couldn't take out all 6 cannons in time (even though they only needed to take out 5 to cripple the cannons enough to not destroy Earth). As they were coming up with the plan to use the reflecting discs to block the beams, I was wondering why they didn't just bust out the multi-targeting shoulder cannon from the yellow bayard and blast at the array.

But that's my one gripe against shows like this is that they tend to underuse or overuse an ability of the hero depending on the plot. By my standards though it's on par or even better than other great written shows.
posted by numaner at 11:42 AM on September 17, 2018 [1 favorite] 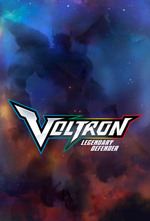