For anyone who grew up on Disney's 1950 "Treasure Island," or remembers the 1934 Victor Fleming classic, this one feels like an impostor.

I am not concerned about technical matters. I do not question why space ships of the future would look like sailing ships of the past. I can believe they could be powered by both rockets and solar winds. It does not bother me that deep space turns out to be breathable. I do not wonder why swashbuckling is still in style, in an era of ray guns and laser beams. I accept all of that. It's just that I wonder why I have to. Why not make an animated version of the classic Treasure Island ? Why not challenge the kids with a version of an actual book written by a great writer, instead of catering to them with what looks like the prototype for a video game? These are, I suppose, the objections of a hidebound reactionary. I believe that one should review the movie that has been made, not the movie one wishes had been made, and here I violate my own rule. But there was something in me that ... resisted ... this movie. I hope it did not blind me to its undeniable charms.

Plus a recent FPP
posted by zinon (8 comments total) 1 user marked this as a favorite
I remember this movie fondly, for exactly the opposite of the reason that Ebert objected to. Why not set it in space?

I mean, I guess you can question the aesthetics of Treasure Planet, but it seems like a strange row to hoe. Why have Star Wars in space when it could be about a band of earthly rebels fighting an earthly empire? Why have elves in The Lord of the Rings when humans would do just as well? Why have any fantastical elements in a movie at all? Why can't all movies be true stories that teach moviegoers important morals?

It's not just the visuals that are different, Treasure Planet plays pretty fast and loose with the source material. And why bother making yet another version of Treasure Island when, at the time Ebert wrote his review, there had already been close to a hundred adaptations across stage and screen, including several previous adaptations set in space.

I actually saw this for the first time just very recently, and I think this is one of those "two kinds of people" things: people who need a reason to want space pirates, and people who definitely don't and then got space pirate dad and oh my god I cried so much and it was amazing.

I miss Deep Canvas. This was one of the only films to really take advantage of that unique look (and Tarzan of course)
posted by selfnoise at 6:51 AM on August 22, 2018 [2 favorites]

I think I had aged out of this kind of movie by the time it came out, and never really heard anything about it except the premise and that teaser poster...But I always thought it was a cool premise, and what a gorgeous poster.

My son and I watched this last year when we watched 5 or 6 different versions of Treasure Island while we were reading the book (in case you were curious, surprisingly, the Charlton Heston one was the best and closest to the book). Neither of us had seen this version of it. So we were both coming to it free of much baggage other than knowing the story and not having a particular favorite version.

You know it is surprisingly watchable. Certainly flawed but we were never overly bored with it. The aesthetics of it was a bit of a gamble but I think it works overall. Good voice cast. Its reputation as a disaster seems to be less to do with what the movie actually is and more about the time the movie was released. Which I think is a bit of a shame.

That review from Ebert is an interesting one. For a certain generation of man, Treasure Island is an undeniable touchstone. They would have consumed multiple versions of it - comics, movies, TV... As well as it being a big part of their imaginative landscape - my dad remembers playing Long John Silver as a kid. So to Ebert's credit he acknowledges this right off. Cranky he may be (though I'd argue it is his cranky reviews that are the most interesting) he is reviewing the film honestly. He didn't hate the film and gave it 2 and half stars which is pretty acceptable for him.
posted by Ashwagandha at 5:48 AM on August 23, 2018 [3 favorites]

I'm of a totally different demographic than Ebert, and I kind of agree with that review. Treasure Island set in space might have been cool, in the way that The Seven Samurai as a Western set in feudal Japan, or Clueless is Emma refracted through late 90s Valley girl, is cool.

But that's not what Disney gave us. Instead, you got the sense that execs wanted to jazz up the story with Something Post-Modern, and ended up kerplonking a bunch of 18th c. ships in a 31st c. world.
posted by basalganglia at 4:17 PM on August 27, 2018 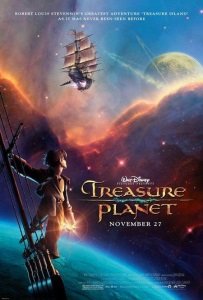