A young adventurer named Milo Thatch joins an intrepid group of explorers to find the mysterious lost continent of Atlantis.

You will note among this crew no dancing teacups, even though the movie was directed by Gary Trousdale and Kirk Wise, who made the wonderful "Beauty and the Beast" for Disney. Perhaps that's because of the influence of a comic book artist named Mike Mignola, previously unknown to me but described by my colleague Elvis Mitchell as the creator of an underground comic character named Hellboy; his drawing style may have something to do with the movie's clean, bright visual look, which doesn't yearn for the 3-D roundness of "Toy Story" or "Shrek" but embraces the classic energy of the comic book style. You especially see that in the movie's spectacular closing sequence--but I'm getting ahead of the story.

The story of "Atlantis" is rousing in an old pulp science fiction sort of way, but the climactic scene transcends the rest, and stands by itself as one of the great animated action sequences.

Trailer
posted by zinon (6 comments total) 3 users marked this as a favorite
Was it just me or did they just straight up steal a character from Titan AE in this movie? I remember there being two very similar snivelling mole-like characters in each one.
posted by Space Coyote at 6:58 AM on August 28, 2018

This was only my second watch, the first being right after it came out. So I'd forgotten almost everything about it. I'm of two minds about it. It's a very enjoyable movie with great acting and visuals. The pacing is about perfect and the story predictable but not in a bad way. But, even granting Atlantean Tech is Magic, the stuff they gave Rourke was too much. I'll give a pass on the futuristic submarine fleet and steam powered drilling machine since they were trying to get to Atlantis. But the balloon helicopter and fighter plane catapults? Putting aside just how impossible they are, why would Rourke bring them? Finally, I was a bit surprised at how violent it was, so many faceless goon deaths. Definitely a darker movie than I remember.

And, with respect, I would hardly call Gune sniveling. While both Gune and Mole are a bit of the Ditzy Genius/Genius Ditz (no idea why those are different tvtropes pages) I would say they're fairly different characters. Gune is much more of an innocent Absent-Minded Professor type.
posted by zinon at 6:56 AM on August 29, 2018

There is always a need for more Don Novello in the world, so on that count this movie more than justifies its existence.
posted by AlonzoMosleyFBI at 12:08 PM on August 29, 2018

My friends and I have started playing a new tabletop campaign with a kind of informal "rule of fun." Which is to say, when in doubt, what winds up happening is not what necessarily what the dice or rules or laws of physics say, but the most fun thing that could be expected to happen in a given situation. It's been an excellent addition.

This movie seems to go by the same rule, and I love it for that. The setup is fun, the characters are fun, the plot twist is fun, the exploration and discovery is fun, the climax is fun. It wears stylish pulp nonsense on its sleeve and executes it beautifully.

I remember really hoping at the time between this, The Iron Giant, Treasure Planet, and Titan AE, American animation was poised to start really engaging with sci-fi, but The Iron Giant seems to have been the high water mark of that little movement.
posted by Phobos the Space Potato at 1:04 PM on August 30, 2018 [2 favorites]

This movie really stands out from the typical movie fare. First, there's no music! For the last decade, every major Disney film was built on amazing musical numbers, even the so so Tarzan was lifted up by Phil Collins contributing to the soundtrack. Here? Just a score. Second, Disney did steampunk before steampunk was really entering its groove. I didn't see it coming and it's play upon the world as imagined by Captain Nemo is pretty dang cool and fun.

I felt like the main female protagonist also stood out in a non-typical Disney way, but for the life of me, I can't remember the details of her character, other than she was pretty hardcore.
posted by Atreides at 9:42 AM on August 31, 2018 [1 favorite]

I remember really hoping at the time between this, The Iron Giant, Treasure Planet, and Titan AE, American animation was poised to start really engaging with sci-fi, but The Iron Giant seems to have been the high water mark of that little movement.

I could argue for Lilo and Stitch as the high water moment, since it really felt like something out of a classic SF "shaggy alien" story. I could see it being serialized in a 1950s SF magazine, up to and including those colorful spacecraft on the cover.

But I have a special soft spot for Atlantis, even though, or maybe because it was obviously influenced by the anime "Nadia Secret of Blue Water", which was in turn riffing off of "Island in the Sky Laputa". But Atlantis has its own charms; the adorable Milo and badass Kida have an excellent rapport. The character and architecture designs were wonderful, and so very different from the standard European setting.

Also, this film was excellent for diversity in the supporting cast, in a way that wouldn't be matched by Disney for over a decade.

The only problem I have with it is it's too short. But that may be because I feel like it really deserved its own TV series.

I felt like the main female protagonist also stood out in a non-typical Disney way,

For a start, if you asked her, she would have let you know SHE was the main character of the film. I mean, except for his area of expertise, Milo was just keeping up with her. It's an utter crime that Kida isn't listed along the official Disney princesses.
posted by happyroach at 4:13 PM on September 4, 2018 [1 favorite] 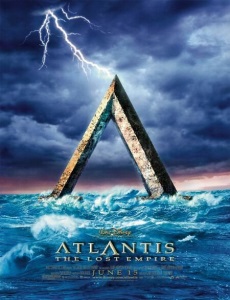