The year is 1327. Franciscans in a wealthy Italian abbey are suspected of heresy, and Brother William of Baskerville arrives to investigate. When his delicate mission is suddenly overshadowed by seven bizarre deaths, Brother William turns detective. His tools are the logic of Aristotle, the theology of Aquinas, the empirical insights of Roger Bacon—all sharpened to a glistening edge by wry humor and a ferocious curiosity. He collects evidence, deciphers secret symbols and coded manuscripts, and digs into the eerie labyrinth of the abbey, where “the most interesting things happen at night.”
posted by perplexion (11 comments total) 8 users marked this as a favorite
I recently asked MeFi for books that feature intrigue, dense plots, and battles of wits. I also scoured a ton of other recommendation threads on MeFi and otherwise. I've read and watched a fair number of the most common recommendations at this point and it's brought home to me just how singular The Name of the Rose really is.

Its plot structure, in particular, is unique. You have, at the highest level, the world-historical plot of the heretics versus the Pope versus the Emperor. A level downwards, you have the power struggle between various factions for control of the abbey, and a battle for access to and control of the knowledge it contains. A level further down, and you have the love pentagon between the various residents of the library, and the love rectangle between the cellarer, Salvatore, the girl, and Adso.

You can find other works that have the same multiplicity of plots, but they typically span over multiple years, locations, and books. Umberto manages to squeeze all of that into seven days and a single abbey. He does that by distilling each plot into the absolute bare minimum number of events needed to convey the essence. The emperor-pope-heretic plot hinges on a single meeting, followed by a trial. The love pentagon's main plot occurs over the course of just one evening.

Despite the length of the book and the number of long philosophical digressions, there is really not an ounce of fat. Each scene serves to propel the plot forward. I just finished The Secret History, which was great, but was the opposite of The Name of the Rose in that sense- Tartt lingers over every event, describing every aspect of it in painterly detail, while Eco will discover a body and complete its autopsy in two pages.

As a result, The Name of the Rose manages to combine the urgency and breathless excitement of a crime thriller (Ocean's 11, in particular, had the same breathless pace), with the expansiveness and worldbuilding of an 11 volume fantasy epic. I've yet to find another book that manages to do the same.

It's not perfectly plotted- I never bought that Malachi killed Severnius out of jealousy, for instance- but it still has so many great moments. The murder weapon in particular is pure genius.

I could talk about so many other aspects- I haven't even touched on the sheer number of fascinating philosophical questions brought up by the book, its treatment of epistemology, semiotics, religion, and how perfectly Eco binds each of these abstract questions to the plot- but this is long enough already. It's really a perfect book and I'm frankly astounded it was his first novel.
posted by perplexion at 10:12 AM on September 12, 2018 [11 favorites]

This might be my favourite book; I'm a really sloppy reader and while it's a dense but not difficult read, there's always something in it that I completely forgot that delights and surprises me when I reread it.
posted by Alvy Ampersand at 11:21 AM on September 12, 2018 [2 favorites]

I've got to give this a reread; it's been years and I was probably younger than Adso when I read it.
posted by asperity at 4:14 PM on September 12, 2018

there is really not an ounce of fat

I remember a description of a doorway that felt pretty fucking superfluous.

I don't have a copy of the book anymore but I think there's something in the foreword about how Eco fended off criticisms that the first hundred pages were dense because he wanted to weed out the readers he didn't care to be writing for. Maybe that was in reference to another book.
posted by fleacircus at 4:48 PM on September 12, 2018 [2 favorites]

This is one of the best books I ever read! not only for the enchanting story itself but because it introduced me to who Umberto Eco was and sent me on a decades long voyage of exploring his works on language and semiotics. I LOVE this guy! His works make me think, make me learn more just to keep reading, make me question how I understand the world around me. I just keep collecting and collecting his texts. "Mouse or Rat: Translation as Negotiation", "En Que Creen los que No Creen", and "The Role of the Reader" are favorites, and I have a few that are unread that I am dying to get to ASAP.
posted by alchemist at 12:38 AM on September 13, 2018 [1 favorite]

The murder weapon in particular is pure genius.

I don't think I've been ever as worked up over the destruction of an artifact in a story as I was when the murder weapon was destroyed. What a loss! Curses!
posted by homunculus at 3:29 PM on September 13, 2018 [3 favorites]

This book. The way that William's deductive powers seem so infallible at the beginning, and so grounded, and yet still fail to prevent tragedy after tragedy: the reader gets drunk on his perspicuity and then endures the worst hangover possible when all of that wisdom washes up against the hard rock of stronger forces that are ultimately in charge of the greater narrative. And as heady as it is, it's such a sensual delight: the alpine abbey hunkering down under winter snows, the dark corners of the Aedificium, the blood and glass and stonework that gives texture to everything that happens in the abbey.

I admit to finding some of the extended descriptions of the tableaus in the spandrels and columns of the church to be tedious. I read these as an attempt to impart on the reader the terror and depth of a body of knowledge that even these dedicated adherents and scholars must be humbled by, as well as a nod to the semantic art of list-making, and so I appreciate them on an intellectual basis while also finding their ultimate effect to be a little lacking, but, you know, musicians know that consonance's sweetness can only be emphasized in contrast to the sour dissonance that precedes it, so I'm willing to grant that the book's most effective moments are only as strong as they are because of those affective lacunae. Even if not, I love maximal works, where a skilled creator indulges themselves without regard to some crystalline structure that they might otherwise aspire to, because what could be more human?
posted by invitapriore at 6:17 PM on September 14, 2018 [6 favorites]

Thank you for reminding me about this book.

I realised that I grew up in a house where books like this would be lying around. And as bored teenagers we would pick them up and start reading. Such an enduring enjoyment. Thankfully my 88 yr old father is still alive. So I called him and spoke about my appreciation.

Of course I'd like to provide my daughter with the same opportunity. She's currently 9 yr old. So I have some time left to slowly optimise my book collection. I have been getting nice old hard cover editions of the books that are really worthwhile from approx the last 100 years. And doing away with books that on hindsight weren't that fulfilling.

This book was stunning, and I have acquired the Companion to it for the next time I re-read it. The first reading made me get up at about page 4 and get my OED. I liked the movie, too. I did try "Foucault's Pendulum" but, sadly, could not get into it.
posted by MovableBookLady at 1:34 PM on September 15, 2018 [1 favorite] 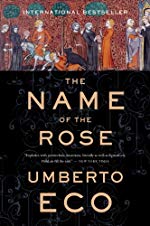