A dramatic retelling of the post-Watergate television interviews between British talk-show host David Frost and former president Richard Nixon that took place in 1977. Based on a play by Peter Morgan.

Ron Howard's "Frost/Nixon" is a somewhat fictionalized version of the famous 1977 interviews, all the more effective in taking the point of view of the outsider, the "lightweight" celebrity interviewer, then in his own exile in Australia. Precisely because David Frost (Michael Sheen) was at a low ebb professionally and had gambled all his money on the interviews, his POV enhances and deepens the shadows around Nixon (Frank Langella). This story could not have been told from Nixon's POV because we would not have cared about Frost.

The film begins as a fascinating inside look at the TV news business and then tightens into a spellbinding thriller. Early, apparently inconsequential scenes (Frost as a "TV star," Frost picking up a woman on an airplane, Frost partying) are crucial in establishing his starting point. He was scorned at the time for even presuming to interview Nixon. He won the interview for two reasons: He paid the ex-president $600,000 from mostly his own money, and he was viewed by Nixon and his advisers as a lightweight pushover.

The whole review is pretty interesting and worth a read.

I dug this movie, much more than I had expected to. Ron Howard, directing a "based on a true story" talking-heads picture? But, it works. Somebody once compared it to a boxing picture, with Frost as the glassjaw learning how to take on the champ.

Be careful around the lightweights of the world. A lightweight may be faster, better-liked, better-traveled, and deeper than they look. Heavyweights, on the other hand...heavy things sink.

This movie would be interesting alongside Oliver Stone's Nixon.
posted by Sticherbeast at 4:32 AM on October 28, 2014 [1 favorite]

Are there full versions or transcripts of the IRL interview available? The only stuff I've seen are an abridged DVD and Frost's memoirs.
posted by brujita at 4:52 AM on October 29, 2014 [1 favorite] 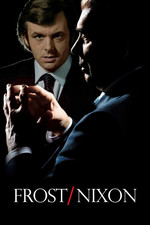