Between two Thanksgivings two years apart, Hannah's husband falls in love with her sister Lee, while her hypochondriac ex-husband rekindles his relationship with her sister Holly.
posted by the man of twists and turns (6 comments total)
I think Max Von Sydow is equally proud of his work here and in Strange Brew.
posted by Chrysostom at 9:59 PM on November 25, 2018

I think Max Von Sydow is equally proud of his work here and in Strange Brew.
posted by Chrysostom

A friend of mine got to meet Max Von Sydow in the late 90s, and asked him about Strange Brew. Von Sydow looked startled, said something like, "oh yes, I was in that!" and started laughing.
posted by the phlegmatic king at 7:10 AM on November 26, 2018 [6 favorites]

Roger Ebert, 4 Stars - "Woody Allen's "Hannah and Her Sisters," the best movie he has ever made, is organized like an episodic novel, with acute little self-contained vignettes adding up to the big picture."

Jordan Hoffman - "Hannah And Her Sisters is 30 years old. Not quite ready for its mid-life crisis, but it's getting close. While most agree that Annie Hall is Woody Allen's masterpiece, there's a lot to be said about this more mature relationship comedy that came nine years later. It may not have the word Manhattan in its title, but this gorgeously shot tableau of the intelligentsia class is as much a fairly tale smooch to Allen's beloved city as any other. It's also a perfect place to start if you've always heard about one of our greatest living writer-directors, but felt a bit flummoxed looking at his enormous resume."

Jay Carr - "For the next hour and 40 minutes, as the film moves through two years and three Thanksgiving dinners cooked by Farrow, “Hannah and Her Sisters” keeps expanding in fresh, funny, rueful, honest, touching ways. It’s one of the best films of the new year, and one of Allen’s best as well. With love and fluency, it zeroes in on the fragmented lives of the sisters and their angst-ridden men. "

Vincent Canby - "With this film, it's apparent that Mr. Allen has become the urban poet of our anxious age - skeptical, guiltily bourgeois, longing for answers to impossible questions, but not yet willing to chuck a universe that can produce the Marx Brothers."

Shelia Benson - "We share his fascination with the patterns and problems of these three women, each of whom is one facet of idealized Woman: the mother, the lover, the free spirit. There is Wiest's ditzy charm and almost crippling insecurity; Hershey's struggle to right herself in this love affair and to do something with her life, and Farrow, caught in everyone's perceptions of her as the strong, unneedy one.

Allen brings these tensions to a stunning peak as all three sisters, burdened with held-in emotions, sit at lunch in an uptown restaurant. As their concerns mount and tensions increase, so does the circling pace of the camera, orbiting round and round them in an echo of their turmoil."

"Hannah and Her Sisters was one of Woody Allen's most financially and critically successful films. Besides the two acting Academy Awards, the film earned Allen an Oscar for Best Original Screenplay, and was also nominated for Best Film, Best Director, Best Production Design and Best Set Decoration."

The Complete Guide To Never Watching Woody Allen Films
posted by the man of twists and turns at 8:51 AM on November 26, 2018 [2 favorites]

Having sisters and a family that had brief period of theater business/life/craziness this film seems incredibly insightful. Need to revisit.
posted by sammyo at 10:08 AM on November 26, 2018 [1 favorite]

Woody Allen lost me with the portrayals of women in Husbands and Wives and Crimes and Misdemeanors. Judy Davis and Anjelica Huston were wonderful as unstable female figures but as one critic suggested -- can't remember who now-- the Judy Davis character illustrates perfectly how, if you tell someone they are crazy often enough, they will be crazy. Watching women go to pieces in these movies gets less and less entertaining.

Hannah and her Sisters, made well before Allen became scandalous, might have seemed fine to me without the later moves. Dianne Wiest's Holly seems like a clear precursor to those other characters now. Needy, unstable, manipulative. I actually like that character, but fuck Woody Allen.
posted by BibiRose at 2:00 PM on November 26, 2018 [5 favorites]

I haven't seen this movie since 1986and I in no way recall my specific complaints, but it is the movie that gave me a life-long hatred of both Woody Allen and Michael Caine, so there you go. Whatever I saw with Allen's female characters here really made me think he was a creepy little shit.
posted by Squeak Attack at 6:39 PM on November 26, 2018 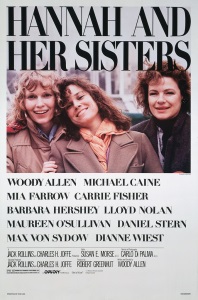