This offbeat action drama from Hong Kong stars Bin Shimada as Riki, a new prisoner at a high-tech penal institution of the future. Riki finds himself challenged by the prison's violent, corrupt guards, and when one of his friends is murdered by the jailers, Riki explodes into a fury of violence as he seeks bloody vengeance against all who would cross him. Riki-Oh: The Story of Ricky has won a cult following for its deliberately outlandish martial arts violence, in which Riki displays the remarkable ability to punch through his victims -- and even blow them up.

This is ridiculously, stupidly, volcanically bloody. I'm pretty sure the filmmakers are about half-kidding, so it's not so much disturbing as truly fucking gross and ludicrous and laugh-out-loud weird.
posted by DirtyOldTown at 8:57 AM on December 4, 2018 [1 favorite]

OTOH, this is the movie where the head-smashing from old Daily Shows came from.

Also: Everyone knows the warden must be the very best at kung fu!
posted by GCU Sweet and Full of Grace at 9:46 AM on December 4, 2018

I think calling Ricky-Oh an "offbeat action drama" is a strange way to describe it. I mean just watch the final battle scene. Apeshit might be more apt?
posted by Ashwagandha at 10:30 AM on December 4, 2018 [1 favorite]

I copied and pasted that from RT. Their subdued phrasing played better than the series of OMG's and swear words I would have managed on my own.
posted by DirtyOldTown at 10:42 AM on December 4, 2018 [1 favorite]

I watched this with a friend years ago after obtaining it from a dodgy torrent site. I never did find the subtitles but that didn't diminish our enjoyment.
posted by AndrewStephens at 4:19 PM on December 4, 2018 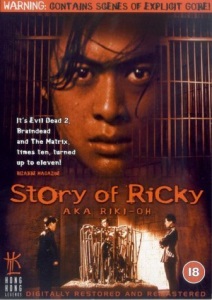