Devdas is an acclaimed 2002 Bollywood romantic drama film directed by Sanjay Leela Bhansali. It is the third film based on Sharat Chandra Chattopadhyay's 1917 novel. Set in the early 1900s, the film follows Devdas (Shah Rukh Khan), a wealthy law graduate who returns from London to marry his childhood sweetheart, Paro (Aishwarya Rai). When his own family rejects the marriage, he descends into alcohol, ultimately leading to his emotional deterioration and him seeking refuge with a courtesan.
posted by DirtyOldTown (8 comments total) 3 users marked this as a favorite
Comrade Doll, upon walking in while I was watching this: Who... who... who is that?
Me: That's Aishwarya Rai. Famous Indian actress.
CD: Oh.
Me: She is often referred to as "the most beautiful woman in the world."
CD, after standing motionless and silent for an entire scene: Yes. Yes, that checks out.
posted by DirtyOldTown at 7:56 PM on February 16, 2019 [4 favorites]

Not sure my own thoughts on this matter while this exists.
posted by DirtyOldTown at 8:40 PM on February 16, 2019 [2 favorites]

I first saw this movie years ago, back in 2003 or so, when the Walker Art Center ran a series of Indian films and it, along with A Peck on the Cheek, really furthered my desire to get to know more about the film industry there.

The story had been done a number of times before and since, with Wikipedia listing 17 different versions, and its influence goes far beyond that, though the limits are hard to judge given how popular the love triangle structure is in movies overall and possibly even more in Indian films. (Bhansali's later Saawariya, for example, is not too far from the same model even as it was more specifically based on Dostoevsky's story White Nights.)

The story, to modern eyes, is obviously problematic, relying as it does on finding the plight of Devdas himself to be a compelling hook for the audience instead of, say, finding him insufferable in his own failings. That's something the later movie Dev D kind of attacked more directly, putting more emphasis on Dev's own faults and weakness rather than letting it feel more that he was as much a victim of circumstance. But, even with that being a perfectly reasonable objection, I think there's more to it than that.

I don't want to get too auteury about it, but Bhansali is a really singular director who's body of work keeps circling back to the same themes in slightly different guises, and by slightly I mean sometimes with very little difference between the movies, such as Saawariya and Devdas, or his pair of more recent movies Bajirao Mastani and Padmaavat, to the point where dialogue from one movie could be used without any alteration to explain situations in another.

He has a strong set of recurring visual motifs used from film to film as well in addition to some unusually strong ways of emphasizing architecture in his film worlds as a sort of visual synecdoche for character. His overriding theme is of a sense of being trapped in the world, sometimes metaphorically, sometimes more literally. Equally unusually, almost all of his movies end in a weird sort of emotional triumph through losing. The ends read as unhappy, but the mood is one of release. It's a strange combination and one that few others have followed as persistently as Bhansali.

For me, it feels like the outer layers of his movies are going one way, while the inner layers move in the opposite direction. Taken at face value the characters are hard to "like" and sometimes are downright destructive to their worlds, but the overall gestalt of the movies feels like its pulls away from the character's action as they are and gestures to a larger set of concerns those characters are caught up in leading to them being just part of a larger system of wrong that they must play out. I don't want to spoil any of his other films, which are mostly hugely popular but also heavily criticized for reasons similar to that in the linked piece on Devdas.

As one might guess from Devdas, Bhansali exerts a tremendous amount of control over every aspect of his filmmaking, which gives his movies such a rich look, and as a former choreographer, why his dance numbers are so tied into the overall feel/themes of the movies rather than seeming to be worked around or stuck in for a change of pace. The fantastic Dola Re Dola number is the best example of that.

Overall, Devdas fits with the other Bhansali movies I've seen in that I admire them for their craft, find their overall attitudes hard to easily reconcile, but keep seeking out for being so much their own thing for good or bad. That isn't entirely different, I guess, than how I felt about Bimal Roy and his 1955 version of Devdas except Roy's body of work is a little easier to defend than Bhansali's overall I suppose given the difference of era and themes he worked with.
posted by gusottertrout at 9:16 PM on February 16, 2019 [5 favorites]

Visually, this is gorgeous, bold colors and jaw-dropping use of light, amazing production design... But the base story is retrograde sexist horseshit larded up with some next level purple prose.
posted by DirtyOldTown at 9:17 PM on February 16, 2019

And god yes, the architecture. It reminded me of Argento's use of the dance school in the original Suspiria... almost like a hermetically sealed alternate reality created precisely for and in service of one particular story.
posted by DirtyOldTown at 9:38 PM on February 16, 2019

It might be worth noting that the original story was, so I've gathered, dealing with real problems of crossing class boundaries and parental consent that had much deeper root in Indian society than in some other countries. How vital a consideration that might be today, I can't begin to speculate on other than note there've been complaints about Devdas like the one above but it was also crazy popular so I guess there's some pull in both directions, but either way it's a theme that Bhansali keeps going back to in spite of criticism and worse for whatever reason.

In the same way, my take on his movies is that, while Bhansali is certainly not a feminist by any stretch, his women characters are much stronger than the men. The men are more often ineffectual or unable to escape their circumstance for failing to fully understand it, while the women better see the possibilities, even as they often aren't able to alter things themselves. It's really difficult to say how much of that is intentional or just a recurring theme Bhansali himself may not fully be aware of, but it's constant. That's one of the things that makes his movies so hard to get a tight grip on. What they seem to celebrate and what you see in them below that surface don't align. It's such a defining trait of his movies, no matter how it happens, that it reads as if a major theme.

Yeah, the more I've watched Bhansali's movies the more his use of architecture seems to be pat of some allegorical structure he envisions for the characters, with certain rooms acting as a symbolic link to the character. His use of water/fountains and gardens/greenery as a sort of idyllic locale where the characters are comparatively free is particularly notable. He likes to have his characters walk through the water or in the fountains often at key moments as well.

Here's a link to a Devdas review from someone who writes well about their love of Bhansali movies. My thoughts are a bit different and less admiring than his, but there are a number of areas of similarity and he definitely knows much, much more about the cultural context than I do and he really digs into the details of what he sees onscreen, so it might be worth checking out.
posted by gusottertrout at 10:15 PM on February 16, 2019 [2 favorites]

I think my primary problem is that I just don't buy Devdas as a character. Bhansali treats his irresistibility as a given, something so intrinsic to who he is that women, people in general really, are drawn to him and feel devoted to him. And I really never saw that as merited or properly established at all. Not only is this a kind of naked sexism in and of itself, but the considerably greater dimension given to the women in his life frankly only exacerbates the problem. Truly extraordinary women orient their entire lives around this churlish cad.

I keep thinking about the original Suspiria in comparison to this film, and I think the connection runs deeper than just the elaborate (but someone stagy) sets and color/light design. Much like that film, the director isn't focused on niceties like conventional character development or providing dialogue with much texture. He's got primal, archetypal themes on his mind and, for whatever latitude he's giving the actors to emote within their proscribed roles, they're also trapped like little boats in a diorama. They are pretty things to be admire and ruminate upon while the larger artist moves the pieces around them.

This isn't to say either film doesn't work, only that the extent to which a viewer can invest in this capsule reality likely depends on how they feel about the director's chosen themes and how invested they are in the genre.
posted by DirtyOldTown at 8:38 AM on February 17, 2019

the director isn't focused on niceties like conventional character development or providing dialogue with much texture. He's got primal, archetypal themes on his mind and, for whatever latitude he's giving the actors to emote within their proscribed roles, they're also trapped like little boats in a diorama. They are pretty things to be admire and ruminate upon while the larger artist moves the pieces around them.

Oh, so you have seen other Bhansali films then? Heh. That is more or less his thing, I think it'd be hard even for his admirers to deny it, though they'd defend it using a different perspective on the same. Devdas, from my memory, is probably the least allegorical of Bhansali's movies. (I haven't seen his first two or Black.) They only get more rich and elaborate visually yet simultaneously further stripped down in characterization to essential elements. It's a mixture suited for allegory but hard to take as "real".

Now I'm gonna be hoping you do get a chance to see Padmavati or Bajiaro Mastani sometime since I'd love to hear your reaction to them too, but lord knows I'm not gonna suggest them, especially Padmavati for the controversy it sparked over its ending (among other things).
posted by gusottertrout at 10:19 AM on February 17, 2019 [1 favorite] 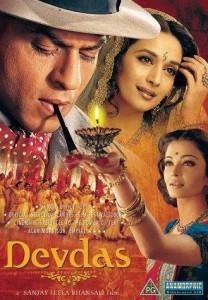