Janet hosts a party to celebrate her new promotion, but once the guests arrive it becomes clear that not everything is going to go down as smoothly as the red wine.

Glenn Kenny, RogerEbert: As serious as things get, “The Party” never stops being funny, sometimes terribly so. “I believe in truth and reconciliation. Truth and reconciliation” says a broken-down Janet near the end, right before biting into her own wrist. Shot in a velvety widescreen black-and-white, performed with utmost commitment by its unimpeachable cast, it’s by my lights the first must-see movie of 2018.

Marilyn Ferdinand, Ferdy on Films: Sally Potter is an independent filmmaker, a term that takes on an expansive meaning when applied to her. Potter is not constrained by custom and expectations when choosing her stories and the ways to tell them. Her experimental bent has produced an adaptation of Virginia Woolf’s gender-bending novel, Orlando (1992), a love story performed entirely in verse form (Yes, 2004), and a satire on the fashion industry meant to be viewed on a cellphone (Rage, 2009). The Tango Lesson (1997), a straightforward look at gender dynamics, drew criticism because Potter chose to star as herself in the film, where she showed off her considerable tango dancing skills. Potter’s new film, The Party, offers another example of her independent spirit, this time her impish impulse.

England’s unofficial anthem, “Jerusalem,” usually signals to moviegoers that they are about to see a tale drenched in the tradition, perseverance and stiff-upper-lipness for which the British are stereotypically famous. Potter’s use of the hymn to introduce The Party is strictly tongue-in-cheek as she prepares to pounce upon the pretensions of her country’s neoliberals and intelligensia.

Interview: Sally Potter on Plotting a Wicked Fun Time with The Party.

The Party Q&A with Sally Potter at the Film Society of Lincoln Center.

Sally Potter, Patricia Clarkson & Emily Mortimer Drop By To Chat About The Party.

Trailer.
posted by sapagan (3 comments total) 1 user marked this as a favorite
And I just heard that Bruno Ganz died yesterday!
posted by growabrain at 8:46 PM on February 17, 2019

RIP Bruno Ganz. A wonderful actor who could play both an angel and Hitler with no (seeming) problems. His character in The Party was a riot. A new age cliché generator who spoke in nothing but catchphrases.

Watched this last night thanks to this FanFare post. It was excellent! I’ve been a fan of Sally Potter since Orlando.

The whole cast was wonderful. Timothy Spall’s shell-shocked performance was hilarious until it was devastating and then it was hilarious again. Patricia Clarkson seemed like she was reprising her character from House of Cards, though funnier.
posted by ejs at 8:33 AM on February 23, 2019 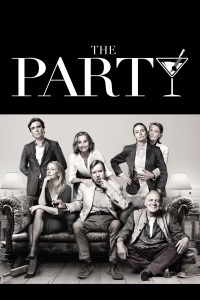