The Speckled Monster tells the dramatic story of two parents who dared to fight back against smallpox. After barely surviving the agony of smallpox themselves, they flouted eighteenth-century medicine by borrowing folk knowledge from African slaves and Eastern women in frantic bids to protect their children. From their heroic struggles stems the modern science of immunology as well as the vaccinations that remain our only hope should the disease ever be unleashed again.


Jennifer Lee Carrell transports readers back to the early eighteenth century to tell the tales of Lady Mary Wortley Montagu and Dr. Zabdiel Boylston, two iconoclastic figures who helped save London and Boston from the deadliest disease mankind has known.
posted by Homo neanderthalensis (4 comments total) 5 users marked this as a favorite
h/t to jessamyn who recommended this book in a metatalktail and I devoured it. It's a lightly fictionalized history tale of the two people who popularized variolation. This was the procedure that preceded vaccination, where a bit of smallpox material from a sick person was put under the skin of a healthy person and hopefully the healthy person got a light dose of smallpox and then was immune forever. Of course unlike vaccination, variolation (also known as inoculation) was much much riskier- it had a level of fatality no parent today would accept. Of course, in the days before vaccination the choice was risky procedure with some risk, or getting full blown smallpox with a much higher risk, so variolation it was! Lady Montagu was a real character, and while the book is lightly fictionalized, most of her crazy adventures are 100% fact. Dr. Boylston's tribulations with the other American doctors who refused to listen to him about this "crazy eastern/African practice" that had saved his children's lives come across as very similar to certain doctors today. This procedure was developed in the days when the humeral theory was still the gold standard and no one knew what germs were- only that in Africa and Turkey people were doing this procedure and then not dying of smallpox... It's a very good book.
posted by Homo neanderthalensis at 11:22 AM on March 28, 2019 [2 favorites]

I have not read the book, but the Wikipedia entry on Zabdiel Boylston includes the phrase "a lighted hand-grenade was thrown into the room" and the one on Mary Wortley Montagu mentions that she taught herself Latin, eloped, became a travel writer, and was attacked in every piece Alexander Pope published for a decade after she spurned him ...

I'll definitely be looking this one up! Lady Mary is one of my heroes, but I'd never heard of Zabdiel Boylston, so it's a bit like all those science stories you see so much of nowadays where there is an obscure woman scientist who did great things but you've never heard of them, but with a man.

Also, Alexander Pope was a dick, but as my high-school English teacher pointed out he was very short indeed (she pointed to the door-knob and said "he was only this tall") and a Catholic so at a huge disadvantage in that era.
posted by Fuchsoid at 9:30 PM on March 28, 2019 [1 favorite]

Hey! Lady Mary's letters have been in print for the last hundred years or so. They're available on Project Gutenberg, but I recommend getting the 20th century version of her selected letters (in one volume) because the Victorians bowdlerized her.
posted by Hypatia at 8:02 AM on March 29, 2019 [3 favorites] 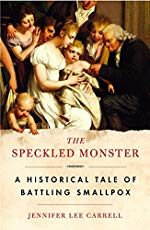