In Oxford's library, American historian and reluctant witch Diana Bishop unwittingly calls up an ancient magical manuscript, and finds herself confronted by geneticist and vampire Matthew Claremont, who is determined to get his hands on the book. (BBC America/AMC US broadcast premiere)


Den of Geek - Will A Discovery of Witches do more than just hit the familiar marks of supernatural fiction? Or will that be enough?

Hollywood Reporter review - Deborah Harkness' best-seller about vampires, witches and academic research into the field of alchemy comes to Sundance Now and Shudder with its interspecies swooning intact.

Rotten Tomatoes reviews
posted by oh yeah! (14 comments total) 2 users marked this as a favorite
My partner and I watched this (it came out last year in the UK), while we weren't blown away we were entertained enough to watch the whole show. My partner is just finishing up the first book, which she recommends, but says that the book is quite different from show. I would have enjoyed more "romance in the stacks" with a heavy focus on ancient alchemical books & book restoration (maybe a less book nerdy & more romantic Club Dumas?) rather than handsome vampires but perhaps I'm not the target audience. Decent performances from the familiar British character actors.
posted by Ashwagandha at 7:21 AM on April 8, 2019 [1 favorite]

It's a series that improves as Diana and Edward reach a more equal footing. I do love it, in a sort of secret guilty pleasure way.
posted by DarlingBri at 8:12 AM on April 8, 2019 [2 favorites]

I watched this first episode out of general genre curiosity (not having read the book), but, none of the characters made much of an impression on me. I may give it another episode to see if it does grow on me, but, I probably won't be posting more threads.
posted by oh yeah! at 6:57 PM on April 8, 2019

I watched the first episode when it was on here last year, but didn't bother with any more. It wasn't especially gripping, to say the least, with nothing in particular I'd not seen before, Afterwards I remembered that I had read the book, but remembered practically nothing about it, except giving it up half-way through.

Ont thing though, it crops up quite often as a trope, but where does the idea come from that being a witch is something you inherit, rather than something you choose to do?

I think it's a variation of the chosen one trope, and a way to answer the question 'if being a witch is so cool, why doesn't everyone do it?'
posted by dinty_moore at 7:31 AM on April 9, 2019 [1 favorite]

I personally think that the show being different in any way could only be an improvement over the source material.
posted by kyrademon at 9:14 AM on April 9, 2019 [4 favorites]

Why can't witches and vampires get along? Is it because witches in this universe are fundamentally different organisms than humans, or is it just that the obvious dangers for a human and vampire being friends make for bad bedfellows.
posted by GoblinHoney at 12:18 PM on April 9, 2019

I personally think that the show being different in any way could only be an improvement over the source material.

Made by Sky - the TV service owned by Rupert Murdoch. Every Sky show I've seen (they did the Pratchett adaptations and Penny Dreadful) has always seemed a bit slow - like they were trying to pad out the material (especially the Pratchett), and a bit too... merely competent? Like when you get a catering company to do the buffet for some kind of event, and all the sandwiches and dips and things look perfectly fine, and taste perfectly fine and they're certainly clean, but you don't for one moment notice the food. Whereas with something like Dr Who (which everyone's been trying to ape since 2005, whether they admit it or not), you're never really sure what you're going to bite into next, but it can taste amazing, and you don't forget it in a hurry either way.

Of course, I don't have Sky, so I've not seen the show. My impression from stumbling across the trailer was that the author had started out with a spreadsheet of supernatural demographics, and worked out that the one combination that hadn't had a hit yet was witches and vampires. That sort of systematic bloodlessness seems to have carried through to the production.
posted by Grangousier at 2:21 AM on April 13, 2019 [1 favorite]

I’m actually really enjoying this. It’s quiet, a bit understated. I’m loving the time in the library and the bits of scholarly life. I like it better than the books to be honest, which had a worse power dynamic between the leads in the beginning.
posted by congen at 6:40 PM on April 23, 2019 [1 favorite]

Jumping in late bc I think this is the only place I'm likely to get a good conversation about it, but:

Watched eps 1-6 on a long flight (Singapore Airlines has it in the seatbacks) yesterday, and was pulled in enough that I bought the last 2 episodes from iTunes to watch once I got home, when I was honestly not fit for anything more complex.

Obviously the whole series carried me through, but it also seemed like a well-produced pastiche of lots of tropes explored better elsewhere.

1. I almost quit it -- while still on the plane! -- when the Diana/Matthew relationship progressed because of how transparently Twilight-y it was. I mean, DarlingBri even misnamed Matthew as "Edward" above, right?

3. Oh, so she finally DOES get to level up and be powerful? Imagine my surprise.

4. So witches have magic, and vampires are kinda stereotypically vampire-y (strong, fast, long-lived), and demons are . . . what, exactly? I suppose it's possible this was established in the first six episodes in a way that Singapore Air decided to edit out, but that seems unlikely, so I'm left wildly irritated that 1/3 of the supernatural creatures have had literally no job in the story so far.

5. I'm getting the strong idea that the writers don't have the supernatural rules settled, and that they're going to riff as they go. The development that gives me this idea is late in the first season, so I won't be more specific.

6. OTOH, I don't think it's spoilery to point this out, but: the first season ends on a cliffhanger, and without resolving any of the threads. I mean, okay, but . . .

I'm kind of shocked that it was on awards season lists in the UK. I mean, do these people not ever watch ANY genre work?

My impression from stumbling across the trailer was that the author had started out with a spreadsheet of supernatural demographics, and worked out that the one combination that hadn't had a hit yet was witches and vampires. That sort of systematic bloodlessness seems to have carried through to the production.

So witches have magic, and vampires are kinda stereotypically vampire-y (strong, fast, long-lived), and demons are . . . what, exactly? I suppose it's possible this was established in the first six episodes in a way that Singapore Air decided to edit out, but that seems unlikely, so I'm left wildly irritated that 1/3 of the supernatural creatures have had literally no job in the story so far.

This has been driving me bananas, but I'm hoping for a dramatic reveal somewhere down the line. I'm curious how this worked in the books, because as far as I can tell, there has been absolutely nothing in the show so far to distinguish demons from normal-ass humans.
posted by showbiz_liz at 1:18 AM on October 19, 2019 [1 favorite]

So I am about halfway through the first book and yes I think there will be more info about demons and their specifics. I saw all 8 episodes (also on a plane) and remember Matthew's friend Hamish saying that demons are treated as third class citizens in one episode. There is another demon character in the later episodes that has or hints at more powers.
posted by soelo at 12:21 PM on October 29, 2019

I started watching this and I'm at about season 1 episode 6. I know this a vampire show and that means grim and sexual but I was a bit surprised by how dark this went. If you see the vampire genera as about sexual desire and the landscape of consent, this show delivers.

The way the story is structured around racism seems haphazard but no more so that than Harry Potter or Star Wars.

I agree with the rules might not be settled. So far several important pieces of information are dropped and the excuse it that Diana has been avoiding magic. Yet she seems to know what a binding spell is in a way that is helpful to the writers.

I also agree that so far demons don't see to have much of a role in the story. I hope they get some air time.

I'm annoyed when Matthew is anywhere and calls out to Diana to see if she is in the room or near by when he has such heightened senses.

Often the flashbacks are clumsy.

I enjoy the locations and the actors. I enjoy the tension. The acting is good if not inspired. I appreciate the lack of comedy. I'm enjoying it.
posted by bdc34 at 11:54 AM on April 25, 2021 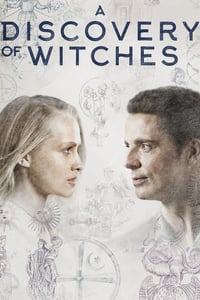