Nineteen-year-old Jake Margate struggles with terminal leukemia for five years and is ready to let go but his mother is not.


She’s found a rogue doctor pursuing radical treatments and takes her son to a remote institute where he does seem to get better. While initially Jake feels better than he has since his diagnosis, there are strange side effect of the treatment like his inability to eat and his odd blackouts.

Jake juggles his first romance with fellow patient Goliath AKA Goth who suffers from cystic fibrosis, the hostility between his divorced parents, the strange side effects of his treatment, and his increasing suspicions of what Dr Harry has actually done to him.
posted by miss-lapin (1 comment total)
This is a quick read. The review in Rue Morgue got me interested. I was expecting something a bit more complex and what I got was a YA novel. Now a YA novel that touches on issues like terminal illness and lgbtq issues is needed, and I totally support it for that. It does credit to how often teens dealing with serious illness end up going through terrible lengths to protect their parents from what is actually happening and that landed with me the most as someone who has done similar things.

Unfortunately for me, I was expecting something a bit more complex from the review I read. So yes the story line is streamlined and predictable even the romance with Goth (oh the pain). The first narrator voice is far too facile, and the author expects too many sins to be forgiven by the fact that it's supposed to be the voice of a teenage boy who has been trapped on his death bed for 5 years. But I do think this book is worth a read. I do wish it had gotten a better editor because I think if Thornton had dug in a bit more there was a really amazing book hidden just a layer beneath it.
posted by miss-lapin at 10:57 PM on April 27, 2019 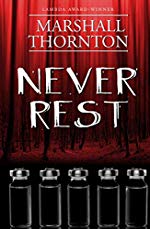