Peter Grant is one of only two members of a very special branch of London's Metropolitan Police. He is, in fact, pretty much a wizard and it's his job to investigate those shadowy crimes that involve urban vampires, weird folk in the underground and, in this case, why cars are suddenly taking on lives of their own and killing innocent folk!
posted by dinty_moore (7 comments total) 1 user marked this as a favorite
For anyone who might have missed it: Rivers of London has officially been optioned by Simon Pegg and Nick Frost's production company. So hey, more possible crossover media.

Unlike the audio version - where Kobna's voice easily became Peter's for me, I'm pretty unwilling to integrate the comics' character designs into my conceptions of the characters. They're not so horrible as to be unreadable, but when I purchased the comics I definitely checked to see if the artist ever changed, and if so when.

It's not bad, exactly, but looked dated - getting to Lee Sullivan's bio in the back ended up explaining a lot, because art reminds me heavily of mid-2000's Marvel - there's some good expressions in there, and the inker does avoid sameface syndrome, but the positioning still feels pretty wooden and the women's figures are pretty typical for fifteen years ago (that's not how wetsuits work, Sullivan). And in general, there's some odd fashion choices on anyone who isn't wearing a suit. The issue is that the comic is only three years old.

Though honestly, some of the datedness might also be the coloring - the constant high contrast bright light source to the left or right actually makes the characters look a lot more similar than they would otherwise - everyone ends up looking like they have cheekbones that can cut glass and ages everyone. It's also a very mid-2000's superhero comics look - back when it seemed like everyone started using photoshop for coloring but few people could use it well yet. And yeah, they really should have used more than two skin tones (one random white person's skin tone, one black person's skin tone) for the entire cast - with the odd exception for a random Estonian woman. On the white people, it would be nice but I don't really care, but on everyone else - colorism is a thing, and skin tone affects character design more than just a black/white binary. Peter is pretty explicit in telling us whether someone is light or dark skinned (Political Tyburn is lighter skinned; Beverley is much darker) - he notices, and he thinks it's important. And it's still pretty standard that the female romantic interest is shown as having lighter skin than her counterpart that it kind of sucks to miss that in the comics depictions

On the not-art front, it's interesting getting some non-Peter POV (I loved Nightingale and Sahra talking to Toby), but I still missed his voice and sense of humor. There were still a couple of good lines in there, but it wasn't really the same. The story worked well enough, though the 1929 storyline could have been better integrated. I also don't know if DC Carey is more prominent in here or if it's harder to gloss over him when he has a body, but he does seem to have a more defined presence in the comics.
posted by dinty_moore at 9:40 AM on April 30, 2019 [1 favorite]

The comics have the same problems as the short stories — they are very slight, since Aaronovitch can’t assume everyone will read them — and, as a result, they kind of don’t matter? As d_m points out, there are some nice character moments, but they feel a little arch and cozy, like the characters are playing themselves and providing “fan favorite moments.”

There’s an elongated quality to the art that I find a little off-putting, and definitely yes to the sameness of the faces. There’s a scene with Lesley in an upcoming series where she takes her mask off and she’s “pretty comics face with... a rash? A bad sunburn?” And I was outraged, because, if her friends were recoiling from that... well, she needs better friends. [I don’t think that’s a spoiler.]

The mystery unspools at a reasonable pace, so it’s not all grumbling. I’ll skim it when I get home and see if I have anything more coherent to say.
posted by GenjiandProust at 4:18 AM on May 1, 2019

Yeah, it's interesting to me that the general reaction in reviews to anything that's referenced but not explicitly on the page is that it's probably covered more in the comics - and that seems to be true about half of the time? Some of these questions are things that Peter doesn't know about (what Abigail is up to, for example). And then there's DC Carey being considered a 'comics character', when he's been in the books since MoS, I think - it's just until Lies Sleeping he never had much to do besides be a font of laziness and microaggressions (which is fine! I am not exactly clamoring for more Carey content or backstory).

I don't particularly mind the comics acting as filler episodes, though - it's nice that they're at least considered as officially canon, and the last few books could have used more filler/downtime scenes.

It's weird, Sullivan's character designs can have different torsos (which, hey, credit where credit is due - there's a couple of different body types - Stephanopolous and Guleed don't look alike), but everyone has the same long CLAMP-like legs. I spent way too long yesterday trying to figure out what was going on with Stephanoplous's knee-length blazer (is that actually a topcoat that she's constantly wearing while indoors? A longer suitjacket style and she just has very short femurs? Did she, in the tradition of many other short fat butch folks who need to look reasonably nice, spend a lot of money at an online retailer that has since gone under and this was a style they were pushing?) before figuring that it was probably the way to disguise that her legs don't really match her torso. Either that or she was originally drawn in a skirt and this was a quick fix.

For Lesley's face, I just imagined that Francisco Francavilla was drawing it for the correct effect.
posted by dinty_moore at 7:39 PM on May 1, 2019 [1 favorite]

Just finished a quick re-read. It is an OK, if slight, mystery. The real problem is the art. Sullivan clearly has trouble drawing people in real clothes, and his faces are decent in profile but weirdly smirking or astounded in 3/4 or face-on. And his poses are just… Weird. Also his choice of outfits. My explanation for that jacket of Stephanopoulos’ is that she is, for some reason, cosplaying a Victorian banker.
posted by GenjiandProust at 4:06 PM on May 2, 2019 [2 favorites]

Not having read the comics or, honestly, having known they existed until I saw them mentioned in previous threads: is this story "the thing with the haunted BMWs" that gets referenced by a couple of characters (Guleed and maybe someone else?) in the novels?

I'd convinced myself it was like the Noodle Incident in Calvin and Hobbes: a few dark mentions, but the scale and details left to our imaginations.
posted by metaBugs at 6:32 AM on May 3, 2019

Not having read the comics or, honestly, having known they existed until I saw them mentioned in previous threads: is this story "the thing with the haunted BMWs" that gets referenced by a couple of characters (Guleed and maybe someone else?) in the novels?

Yep! And to be honest, that's all you really need to know about it - whatever you're imagining is probably just as good, if not better. Of the comics that seem to affect what's going on in the books, I'd probably choose Night Witch (Varvara focused) and maybe Cry Fox (Abigail focused). I think Detective Stories is the best of the lot, though as a warning - it's still Sullivan/Guerrero on art, not whoever did the cover.

(the Kew Gardens thing is, as far as I can tell, a noodle incident)

One last thing on the fashion choices - part of what drives me nuts about the weird fashion is that Peter's narration has always noticed what everyone was wearing, down to the shoes and how much they cost. He cares about style and looking good - more than Beverley does, which is one of those bits of characterization that I find really endearing about them as a couple. It's kind of like the binary skin tones - by having art that doesn't care about fashion, it's losing that piece of characterization that's part of the novels. Contrast that to how the cars are treated in the art - each car is drawn with loving care and is recognizable for what it is and what it signifies. Peter cares a lot about cars and would notice those details, and if you had interchangeable boxes with four wheels, the story would be missing something. I'm not even needing like Wada/Anka levels of fashion love, just choose a retailer or a pinterest board for a character and draw some clothes that actually exist.
posted by dinty_moore at 7:45 AM on May 3, 2019 [2 favorites] 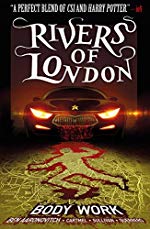