Where's your next disease coming from? From anywhere in the world--from overflowing sewage in Cairo, from a war zone in Rwanda, from an energy-efficient office building in California, from a pig farm in China or North Carolina. "Preparedness demands understanding," writes Pulitzer-winning journalist Laurie Garrett, and in this precursor to Betrayal of Trust: The Collapse of Global Public Health, she shows a clear understanding of the patterns lying beneath the new diseases in the headlines (AIDS, Lyme) and the old ones resurgent (tuberculosis, cholera). As the human population explodes, ecologies collapse and simplify, and disease organisms move into the gaps. As globalization continues, diseases can move from one country to another as fast as an airplane can fly.
posted by Homo neanderthalensis (3 comments total)
This book was published in 1995- and as such some of the information is slightly outdated. But! Quite a bit is still relevant, and an astonishing look at some of the biggest global outbreaks at the time of publication. The sequel is also good and will get it's own post. In a lot of ways Garrett is quite prescient, and over 20 years later you can see how much of what she predicted came to pass, and how we are all still quite vulnerable to the coming plague. Word of warning- book is long.
posted by Homo neanderthalensis at 6:40 PM on May 6, 2019 [3 favorites]

I read this... Around 1999 or 2000? Obviously too long ago to remember specifics, but I do recall it made an impact on me and was the first time I thought about overuse of antibiotics and how our approach to diseases is haphazard.

After reading this I was convinced for a while we were/are due for a rampant outbreak of some kind, which hasn't happened yet but I'm not sure if that's luck or the book was too pessimistic. I suspect luck.
posted by jzb at 12:50 AM on May 9, 2019 [2 favorites]

After reading this I was convinced for a while we were/are due for a rampant outbreak of some kind, which hasn't happened yet but I'm not sure if that's luck or the book was too pessimistic. I suspect luck. 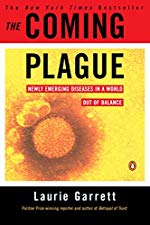