A cavalry officer posted on the Rio Grande must deal with murderous raiding Apaches, his son who's a risk-taking recruit and his wife from whom he has been separated for many years.


Jeffrey M. Anderson: In exchange for the funds to make his dream project The Quiet Man (1952), director John Ford agreed to make this low-budget Cavalry Western for Republic Studios. But it's far from a throwaway; it became the third part of Ford's "Cavalry Trilogy" and it's every bit as good as the other two, Fort Apache (1948) and She Wore a Yellow Ribbon (1949). In fact, I like it better than the problematic Fort Apache; it's far simpler and more effective.

Dennis Schwartz: Rio Grande was the last of the 7th Cavalry trilogy after the 1948 "Fort Apache" and the 1949 "She Wore a Yellow Ribbon." A minor but enjoyable John Ford and John Wayne collaboration, that grieves for the past, offers fine characters in supporting roles (especially Victor McLaglen as the oafish master sergeant) and many of the usual quirky Ford cinematic moments. Writer James Kevin McGuinness based it on the Saturday Evening Post story Mission With No Record by James Warner Bellah. It's richly absorbed in the whimsical aftermath of the Civil War and captures a feel for the rugged life on a frontier fort. It's also overloaded with corn, especially from the songs of the regimental singers called the Sons of the Pioneers

Aurora: While watching RIO GRANDE again in preparation for this post I’d tweeted that one of the wonders of Ford for me is how in the midst of all the testosterone in his films you also get the kind of tender moments that could make a young girl blush. That moment and sentiment in RIO GRANDE happens as the Sons of the Pioneers serenade Kathleen Yorke (O’Hara) with the beautiful ballad “I’ll Take You Home Again, Kathleen” during her first night at the post where she’s reunited with her estranged husband, Lt. Col. Kirby Yorke (Wayne). This scene never fails to make me misty as she hopes the serenade and song were Kirby’s idea, but the commander is embarrassed by the choice of song and apologizes. Kathleen replies – holding back tears – that she wished it had been his idea. This is a beautiful scene during which the wonderful Wayne/O’Hara chemistry is evident in this their first of five films together. In fact, their chemistry in RIO GRANDE is possibly the best of all their pairings and I don’t say that lightly given how much I love them together in all their collaborations. All of their scenes together in this movie are touching with the palpable sexual energy of a couple that’s deeply in love, but have a huge rift between them.

I was surprised I didn't like this as much as I expected to. Generally I appreciate John Wayne's movies, and here while I really loved his and Maureen O'Hara's acting, the total minimization of the natives along with the fucking ridiculous murdrer subplot of oh he looks like a good kid so it's ok. Combined with some unexpected Southern sympathy (including the damn US army playing fucking Dixie at the end) it wasn't great.
posted by Carillon at 11:50 PM on May 26, 2019 [1 favorite]

I agree with Aurora, I would put the Wayne/O'Hara pairing in this movie above even The Quiet Man.

That's actually in order of their being made. Maybe early on they still had that spark/tension that would later mellow out as their great friendship went on.
posted by Fukiyama at 5:15 PM on May 27, 2019

I've read that John Wayne deliberately played older than his actual age and as a result, he had like a 20 year run where he always seemed the same age. Character actors might play about with age but if leading men do it, it's only for a few scenes that bookend a movie. Or maybe it's just an artifact of b/w movies from 75 years ago when everyone dressed more formally and spoke with an RP accent. John Wayne did neither of those but he grayed his hair for She Wore A Yellow Ribbon and played a soldier about to retire. He was 42. Actors who are around that age today are Bradley Cooper, Tobey Maguire, Zach Braff.
posted by TWinbrook8 at 6:54 AM on May 28, 2019 [2 favorites] 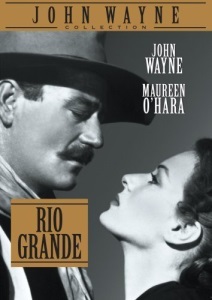