Shuos Jedao is awake.... and nothing is as he remembers. In his mind he’s a teenager, a cadet—a nobody. But he finds himself in the body of an old man, a general controlling the elite forces of the hexarchate, and the most feared—and reviled—man in the galaxy. Hexarch Nirai Kujen orders Jedao to reconquer the fractured hexarchate on his behalf even though Jedao has no memory of ever being a soldier, let alone a general. Surely a knack for video games doesn't qualify you to take charge of an army? Soon Jedao learns the situation is even worse. The Kel soldiers under his command may be compelled to obey him, but they hate him thanks to a massacre he can't remember committing. Kujen's friendliness can't hide the fact that he's a tyrant. And what's worse, Jedao and Kujen are being hunted by an enemy who knows more about Jedao and his crimes than he does himself..
posted by dinty_moore (4 comments total) 1 user marked this as a favorite
This book irritated me because all I really wanted from it was for Cheris to come back as a point of view character and I heard she did in this one so I bought it and that proved to be the case for a grand total of one-and-a-half chapters.
posted by kyrademon at 9:41 AM on July 15, 2019 [2 favorites]

I actually thought book 2 was the best in the series, but I enjoyed this one too. I loved getting to see more of Brezan and his complicated relationship with his family and being Kel. Kujen is complex and creepy. The concept of Jedao waking up with his 17-year-old mind in a 40-year-old body was interesting, and I liked watching him develop his morals, but I kind of wish Yoon Ha Lee hadn't brought him back. Clearly he's the author's favorite character, but now that you mention it I want more Cheris too!
posted by j.r at 10:55 AM on July 15, 2019

I loved Ninefox Gambit on a conceptional level (I'll probably make a post for other books in the series once I'm done posting for the hugos), was really worried about remembering the details for Raven Strategem but didn't have any issues, and then had the same worry here. I missed Cheris a lot, and I do get the idea that Yoon Ha Lee likes Jedao more than I like Jedao, but as far as antiheroic protagonists go, he's better than most. And mini-Jedao was interesting. 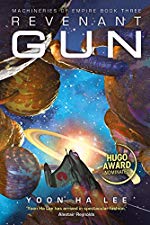