Set in the futuristic landscape of Los Angeles on July 4, 2008, as it stands on the brink of social, economic and environmental disaster. Boxer Santaros (Dwayne "The Rock" Johnson) is an action star who's stricken with amnesia. His life intertwines with Krysta Now (Sarah Michelle Gellar), an adult film star developing her own reality television project, and Ronald Taverner (Sean William Scott), a Hermosa Beach police officer who holds the key to a vast conspiracy. Written and directed by Richard Kelly (Donnie Darko).
posted by DirtyOldTown (5 comments total) 1 user marked this as a favorite
Saw this once maybe five years ago. A glorious disaster of a movie. The weirdest thing for me was that the non-comedians were hilarious but the actual comedians were really not funny at all. The Timberlake musical number is amazing.
posted by acidnova at 12:10 PM on July 16, 2019 [2 favorites]

Oh man, I haven't watched this since maybe 2008 or so, and found it to be nonsensical and weirdly violent, but I could imagine that time might make it more interesting to rewatch (this is what the Bush era was like, kids).
posted by dinty_moore at 12:12 PM on July 16, 2019 [1 favorite]

I liked this movie. I can hardly tell you anything about it, but I turned off the tv and thought, "Well, that was better than what I was lead to believe."

I love this incomprehensible bloody mess of a movie.
Several years ago, I let a stoner kid at work borrow my dvd of it, and about a week after he returned it, he asked to borrow it again.
That echoes my experience of it, in the sense of, “What did I just watch? Wait, I need to watch that again. Okay, this thing is fucked up enough I need someone else to share in the confusion.”
posted by Mister Moofoo at 7:12 PM on July 20, 2019

Ahead of the Blu-Ray release (which will include the infamous Cannes cut!), AV Club has released an oral history of Southland Tales.
posted by Johnny Assay at 12:29 PM on January 28, 2021 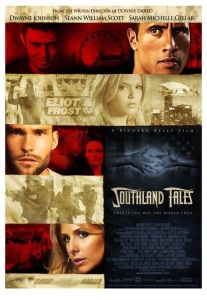