17 year old Australian Che Taylor just got relocated to NYC (by way of Asia) by his hippie pacifist parents. He’s a boxer that isn’t allowed to spar, a 17-year old boy desperately in need of a girlfriend, and he’d really rather be back home in Sydney. But all of that pares in comparison to his real problem. He is pretty sure his 10 year old sister Rosa is a psychopath that will kill somebody sooner rather than later. The parents are totally disconnected, or so he thinks, so he takes it on himself to try to protect the world from his sister, while at the same time trying to lead a normal 17-year old’s life. That is the set up for the totally engrossing novel. It’s a suspenseful, downright creepy psychological thriller that manages to address the nature of psychopathic behavior (nature vs. nurture), parenting, teenage relationships, religion, gender identity, and class differences, all within the framework of a totally entertaining novel that will keep you up late trying to finish the book.
posted by COD (1 comment total)
Ooooh I loved Liar and want to read this badly.
posted by infinitewindow at 9:19 PM on August 29, 2019 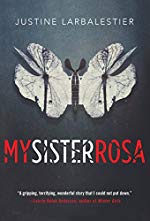