An antiterrorism agent goes under the knife to acquire the likeness of a terrorist and gather details about a bombing plot. When the terrorist escapes custody, he undergoes surgery to look like the agent so he can get close to the agent's family.

You see what thickets this plot constructs; it's as if Travolta adds the spin courtesy of Cage's personality, while Cage mellows in the direction of Travolta. Better to conclude that the two actors, working together, have devised a very entertaining way of being each other while being themselves.

A good director would choose the best of the six ways and put it in his movie. Woo puts all six in. If you keep your eyes closed during a Woo movie and open them every six minutes, you'll see everything you need to know to have a perfectly lovely evening at the cinema.

In one infamous scene, Sean Archer (with Castor Troy’s face) tells an associate that he wants to remove Archer’s (Troy’s) face: “I’d like to take his face…off.” Not content with namechecking the film just the once, the pair then go back and forth with variations on that sentence for literally a minute. In the script the line was never repeated; Kyris claims that Cage delivered it 18 or 20 times for no real reason, changing the intonation and movement each time, to the point of hysteria. As Werb says, “It was at that point we were worried Paramount was going to change the name of the film.”

I just want to share the moment that I was a teenager, sitting next to my dad in a theater, and had to hear Cage's delivery of "I could eat a peach for hours." I died that day and am a ghost.
posted by Countess Elena at 6:50 PM on September 2, 2019 [15 favorites]

Earlier this summer I was lucky enough to see a play based on Face/Off, in iambic pentameter and set in Roman times, chronicling the epic battle of Cagio and Travoltus. It was quite incredible, maybe my theater highlight of the year. John Woo is a character in it and addresses the audience before each act a bit like Puck, and there are numerous times when they drop in ridiculous dialogue from the film verbatim.

This movie is absolutely ridiculous and I love it because it that.

Am a fan of John Woo's 80's HK stuff, was an enthusiast with Woo's Hollywood foray at the time (I was in college in the US, from Canada, HKer) but now generally indifferent.

Best pairing of big name leads since 'Tango and Cash' with Stallone playing out of type and Russell playing all in type.

It's already confusing enough, but I think that it would have been artistically better if Cage and Travolta had switched roles; Travolta as the bad guy with Cage inside, and Cage having fun pretending to be a G-man. Cage would have done marvellously in either, but yeah, Travolta was the limiting factor and that's probably why they went the way they did.

Harder to imagine Travolta playing a good guy pretending to be a bad guy.

The "I can eat a peach for hours" that was directed at the FBI agent - I have a feeling that she's familiar, but I can't figure out who played that part.
posted by porpoise at 1:48 AM on September 3, 2019 [2 favorites]

Ok, so apparently she was Lauren Sinclair playing 'Agent Winters.' I was maybe thinking Carla Guigino but obviously that's not her.

Sinclair was in 'Wing Commander: Prophecy' (video game FMV segment/ interlude) so maybe that's where my synapses got crossed.
posted by porpoise at 1:56 AM on September 3, 2019

Only tangentially related to Face Off. When Face Off was on the circuit here, we went to a showing of Cold Comfort Farm at a film festival. The person introducing the film gave a truly memorable talk. First, with no explanation other than "I just saw this other movie" and no attempt to link the films, she gave a thorough synopsis of Face Off. When she was done with that, the audience of mostly pensioners were getting restless, but remained politely quiet. But when she started on a thorough synopsis of the film we were about to see (Cold Comfort Farm ) they started rumbling like a pot coming to boil, and soon there were cries of protest. The speaker was cut off mid sentence and unceremoniously removed from the stage. It was a bizarre experience.
posted by Zumbador at 5:18 AM on September 3, 2019 [5 favorites]

I never understood why it's "Face/Off" rather than "Face Off" or "Face-Off" or "Faceoff" or anything. I always read it as two potential titles for the movie, Face, or alternately, Off. I think Face is the better title here.
posted by skewed at 7:51 AM on September 3, 2019 [3 favorites]

This film is the hottest of garbage but I smile every time I think of the premise. I have no idea what went on behind the scenes but it has always giving me a kick to imagine Cage and Travolta as hating each other and deliberately trying to sabotage each other with ridiculous acting tics that the other would have to imitate.
posted by AndrewStephens at 7:53 AM on September 3, 2019

I just want to share the moment that I was a teenager, sitting next to my dad in a theater, and had to hear Cage's delivery of "I could eat a peach for hours." I died that day and am a ghost.

Anyway, I love this dumb movie. It's easily one of the best dumb movies ever made. But my favourite thing about it is actually the scene in 30 Rock where Liz Lemon talks about finally "getting" the title. "Face off *makes a gesture like two fists punching each other*, face... off *imitates Cage's "I'd like to take his face off" gesture*"
posted by tobascodagama at 8:37 AM on September 3, 2019 [1 favorite]

this movie is a cinematic masterpiece and i will not be taking questions at this time
posted by poffin boffin at 10:40 AM on September 3, 2019 [13 favorites]

whir, I was at that show as well! It was fantastic, and I agree that 'John Woo' was a particular highlight.
"Problematic? Sure. But that was the 90's baby!"

I think they're both semi-imitating each other when they're themselves so that their imitations of each other are more convincing when they're switched.
posted by rhizome at 11:23 AM on September 3, 2019 [1 favorite]

It is so incredibly stupid on so many levels, and when it comes on I just can not turn it off.
posted by sammyo at 7:38 PM on September 3, 2019 [2 favorites]

my mom showed me this last year and i was having a grand old time but then the church scene at the end knocked my whole socks off. absolutely magnificent. i made all my friends listen to me talk about face/off for weeks
posted by gaybobbie at 8:34 PM on September 3, 2019

Face/Off is hilarious, but I wanted to call this out in particular:

Earlier this summer I was lucky enough to see a play based on Face/Off, in iambic pentameter and set in Roman times, chronicling the epic battle of Cagio and Travoltus.

Yeah, the play was surprisingly undercovered on the web, although it did pop up on the AV Club which is how I heard about it. This brief twitter video gives the flavor of it, though the dialog is hard to hear.

Other highlights from the play: they made a point of calling this the 51st annual production of Cage in the Park (as Shakespeare in the Park has just celebrated its 50th anniversary). Down the hill from where it took place in Prospect Park a full-on quinceañera was going on, and the director told us that he had hired a mariachi band to set up down there and play at random during the play, whenever the mood took them.

In other Face/Off news: Paramount's remaking Face/Off, as if it can improve upon perfection
posted by whir at 7:29 AM on September 10, 2019

I think that this is another one that I'll have to rewatch. Of course it's preposterous, and no less preposterous for having been set in the future originally, because it's 22 years later and it's no more contemporaneous than robot butlers and air cars. But it's still a hoot; Cage seemed to mostly dial it back a bit, but Travolta has a lot of fun, as in this scene. (Bonus points for beating up Danny Masterson.)
posted by Halloween Jack at 2:20 PM on September 11, 2019 [1 favorite] 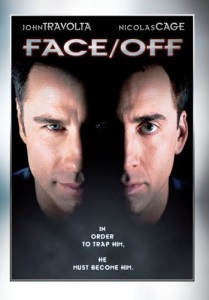