Force Majeure is a 2014 internationally co-produced comedy-drama film directed by Ruben Östlund. It follows the marital tension resulting from an avalanche during which the husband, named Tomas, prioritizes his own escape over the safety of his family.


A Swedish family consisting of a businessman named Tomas, his Norwegian wife Ebba, their young daughter Vera and preschooler Harry stays at a luxury resort in the French Alps. On their second day, they see a controlled avalanche as they are having lunch outdoors on the deck of a restaurant. The powder cloud of the avalanche gives the appearance that the snow is rising and will wipe out everyone on the deck. Tomas, who is filming the avalanche on his mobile phone, panics and runs as the deck quickly empties of patrons, leaving Ebba with their children encased in a dense fog. Patrons return to their tables as the fog dissipates, and no one is hurt.

Julie Crawford: What follows is a painfully realistic examination of conscience by Tomas, emasculated by the realization that he ran, and a reckoning by Ebba, who ponders the need for a husband who can't be counted on when it matters.

Acting is uniformly great, the players conveying as much of their struggles using body language as with words, while Ostlund's white-out scenery is both majestic and alienating. You can't help but leave Force Majeure questioning your own familial usefulness, and chilled by the possible outcomes.

Peter Bradshaw: The Alps themselves are sinister in their forbidding, implacable vastness and so, somehow, is the activity of skiing – an ecstatic, solitary pleasure and an escape from the boring cares and responsibilities of family life. Östlund is clearly a sharp-eyed connoisseur of all this. (He began his directing career in the 90s making skiing films called Addicted and Free Radicals.) Using mostly fixed camera positions, he will intersperse scenes with establishing shots of the clanking, pitiless machinery of the ski lift, rattling rhythmically as bits of cable and metal thunk into each other. It’s the kind of machinery in which you might sever your leg or from which you might fall and kill yourself. Then there are the pipes, like mysterious weapons of war, from which great big bangs are discharged to make the snow shift. We get weird, almost extraterrestrial, scenes at night that show a rich kid flying his drone about the place; this supplies a coup de cinéma that will get the audience jumping out of their seats.

Force majeure is a legal concept that allows you to get out of a contractual obligation: an act of God that means you can’t be sued. Even the intimate assumptions of family life constitute a tacit contract liable to be nullified in a crisis. Safety and comfort are concepts civilised societies have invented to protect themselves from self-knowledge, not physical harm, and perhaps even our most basic conventions are no more than a rickety rope-bridge, or clanking ski-lift. If we glance down at the abyss below, we are lost.

Moira Macdonald: The rest of the movie — which is to say, most of it — deals with the aftermath of this event; how the dynamic between Tomas and Ebba changes, quietly but definitively, as the children warily look on. Writer/director Ruben Östlund lets things unfold slowly; his camera watches as Tomas and Ebba tell the story to friends, and lingers on the snow — sparkling like diamond sand — and the mountains, which now seem to have their own life, ominously vibrating. (Marriage, here, is like that mountain after an avalanche; left disturbed by unexpected forces.) Ultimately, “Force Majeure” becomes a thoughtful examination, through Tomas and Ebba, of the person who lives inside each of us, emerging only in the most unguarded moments — and not always a person we want to acknowledge. The truth is, notes a character, “when you are afraid to die and reality is staring at us in the face, very few of us are heroic.”

Trailer
posted by Carillon (5 comments total) 2 users marked this as a favorite
I saw this in the theater when it came out. Really enjoyed it. Seeing Tormund Giantsbane in another context was fun, and it was actually before he was a major player on GoT, so it was almost more of recognizing him on GoT as the guy from Force Majeure.
posted by OHenryPacey at 11:00 AM on October 3, 2019 [1 favorite]

I really liked this movie. Though I saw it about the same time as The Loneliest Planet and so I was super set for the "moment of cowardice reverberates through a relationship" genre.

IIRC in both movies what's notable is that there is no attempt to really talk through the situation. There is no language for it, things just keep rolling on. It's pretty realistic in my experience anyway, where basically no one is self-possessed enough to be able to confront such a huge thing directly. I guess I can imagine Woody Allen and Diane Keaton characters (not that I particularly want to) talking all around it all over the place without getting any faster to the realization that it really does mean things are broken.
posted by fleacircus at 7:47 AM on October 4, 2019

I watched this earlier this year on a bit of a lark and also enjoyed it very much. From Östlund, I'd only otherwise seen The Square (IMDB | Letterboxd), which aside from That Scene (which did admittedly send me on a mission to bring as much Terry Notary into my life as possible), I found entirely lacking and not at all worthy of the Cannes adulation bestowed upon it. Force Majeure was great though: it has a really exhilarating way of employing both comedic and dramatic tension that held my attention really tight.

fleacircus, I like your observation: my favorite type of movie is probably "overly verbose, somewhat doleful relationship conversation for two hours" and this is an interesting inversion, one in which we see what happens without the talking.

Great camerawork, too; I love the way it inures a rooted feeling of beholding. The avalanche scene still sticks with me. Thanks for posting this--a good reminder to loop back and watch some of the director's other work. Suggestions welcome!
posted by youarenothere at 8:42 AM on October 4, 2019

I liked this movie as well, definitely struck by the stillness and the camera work. The actors I think did a great job of showing their internal life without over doing it.
posted by Carillon at 10:19 AM on October 4, 2019

I really liked this movie. Excellent acting and editing.
posted by biscotti at 2:26 PM on October 5, 2019 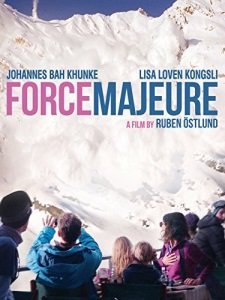