The Pope family is on the run from the Feds. Consisting of the father Arthur, the mother Annie, older son Danny, and younger son Harry, they leave where they had been in hiding at the start of the movie and set up house in a new community where they face more than just staying one step ahead of their pursuers.


Sidney Lumet directs the story of Arthur (Judd Hirsch) and Annie (Christine Lahti), Sixties radicals who bombed the weapons lab that developed Napalm. No one was supposed to be there, but a janitor caught in the blast was left blind and paralyzed. The couple went underground with their son Danny (River Phoenix). Years later, having had another son Harry in the meantime, the family maintains a fortress mentality as they are forced to move from place to place to stay ahead of federal authorities.

After running from their last home at the start of the movie, they are able to set up at a safe house under new identities, finding jobs and enrolling at the local schools using methods they've long practiced. But Danny, who is a senior in high school, faces questions about his own life and identity after he is encouraged to go to Juilliard in New York City by his music teacher and he falls in love with the teacher's daughter. Arthur and Annie are forced to confront how much longer they can continue to stay on the run as their children approach adulthood.

What the critics thought, via Wikipedia:
Film critic Roger Ebert gave the film four out of four stars and called it "one of the best films of the year."[6] In her review for The New York Times, Janet Maslin wrote, "The courtship between Danny and Lorna is staged especially disarmingly, with Mr. Phoenix and Miss Plimpton conveying a sweet, serious and believably gradual attraction."[7] Newsweek magazine's David Ansen wrote, "A curious mix of soap opera and social history, Lumet's film shouldn't work, yet its fusion of oddly matched parts proves emotionally overpowering. You have to be pretty tough to resist it."[8]
posted by Fukiyama (2 comments total) 2 users marked this as a favorite
I saw this movie a long time ago on cable (surprise, surprise!). I am pretty sure I came into it already in progress, sometime around the point where Christine Lahti's character meets her father played by Steven Hill (my first exposure to him). That is a pretty intense scene.

The movie is well done all around. It does a great job of world building, fleshing out the world the Popes left behind, the one they move through as they hide underground with its network of contacts and helpers, and the normal world they move through day to day using their fake identities. River Phoenix's talents cannot be understated. So too with his character's love interest Lorna played by Martha Plimpton. Those two represent some of the best of their generation and the fact they didn't go on to great careers as adult actors is sad.

Judd and Christine as the parents are great. Their character not only have to deal with Danny growing up, but also the arrival of one of their old friends from times past, who wants them to help in continuing the struggle, which ties back into the questions surrounding their children.

I watched this movie so many times in hs. Thank you for reminding me so I can revisit it.
posted by miss-lapin at 8:23 AM on October 5, 2019 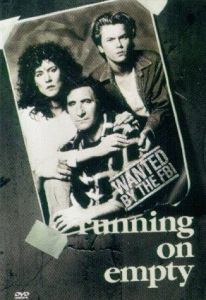