This week the remaining queens are split into two teams for a girl group battle.


With the help of Grammy nominated singer and producer MNEK, the two newly formed girl groups record vocals and perform their own versions of the same song. Can they impress Mama Ru and guest judge and girl group professional, Jade Thirlwall?

The mini challenge at the start of the episode was a trip to library as Reading is FUNDAMENTAL! Crystal won the mini challenge and chose Cheryl and The Vivienne as part of Filth Harmony while the remaining queens formed The Frock Destroyers. With the help of Grammy-nominated singer and producer MNEK, the two newly formed girl groups record vocals and perform their own versions of the song "Break Up (Bye Bye)".

On the main stage, the runway theme is "Day at the Races". After the runway, The Frock Destroyers were the winners of the challenge, with all three members winning the maxi-challenge for the first time in Drag Race Herstory. Cheryl is commended by Ru for her performance in the challenge but is critiqued by Michelle for her runway look. Cheryl is ultimately declared safe, leaving The Vivienne and Crystal in the bottom two. After they lipsync to "Power" by Little Mix, The Vivienne was declared the winner, and Crystal, having landed in the bottom two for the second time, was eliminated from the competition.

Wow, was Davina ever basically Detox x Alaska in the performance. Just something about her reminded me of those two.

I thought that Baga did great and that she was funny. It was smart to call back to her memorable moments in her lyrics, as the show (and fans) always seem to love that.

I found that this episode was edited a little heavy-handedly so it seemed like the Filth Harmony group were bad. I thought they were actually reasonably good, just not as good as the other group.

I guess the lip sync taught me that I was cheering for The Vivienne over Crystal because that's who my heart told me I wanted to win it. Viv is kind of reminding me of Roxxxy Andrews.
posted by urbanlenny at 4:16 PM on November 5, 2019 [2 favorites]

I bought the Frock Destroyers version of the song.

Davina, Vivienne and Baga are the clear top three and I can't say I have a problem with that. As of now, I'm cheering for Davina to take the crown.
posted by Julnyes at 9:19 AM on November 11, 2019 [2 favorites] 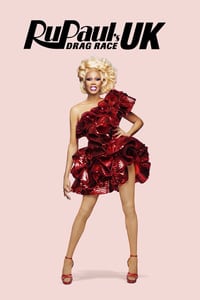