According to rumor, this could have starred Travolta and Sigourney Weaver or Dudley Moore and Anjelica Houston and many other interesting combos.

More trivia: ‎The angry customer who is screaming to Allen about his cherries is director Ron Howard's real-life father, Rance.

When Madison watches television at the department store, the little boy in the toothpaste commercial is Emmanuel Lewis (see imdb.com).‎

Mistakes to look out for:
‎When Madison enters Bloomingdale's, you can see the reflection of Ron Howard in one of the mirrors.‎
‎
After Madison dives into the sea after meeting Allen for the first time, she swims off in a t-shirt. She was naked before she got in the water.

‎When Madison walks towards the people after she transforms, she is visibly wearing a pair of jeans. She should be naked.‎
posted by Ik ben afgesneden (2 comments total) 1 user marked this as a favorite
The movie responsible for the scourge of the name "Madison."
posted by Chrysostom at 7:20 AM on November 25, 2014

Holy crap, it IS. From the wiki page on the name:

The rise in popularity is due to the 1984 movie Splash, where Daryl Hannah plays a mermaid who adopts the name "Madison" in her human form after seeing a street sign for Madison Avenue. When she makes this selection, Tom Hanks's character initially protests: "But Madison isn't a name!"
posted by troika at 9:32 AM on November 25, 2014 [1 favorite] 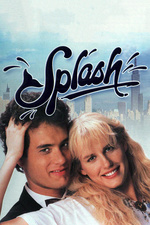