Based on the graphic novels by Mike Mignola, Hellboy, caught between the worlds of the supernatural and human, battles an ancient sorceress bent on revenge. Helboy is dispatched to England by his father to aid an ancient secret society battle an infestation of giants, but things are not as they seem, and he must confront his own duality, facing a critical choice in his life path.

The most recent adaptation of Mignola’s comic stars Stranger Things’ David Harbour in the title role, with a supporting cast including Ian McShane as Hellboy’s adoptive father and Milla Jovovich as the Queen of Blood.

The film is something of an origin story for the eponymous demon and, in my opinion, takes a closer look at Hellboy’s psychology as an adoptee than the Del Toro films did. Jovovich’s role playfully inverts the gender of the Osiran myth, in that her character begins the film in a state of ancient dismemberment, her pieces scattered the length and breadth of England.

The film is gorier than its’ predecessors and reminded me in parts of Ray Harryhausen films. It was released to negative critical reaction and appears to have lost money. I enjoyed it.
posted by mwhybark (14 comments total)
Yeah, I thought this wasn't nearly as bad as it was made out to be. I thought the earlier Hellboy movies felt like superhero movies, albeit with Monster Squad superheroes. This movie felt like a MONSTER MOVIE, and I liked it for that. And I liked that they didn't try to make Milla look like a supermodel in every scene; I was particularly struck by the look of the scene where she's sitting on a dirty-looking couch, watching TV in the dark and waiting for somebody to bring back her leg or whatever.

But I thought they didn't really get hold of what's great about the Mignola comics, and the earlier movies didn't either, so it's difficult to feel that this was a really NECESSARY movie. It felt like they ripped a bunch of pages out of the comics, shuffled them randomly, and used that for the screenplay. I will never understand why movies like this struggle with story so much when the stories are there. IT'S WRITTEN ALREADY, for fuck's sake.

One thing I didn't like was the way they kept cutting to unrelated scenes of the world being destroyed--people coming out of a bank or Starbuck's, seeing somebody's CGI FX reel, screaming and running, and getting stepped on by whichever Giant Horror from the FX reel. They were trying to raise the stakes, but none of those scenes felt connected to anything that was happening in the rest of the movie.

I also thought they shot themselves in the foot by picking the dumbest scenes in the whole movie for the trailer. The bit where Hellboy gets shot at by a nervous cop, and turns around and yells "I'm on your side!" or whatever, seemed PARTICULARLY off in just about every way to me...
posted by Sing Or Swim at 9:17 AM on January 15, 2020 [4 favorites]

Hellboy is currently available to watch and stream via HBO in the US.
posted by Etrigan at 9:31 AM on January 15, 2020

Dammit, I broke my sacred rule of writing capsules and did NOT use the phrase “coming-of-age story”. It was a straight gimme, too! Oh well, next time.

(Many years ago I had a gig that including writing two-sentence preview capsules for a season’s upcoming films in a campus-town film series. I would amuse myself by attempting to use the phrase, with accuracy, in each capsule, before editing it out. It was sort of like writing poetry, or writing for the old version of Twitter, and I can pretty much still do it today. This is in part because commercial cinema often embraces a major juncture in a protagonist’s life arc, and such events can often be described as ‘coming of age’.)
posted by mwhybark at 9:41 AM on January 15, 2020 [1 favorite]

By some odd coincidence, this movie is the Pacific Rim 2 of the Hellboy franchise.
posted by Brocktoon at 6:20 AM on January 16, 2020 [2 favorites]

Overall this one felt profoundly unnecessary, and didn't really land any of the tones it was going for (humor, interesting action, actual horror) in my opinion. We did get a fairly non-canonical but still excellent Lobster Johnson appearance tho! At the end with the 'hell on earth' sequence there were some beasties that looked like dead-on Wayne Barlowe designs. Interestingly enough, I couldn't find any evidence of him actually being involved in this film - he has worked with del Toro in the past and contributed creature work to the prior Hellboy films, but doesn't appear directly associated with this one. Is this similar to when Fox decided the Alien films no longer needed to credit Giger?
posted by FatherDagon at 12:52 PM on January 16, 2020

I love the comics, I thought the Del Toro films were great, but the writing in this was atrocious. Like, Hellboy's character was just some generic snarky action guy, not Hellboy. Normally I roll my eyes at people complaining about reboots of franchises but this reboot sucks so hard.
posted by EndsOfInvention at 4:13 PM on January 16, 2020 [1 favorite]

And it felt SO LONG. I kept fast forwarding to skip to the next interesting bit, and that includes fast forwarding through some fights and other action scenes which just got boring.
posted by EndsOfInvention at 4:15 PM on January 16, 2020 [2 favorites]

I tried really hard to resist writing this comment, but...

I wanted to like this. I really did...but it has the same problem that I'm seeing in a lot of stuff lately (like recent Doctor Who) where it has about three or four more plots/subplots than it really should, and nothing gets time to breathe.
posted by Mr. Bad Example at 2:46 AM on January 17, 2020 [1 favorite]

What the writers of this version missed is that Hellboy (the character) is funny, yes, but he's funny because his reaction to fighting demons, Nazis, gun-wielding murder gorillas, ghosts, cryptids, Rasputin, blood-drinking dragon-witches, etc., is "this shit again?" He's not quippy, he's cranky.
posted by Holy Zarquon's Singing Fish at 8:16 AM on January 17, 2020 [2 favorites]

Yeah, I loved the Del Toro movies, but I bounced off this _hard_. I had high hopes that Harbour could pick up the gauntlet (uhhh) that Perlman laid down, but it just bored me. Like, baseline failure mode for a comic adaptation, guys.
posted by Kyol at 11:48 AM on January 17, 2020 [3 favorites]

Watched this, didn't love it, agree that the sequence of Hell demons killing tons of people thanks to Hellboy wasn't great, but my main objection is the makeup. David Harbour was so buried under prosthetics that he couldn't really wmte, and there was no reason for it; Harbour looks devilish enough as he is. 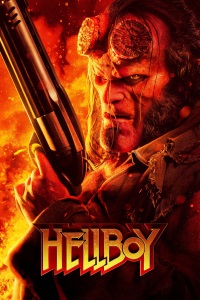