Our world has ended five times: it has been broiled, frozen, poison-gassed, smothered, and pelted by asteroids. In The Ends of the World, Peter Brannen dives into deep time, exploring Earth’s past dead ends, and in the process, offers us a glimpse of our possible future. Many scientists now believe that the climate shifts of the twenty-first century have analogs in these five extinctions. Using the visible clues these devastations have left behind in the fossil record, The Ends of the World takes us inside “scenes of the crime,” from South Africa to the New York Palisades, to tell the story of each extinction. Brannen examines the fossil record—which is rife with creatures like dragonflies the size of sea gulls and guillotine-mouthed fish—and introduces us to the researchers on the front lines who, using the forensic tools of modern science, are piecing together what really happened at the crime scenes of the Earth’s biggest whodunits. Part road trip, part history, and part cautionary tale, The Ends of the World takes us on a tour of the ways that our planet has clawed itself back from the grave, and casts our future in a completely new light.
posted by Homo neanderthalensis (1 comment total) 3 users marked this as a favorite
So I am really sick of a lot of recent books about climate change because they veer between an aura of “we’re fucked no matter what”- even if that isn't the point of the book, and “We can bioengineer our way out of a social problem with this one weird trick!” So I’ve largely stopped reading books that are directly about climate change. Reading about past mass extinctions is so much more calming.

This is a book which goes into great detail about the causes of the planet earths 5 great extinctions. Note I did not say 6th. That’s because while our presence on earth has undoubtedly led to extinctions, compared to the past ones- earth will survive us. In past extinctions sometimes the entire planet was covered in ice. “Snowball earth”. In one, almost 95% plus of all species were sterilized off the earths surface.

But ironically it does look as if all 5 of our mass extinctions were almost certainly caused or at least helped along by disruptions of carbon dioxide. (The K-T impact was bad enough but it looks like it also triggered some basalt stuff- the poor dinos were boned regardless) The book weaves past extinctions and their causes with our own enfolding climate disaster as both a warning and a call to hope. Life will go on- but civilization might not. But if the feathery decedents of dinosaurs survived- so can we.
posted by Homo neanderthalensis at 8:35 AM on February 17, 2020 [2 favorites] 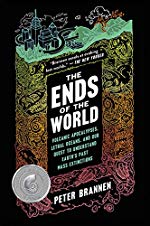