Peter is stuck in the everyday routine of his mundane life until the day he meets a group of strangers who all have something in common and together they begin an adventure into a world that has been hidden all around them. (AMC US broadcast)


The Playlist - Jason Segel’s Mixes ‘Black Mirror,’ Leos Carax & Iffy Social Commentary: "What do you get if you combine the bleak social discourse of “Black Mirror,” the wittingly jarring voice of Peter Strickland, and the dreamlike sensibility of Leos Carax–before adding an unwelcome squeeze of out-of-date social commentary? Jason Segel’s “Dispatches From Elsewhere,” apparently: An anthology series which yields a fascinating metatextual spine and great performances, yet comes up short in its murky musings on contemporary trans politics. The resulting cocktail is potent, and certainly interesting, but strangely saccharine—far from an unpleasant taste, but not one you’d rush to re-order."

Rolling Stone (Alan Sepinwall) Review: A Journey Into the Weird Beyond - Jason Segel’s eccentric new series is colorful, optimistic, and maybe a bit too in love with itself

Variety Review: The new AMC drama — also starring Sally Field, Eve Lindley, André Benjamin, and Richard E. Grant — tells a winding mystery with empathetic detail.
posted by oh yeah! (11 comments total) 2 users marked this as a favorite
Obviously that first reviewer has seen more than just the first episode because I do not recall seeing all that he talks about with Simone. That being said I wish that he could wait for an arc to happen rather than just get set up before passing judgement. I am intrigued to see where this series goes. I am hopeful that it will be surprising and fun.
posted by Ignorantsavage at 9:02 PM on March 1, 2020

I got a little bit of a 'Legion' vibe from the show, maybe from the trippy aspect of things. I think I was expecting this to be a more explicitly/straightforward sci-fi anthology show from the little I'd heard of it in advance.

I absolutely adored this first episode. The opening was brilliant and the episode followed through on its promise. There were so many clever lines. I just love the whole concept, especially because this is something I can see Meow Wolf actually doing in the real world.

This is one of those few works that I feel a tremendous simpatico with in the sense that it's something I would create if I had the drive and talent. I've felt that way about the Fargo series, for example. I guess I'm a product of the same milieu and sensibilities as these writers. And I don't begrudge them at all for accomplishing what I might wish to accomplish; I just find myself deeply happy that the work exists. I love the idea that there's something off-kilter, wonderful, and intensely human just outside the frame of mundanity.

Right at the end, in her bedroom, there was something about how the camera saw Simone that caused me to suspect that she might be transgendered—this had not at all occurred to me before that scene.

If she is, there's nothing I've seen yet that makes me suspicious of how her character will be portrayed. And I will defer to the judgment of those who actually have the lived experience with regard to whether her portrayal is or isn't objectionable.

I also think it's significant that our not-entirely reliable narrator is asking us to explicitly identify sequentially with each of these characters. And about him: what was his one lie?

The discrepancy between the cartoon and reality was very unexpected, but pointed. Perhaps too much so, in that they lampshaded it.

An example of the kind of detail I find both very clever and delightful is how the paddles were all slightly different shades of blue. It's unexpected and strange, yes, but it well could be meaningful. It could represent the way in which we can be simpleminded about how people differ. If these are all shades of blue, does that mean that these many groups of four are any less distinct from each other? I don't think so.

It's great to see Sally Field.

I loved everything about the flier he responded to. Someone must have had the idea to wander around putting up fliers like that. It would be wonderful to see such a thing in the wild.
posted by Ivan Fyodorovich at 7:12 AM on March 2, 2020 [2 favorites]

I really liked the trippy aspects of this (which were my fave aspects of Legion, too) And, overall, it ended up making me want to go down the rabbit hole a bit more. Oddly, though, I'm having a hard time warming to Jason Segel, even as this whole show is his project.

Right at the end, in her bedroom, there was something about how the camera saw Simone that caused me to suspect that she might be transgendered—this had not at all occurred to me before that scene.

Really? The minute Simone started speaking in the gift shop clued me in that she might be transgendered. She has a relatively masculine voice, to my ears. At first, hearing the voice come from her made me think it was being dubbed for some reason. Fantastic actress.

Did anyone else catch that the video at the Jejune Institute featured their cologne product called Nonchalance? And, yet, the Elsewhere crowd are being encouraged to find/achieve nonchalance.
posted by Thorzdad at 9:42 AM on March 2, 2020

I think Jejune and Elsewhere are the same.
posted by Ivan Fyodorovich at 9:47 AM on March 2, 2020

No, I just assumed that it's all some big manipulation. The choice to heed the handwritten warnings on the cards was itself another winnowing.
posted by Ivan Fyodorovich at 11:10 AM on March 2, 2020

I read an interview with Seagel that gives some of the arc away. But to avoid spoilers the interesting bit summarised is that this is based on an art project that had real people respond to flyers to participate in a surreal art mystery. He watched a documentary about the art event, contacted the artists and after they decided they liked the cut of his jib, got the rights to do this.
posted by dorothyisunderwood at 3:20 PM on March 3, 2020 [3 favorites]

(The Jejune Institute documentary is called The Institute, for anyone curious. Currently streaming on Prime and some minor streaming services.)
posted by a box and a stick and a string and a bear at 4:51 PM on March 4, 2020 [2 favorites]

Friendly reminder that the correct term is "Transgender", no 'ed' on the end. It's something you are, not something that happens to you (like the difference between yellow paper and yellowed paper).


I absolutely adore this show. It's sweet, its weird, it's human. I would be obsessed if this happened to me, I don't think I could go back to my regular life.
I also liked the small detail of the paddles - they say to group into the same color, and my initial response is "oh, well they're all blue". I think it was to highlight that maybe they could all be one big group if they wanted to
posted by FirstMateKate at 9:39 AM on March 7, 2020 [6 favorites]

I haven't seen any of this show yet, but since I've been using "Communications From Elsewhere" as a quasi-DBA since 1996, I feel like maybe I should start.
posted by hades at 5:25 PM on March 31, 2020 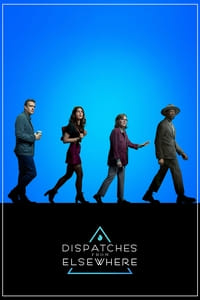