Based on an American manga, the Netflix series Warrior Nun is perhaps best described as a cross between Buffy and The Da Vinci Code with a splash of Ancient Aliens. Mindless fun of bad-ass nuns kicking demon butt while questioning the strictures and motivations of the church they serve.


Short and literally punchy, Warrior Nun takes advantage of Netflix's freeform structure to make episodes no longer than they need to be (some run to an hour, while others are barely over thirty minutes). While mostly silly fun, I thought that there were a few stand-out features:
posted by Bora Horza Gobuchul (15 comments total) 3 users marked this as a favorite
I really wanted to like this but I couldn't get past the bizarre collection of nonsensical accents. For example: Why does an Irish nun run a 19th century style orphanage/convalescent home in Modern Spain? And the main character speaks no Spanish only American English but she's been stuck in the orphanage in a small town in Spain since she was seven? I hate to be nitpicky, but for some reason I really found the mix of accents confounding and illogical. Am I being too hard? Should I try episode 2? Does it get better?
posted by pjsky at 11:02 AM on July 6, 2020 [2 favorites]

It gets better to be fair.
Not with the accents, but in general.

The ending is a bit infuriating (you'll see) but the nuns were cool and it was all in all a good way to binge your way through a weekend
posted by fullerine at 11:59 AM on July 6, 2020

> Why does an Irish nun run a 19th century style orphanage/convalescent home in Modern Spain?

Nuns are sent on mission just as priests are: it's not unusual to find nuns of different cultures in modern parishes. I thought the fact that she was Irish might have been a reference to Ireland's Magdalene Laundries, for reasons that I can't provide without spoiling later episodes.

I'll grant that caring for a quadriplegic in an orphanage is something of a stretch, but it does provide a rationale for Ana's complex relationship with the Church and faith.

And the main character speaks no Spanish only American English but she's been stuck in the orphanage in a small town in Spain since she was seven?

But Ava does speak Spanish (granted, only a few words, but they are part of the dialogue). Where there early episodes when she didn't? I assume that the prevalence of American English is for the audience's benefit: Spanish, Latin and other languages make an occasional appearance in later episodes.
posted by Bora Horza Gobuchul at 12:50 PM on July 6, 2020

I thought this was silly but enjoyable. I was glad they dropped the voiceover as the series went on; I don't know why they decided the first few episodes needed it, but it was clunky.
posted by tautological at 12:54 PM on July 6, 2020

I've watched the first two episodes (and I'm having a lot of fun), but I'm relieved to hear that the voiceover tapers off. The narration is so awkward that I actually spent the first episode squinting at the characters' lips through the dialogue, trying to discern whether this was a stealth dubbing.

I've encountered plenty of Irish accents in the vacation hotspots of Europe (and middle-of-nowhere Catholic churches), so hey I'll give those a pass, but I'm less convinced about tech hub Malaga.
posted by grandiloquiet at 4:16 PM on July 6, 2020

I liked it well enough, and I'll watch a second season if we get one. Yes, the ending made me triple check I hadn't missed the real finale. But overall, sure, I'll give it a go if they make more.

Pros: I enjoyed the variety in nationality of the actors. It felt enjoyably pan-European in a time when Euroscepticism has been bubbling up with increasing frequency. The comic book treatment of geography asked for a lot of suspension of disbelief, but whatever.

Not quite enough action sequences for a show where "warrior" is literally in the name, but the ones they did have were usually edited interestingly, and I really enjoyed them overall. One scene in particular with Beatrice actually made me say "Oh shit, I don't think I've seen that kind of cut before."

I really liked the actresses who played Ava and Beatrice. Lilith was super charismatic as well. Also the actor playing JC so handsome that I didn't even care that his storyline didn't go anywhere I felt was interesting. The woman playing Mother Superion completely grabbed my attention.

Cons: I totally forgot about the voiceovers. I guess a pro is that they stopped doing them, but also wtf.

The pacing. I would struggle to identify where the peaks and valleys in the narrative were over the season. This is an issue I've noticed with Simon Barry's other shows as well (Continuum and Van Helsing), where I feel like things just sort of happen until the season is done, but I'm never really sure what the stakes are, so the dramatic tension feels extremely slack. I don't know if it's the desire to hold onto plot points in case a second season happens, but either way it felt like the same beats kept getting played out without advancing the story.

Character arcs. Where? OK, that's not fair, several characters get decent development. But for almost all of the side characters, they lacked so dimension much they almost didn't need to exist. I'm thinking specifically of the non-Chanel female grifter friend of JC. Her character arc was... be aloof and disapproving from the sidelines until just sort of vanishing? Why?

That leads into a critical lack of specific foreshadowing while relying WAY too heavily on vague foreshadowing of...something? Red herrings and surprise reveals are only fun if we actually have a reason to doubt the red herrings, and surprises are most satisfying when they make retroactive sense or truly change how we see a character. Without firmly establishing a character's motivations, a shocking twist turns into, "Well, I guess so, why not."
posted by wakannai at 7:34 AM on July 7, 2020 [5 favorites]

It is inspiring that a high school freshman can get the first draft of his first screenplay made into a tv show. It is so deliriously bad we are going to keep watching for a bit at least.
posted by snofoam at 4:30 PM on July 7, 2020 [2 favorites]

I think this is way better than its title suggests (I'm 3/4 through). The show kinda came together for me in the scene of a frustrated Lilith whacking away at a giggling, wisecracking Ava.
posted by Ivan Fyodorovich at 11:20 AM on July 8, 2020 [3 favorites]

Yeah, I clicked for the dumb name and stayed for great chemistry between the characters. Beatrice is the Willow character -- except crossed with James Bond, somehow, utterly smooth and brimming with confidence. (More of a Tim Drake Robin, instead?) Mary is the Han Solo character -- except she doesn't need to go through the pretense of being a loner, she's already very certain that she exists to support and be supported by her sisters. Ava, Lilith, and Camila are all more conventional characters...but look, playing a humorless warrior nun without tipping into absurdity isn't easy. Honestly, all of the actresses in this show did a really good job. I really hope there's another season!
posted by grandiloquiet at 2:08 PM on July 10, 2020 [3 favorites]

It looks like there's pretty even gender split on the directing and writing credits for men/women (based on wiki bios and names) and there's also an ep by wtf David Hayter!

Anyone else notice Lilith's hair got progressively more white/grey in the last scene? (also: the one with the demon inside is named Lilith? kinda on the nose...)

And then at the end: demon zombies!!

Energetic genre trash is my favorite indulgence. Looking forward to this.
posted by DirtyOldTown at 8:07 PM on July 10, 2020

Overall we enjoyed it, though for some reason our Netflix never showed the 11th episode which we assume is the season finale (/s). Beautiful locations and appealing cast.

I read an issue of Warrior Nun Areala, which the show is based on, and... nuns in skimpy habits on motorcycles kicking ass in New York. Pentagrams and roided-out demons and male gaze. So I am solidly on Team TV Show here. Looking forward to season 2.
posted by kurumi at 12:34 PM on July 16, 2020 [3 favorites]

Yeah, I can vouch for complaints about the pacing. At least we didn't have to wait a week between episodes, I guess? But between weak pacing and sort of vague foreshadowing and fuzzy goals, it feels like it was written for a full 20+ episode season and had a lot trimmed to make it a 10 episode season. Like, Ava didn't really get into it until what, the 6th or 7th episode of a 10 episode season? That doesn't leave a lot of time for Actual Stakes instead of just passing around the idiot ball.

Ok, Ava? You _don't_ have to join the OCS, but uh maybe I should warn you that if you don't, not only will you be harassed by demons, at least some of the OCS are gonna give you a hard time too. Mayyyyybe don't think you can just run away for 6 episodes in a row. Yes yes, it's a plot point, such as it is, that she can't keep running away yeah yeah, but it was exhausting getting there.

Still, I enjoyed the interplay between the characters once it finally settled in, and I hope there's a second season. Is there any word on the sort of weird-ish Spain / Spaniard / Portugese production? Like, I wouldn't have blinked if it were 100% Spanish and Netflix just picked it up for international distribution, but it seems like it was intentionally shot for an English speaking audience.
posted by Kyol at 7:19 AM on August 3, 2020 [1 favorite]

Netflix is required to make a certain amount of locally-produced content for many of the countries it operates in. Which seems to be resulting in Netflix farming out their productions to various places around the world.
posted by 1970s Antihero at 7:15 AM on August 4, 2020 [2 favorites] 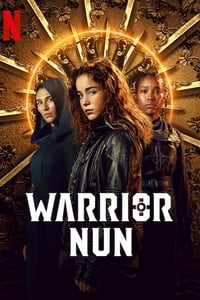