Butcher has no more intentions to fight with Sups but Black Noir traced his location and found him what will he do now? Sups are shooting a film name - #Dawn Of The Seven. Homelander and Stormfront have a meeting of the minds and powers.
posted by Brandon Blatcher (13 comments total) 2 users marked this as a favorite
Another good episode as the various story arcs cement the inner workings while building to no doubt larger season finale/battle. One thing that struck me is how the various groups, from the Seven to The Boys themselves really don't want to be a group. They've all been brought together by circumstance and almost all the various members would prefer to be anywhere else. Except for Stormfront and Homelander, of course. What would they name their baby, Homefront? Storm Lander? 'Murica?

Anyway, Frenchie's decision to leave Kimiko and presumably the entire chain of bad shit behind was probably the smartest any of the characters have been. But you know it won't last, right?

Black Noir still is fun mystery. Robot? Cyborg? Personally created super type for Mr Edgar? Telelphone operator? He's definitely reporting more to Edgar than Homelander, which raises the question who he is personally e.g. does he have any thoughts or allegiances of his own? I was half expecting him to Lenny, Buther's brother and suddenly join the fight, but nope.

The Deep was in this episode too and it wasn't too bad of an appearance. Because it was short and point blank mocked and dismissed by Maueve and that's never a bad thing. Sounds like the Church has its own aims for the Seven, which don't appear clear to me, probably just wanting power.

Which gets to the heart of much the series. Who has the power, who wants it and what do they do with it. Some characters have literal super powers but very little power over their lives. Others have those powers and they think for good, only to discover that they too have little to no power to change things. Homelander has the most physical power, no one can stop him from doing anything, yet in many ways he's the most manipulated and in service (both wittingly and unwittingly) to those who hold the real power

- When Stormfront and A-Train are having their discussion on-set Stormfront's drink cup actually reads "Storefront".

- Ashley (paraphrasing): "I was Barcelona's paella"

- "Laser these tits!" so cheesy, let the delivery was great

- The press team trying to get Maeve and Elena to be a stereotypical lesbian couple and Elena quipping "Maeuve is bi," which is pointedly ignored. Gross, but can totally see that happening.

The only thing I have to add to BBlatcher’s great observations above is that Butcher’s farewell to Judy is “You’re all right for an old bat.” The role of Judy is played by Barbara Gordon.
posted by ricochet biscuit at 4:40 PM on September 18, 2020 [9 favorites]

I appreciated the twist that Judy has been pressed into being a drug dealer for older folks under capitalism, a quick, funny way to deepen a side character while moving the plot. Fun.
posted by eustatic at 11:06 AM on September 19, 2020 [1 favorite]

Not gonna lie, I was hoping we’d find out that Butcher was actually from a nice middle-class family in, say, Ohio and his shitty attitude and ridiculous accent was part sham, part intimidation, part him trying to look cool.
posted by Ian A.T. at 11:13 AM on September 19, 2020 [1 favorite]

The overhead scene with Homelander dreaming about mowing down a crowd in 3 seconds with heat vision was really well done, it was actually chilling without being gross-out direct like the face peel.
posted by benzenedream at 1:59 PM on September 19, 2020 [7 favorites]

When he lasered the crowd, I thought they were going full-on Irredeemable.

They let that fantasy go just long enough that I thought it was going to be genuine. I love that Homelander has no clue how to relate to humans.

I was interested to finally see Stormfront and A-Train interact without anyone else around. Aya Cash's delivery of, "Of course not. Why would you say that?" was perfect. Gaslighting can be a super power too.
posted by gladly at 6:33 AM on September 22, 2020 [3 favorites]

I love Black Noir as a running gag. In the whole first episode he didn’t do anything or say anything and was just kind of there. There was an especially hilarious bit in Season 1 when Homelander is dressing down the Seven for being useless and disappointing but stops to say, “not you Black Noir, you’re doing great,” and BN gives a slight nod of appreciation.

Then Season 2 kicks off with Black Noir’s ruthless infiltration and assassination of the supe terrorist, and he’s not just a joke anymore. The bit where he uses the plush bunny to put the child at ease while he’s holding a severed head in his other hand was wonderfully twisted. Now, when you suddenly see him crouching on a rooftop across the street in broad daylight, it’s both hilarious and terrifying.

The sequence where they're hiding in the basement and Black Noir is setting off traps was pretty funny too.

Urban is from New Zealand and still lives there AFAICT. Watching videos of interviews, it sure seems like his accent is not that thick in real life, that he's going for some kind of tough guy street thug heavy version of an NZ accent.

But not being a N Zealander myself I would not feel qualified to comment on how accurate it may be or call it ridiculous.
posted by soundguy99 at 6:18 PM on October 7, 2020 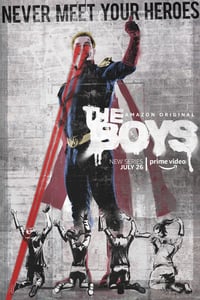