A wayward daughter invites her dying mother and the rest of her estranged family to her apartment for Thanksgiving dinner.


April (Katie Holmes) was once the favorite child, but is now estranged from her family. Her new boyfriend (Derek Luke) though gives her confidence that she is making a life for herself and encourages her. so she invites her parents (Oliver Platt and Patricia Clarkson), siblings, and grandma to come to Manhattan from the suburbs to Thanksgiving dinner, the last her dying mother will probably see. April has a problem though: her oven is broken.

Wikipedia has all the info. This was director Peter Hedges first time out.

Poster's thoughts:
I caught this movie already in progress on IFC one day several years after it came out. I had never heard of it before, but the premise was interesting and the actors were all people with whom I was familiar, so I started watching.

The movie has a lot going for it. Katie Holmes as April is just perfectly cast. According to Wikipedia, the movie took awhile to get off the ground, but Katie stuck with it all along and her feeling for the rule that led her to stick with it definitely shows.

The other standout is Patricia Clarkson as the dying mother Joy. She was nominated for several awards, including an Oscar for Best Supporting Actress. 2003 really was her signature year with Pieces of April and The Station Agent.
posted by Fukiyama (1 comment total) 4 users marked this as a favorite
I haven't seen this since it came out, but I remember liking it and thinking that Katie Holmes did a great job.
posted by ActingTheGoat at 5:14 PM on October 18, 2020 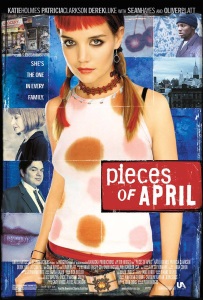