Shawn Spencer happens to possess some uncanny powers of observation thanks to his father, Henry, a former police officer who taught his son to remember even the smallest details of his surroundings. When Shawn is accused of committing a crime that he actually solved, he convinces the cops that he's a psychic -- and with the reluctant help of best friend Gus, Shawn starts solving cases for a skeptical but increasingly impressed police force.


From wikipedia: "Most episodes begin with a cold open in the form of a flashback to Shawn and Gus's childhoods. The flashbacks usually involve Shawn and Gus being taught a lesson by a young Henry Spencer (Shawn's father) (Corbin Bernsen), who wishes that his son would follow in his footsteps and become a law enforcement officer. These lessons often play a role for the climax of the episode. As a child, Shawn was taught by Henry to hone his powers of observation and deduction, often using games and challenges to test him. Each flashback also sets the theme for the episode.

Shawn originally becomes known as a psychic when, after calling in tips on dozens of crimes covered on the news which help the police to close the case, the police become suspicious of his knowledge. The police theorize that such knowledge could only come from the "inside" and they decide to arrest him as a suspect. To avoid being sent to jail, Shawn uses his observational skills to convince the police that he is psychic. The interim police chief warns Shawn that if his "powers" are fake, he will be prosecuted. With no choice but to keep up the act, and having proven himself an effective aid to the police in solving crimes, he establishes a psychic detective agency, Psych, and becomes an outside consultant to the police. Pretending to have psychic powers allows him to engage in strange and comic behavior as he turns real clues into hunches and otherworldly visitations. He enjoys teasing lifelong friend Burton Guster (Gus), a pharmaceutical sales representative, about Gus's eclectic interests as they drive around in a blue Toyota Echo nicknamed "The Blueberry" solving crimes.

Head detective Carlton Lassiter (Timothy Omundson), playfully nicknamed "Lassie" by Shawn and Gus, quietly respects Shawn's crime-solving skills, but doubts his psychic abilities and is constantly exasperated and/or infuriated by his antics. However, junior detective Juliet "Jules" O'Hara (Maggie Lawson) and Chief Vick (Kirsten Nelson) are far less antagonistic – with O'Hara expressing belief in Shawn's abilities, while Vick is mum on the subject – and usually willing to give Shawn the leeway he needs to solve cases. Henry and Shawn have a difficult relationship, but despite this, Henry reluctantly helps Shawn on various occasions."

The movie on fanfare.
posted by Carillon (5 comments total) 3 users marked this as a favorite
I've been rewatching during the pandemic and its been fun and light-hearted to revisit. Shawn can definitely be a bit much but I really love the others around him, Gus specifically, but Lassiter, Jules and Chief Vick are all top notch.
posted by Carillon at 11:23 AM on November 23, 2020

The very first episode has two Stargate people: Don Davis and Christopher Heyerdahl (before he did Sanctuary/Stargate/Twilight/etc.).

I enjoyed this show for such a long time, but now I struggle a lot with anything that breaks policing rules. It's easier for me to put Psych into a "not real world" category in my head, because their version of Santa Barbara is much moister than the real thing, and doesn't have a weird font on its street signs.
posted by rednikki at 7:50 PM on November 23, 2020

Psych is televised comfort food. It's mostly ridiculous but coasts by on light-hearted tone and good cast chemistry. They used to run marathons on the little-regarded cable channel ION, which is kind of the perfect place for a show like this to call home.
posted by Atom Eyes at 1:26 PM on November 25, 2020

My wife streamed this a few years ago, it looked really dumb based on previews. I was really surprised how much I liked it, it's so unpretentious and fun.
posted by skewed at 6:53 AM on December 4, 2020

There was one bit of physical comedy in the pilot that killed me. I think it's when Shawn has realized that Lassiter is really going to arrest him over the crime that he solved, and goes all in on his "I'm really a psychic" ploy - I forget the line, maybe Lassiter saying something like "Is anyone actually buying this?!" and from one of the cells a prisoner raises a hand through the bars. The sight of that lone hand poking out was so unexpected and perfect, that was when I knew the show was something special.
posted by oh yeah! at 6:33 PM on December 4, 2020 [1 favorite] 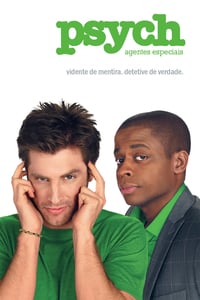