Gonzo, who is haunted by the fact that he doesn't know what he is or where he came from, is delighted when he is contacted by his alien family through his breakfast cereal. But when the men in black realize he's an alien and kidnap him in order to examine his brain, it's up to Kermit and the gang to rescue Gonzo and help him reunite with his long-lost family.

On Rotten Tomatoes, the film has an approval rating of 63% based on 57 reviews, with an average score of 6.17/10. The site's consensus reads "If Muppets from Space lacks the magic and wit of its cinematic predecessors, this pleasingly silly space romp is funny and clever enough to make for better-than-average family entertainment."

Roger Ebert of the Chicago Sun-Times gave the film a two-star rating (out of four) and concluded his review by saying that "maybe Muppets from Space is just not very good, and they'll make a comeback. I hope so. Because I just don't seem to care much anymore." Conversely, Robin Rauzi of the Los Angeles Times gave the film a positive review, stating that "twenty years after The Muppet Movie and 30 after the beginning of Sesame Street, there is still life in these creations of felt, foam rubber and fake fur. With care, they will easily entertain and educate a third or fourth generation of children. The magic is back."

Michael Wilmington, reviewing for The Chicago Tribune, praised the puppeteers' performances, but remarked "[t]his picture isn't goofy or dreamy enough, however engaging it may be to re-encounter the intrigues of Miss Piggy, the wistfulness of Kermit or the weirdness of Gonzo. Or relax into the period funk soundtrack (including the O'Jays' "Survival," Earth, Wind and Fire's "Shining Star" and many others)." Lawrence Van Gelder of The New York Times felt the "Frenetic movement and loud music overwhelm warmth and compassion, and the balance of character, plot, irreverent humor and innate decency that made some of the earlier Muppet movies so welcome is lost."

In a 2000 interview, Frank Oz described the film as not "up to what it should have been," and "not the movie that we wanted it to be."
posted by orange swan (7 comments total) 1 user marked this as a favorite
Pepe: Hey, Kermit. When will you fix the oven, okay?
Kermit: What's wrong with the oven?
[oven explodes]
Pepe: That.

I thought this one was pretty watchable, if not great. It had a cute storyline, and I loved seeing what daily life was like for the Muppets.

I did find myself wishing Gonzo had taken a trip to outer space to visit his family and get to know them, and then come back home to his Muppet friends, though. Dude, you don't even know what you're turning down.
posted by orange swan at 12:43 PM on December 12, 2020 [1 favorite]

I just watched this. I wish it had sustained the fun of the Brick House opening, which was joyous. It was cute in other parts, but lost momentum. I read that it was supposed to have a ton of sci fi reference jokes, which they cut at the last minute, although you can still plainly see the setups for these jokes in the movie.

The secret alien defense headquarters (COVNET) was probably a reference to SHADO in Gerry Anderson's UFO. SHADO headquarters is disguised as a movie studio (the actual studio where the show was filmed, in fact), while COVNET is disguised as a cement factory (which the actual movie studio where the film was shot used to be). And, of course, they are both led by a guy named Ed.
posted by jabah at 10:20 PM on December 12, 2020

Huh, when you said “cement factory” and remembering that there are beachy scenes, I wondered “Ideal?” and went to check IMDB. Sure enough, it was filmed at Screen Gems and Ideal Cement factory (back when it was still functioning - ETA my bad nope it wasn’t that would have been much earlier sorry). So, having worked out there for a few productions, I’ll share that it is AWESOME urban-adjacent exploration. It’s been long time since I’ve watched this particular Muppet movie, but trying to explain the massiveness of the plant and the buildings and other features is difficult. It dwarfs the stages at Screen Gems themselves. The design elements of the buildings are really neat too, which some period architectural features.
posted by sara is disenchanted at 12:17 AM on December 13, 2020

I remember seeing this in the theater and thinking it was a lot of fun. I love when the Muppets do topical references that will become dated immediately (the Dawson's Creek cameo here).

Later, after seeing The Muppets in the theater, I felt like "Wow, they really recaptured the magic this time." Muppets from Space is not that. But it's a good time nonetheless. I love that big bear.
posted by rikschell at 8:15 AM on December 13, 2020

I read that it was supposed to have a ton of sci fi reference jokes, which they cut at the last minute, although you can still plainly see the setups for these jokes in the movie.

Science fiction isn't my genre and I'm not familiar with any of it except The X-Files. I was so, so hoping for an X-Files reference, but it never happened, unless you count the fact that Hulk Hogan appeared as a man in black, as he does in the X-Files episode "Jose Chung's From Outer Space".
posted by orange swan at 10:41 AM on December 13, 2020 [1 favorite]

I enjoyed this movie a fair amount but the soundtrack hits above it's weight and has stayed in my library for decades.
posted by Uncle at 1:44 PM on December 13, 2020 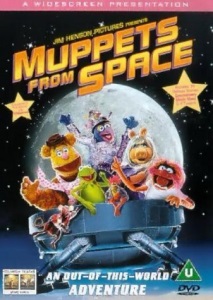