When young Josh Waitzkin's parents discover he is a chess prodigy after he picks it up by watching games played in the park, his father hires chess coach Bruce Pandolfini who is searching for the next Bobby Fischer.


Wikipedia has all the details, including: The film currently has a 100% rating on Rotten Tomatoes based on 42 reviews, with a weighted average of 8.13/10. The site's consensus reads: "As sensitive as the young man at its center, Searching for Bobby Fischer uses a prodigy's struggle to find personal balance as the background for a powerfully moving drama".

Ebert: The film is the first intelligent one I can remember seeing about chess. That is the case even though no knowledge of chess is necessary to understand it, and some of the filmmaking strategies - such as showing most of the moves at lightning speed - simply ignore the periods of inaction in games. It is intelligent because it is about the meaning of chess, a game that has been compared to war and plundered for its lurking Freudian undertones, and yet is essentially just an arrangement of logical outcomes.

Janet Maslin: The well-invoked world of chess has a similarly bracing effect. Mr. Zaillian's single smartest move has been to cast Max Pomeranc, an 8-year-old who is himself among the 100 top-ranked American chess players in his age group, as the story's young hero. This young actor has no trouble conveying the intense concentration that goes with playing the game, along with the slightly distracted air that accompanies anything else. Aside from giving a performance that is touching and credible in its own right, Mr. Pomeranc beautifully communicates the quiet enthusiasm of a true chess devotee.

A look at where parts of the movie were filmed in NYC.

A good synopsis of the memoir by Fred Waitzkin on which the movie is based.
posted by Fukiyama (3 comments total) 1 user marked this as a favorite
The acting in this movie is first rate. This is one of Ben's best performances. Joe and Joan are my favorite movie parents. Laurence does his thing (he even reminded me of Morpheus at one point, standing with an arm behind his back), and Max's performance is so precocious.

The overall plot is conventional: ubermensch has ups and downs before making good. But the characters and writing are excellent; there is a lot going on in this movie. It's not just Josh's story. Fred grows as much as his son does. And Bruces comes around as well. Even William H. Macy has a character arc and his wasn't even really a supporting character!

And that's another thing, SFBF rounded up a lot of actors who were or would be great. Ben Kingsley, Joe Mantegna, Joan Allen, Laurence Fishbourne, William H. Macy, Laura Linney, Dan Hedaya. That's a lot of talent, even in limited roles, for a little early 90s chess movie.

I was surpised Netflix didn't have SFBF lined up (and Pawn Sacrifice as well) when TQG came out. Seems like a no brainer.
posted by Stuka at 10:08 AM on December 23, 2020 [2 favorites]

I enjoy Searching for Bobby Fischer.
It's a movie that knows what it wants to be, it doesn't hammer some deep philosophical message.

It's a just a man and a son learning about each other and learning a little about life on the way.

Wow, I didn't know the kid was a real chess player, that's really cool. I would think a lot of actors could play that part bit by bit, scene by scene, but I bet he has a lot of details that are unique to him and to actually playing chess. Stuff a rube like me can't notice but that improves the texture of the movie. And how often is there a story with a crescendo of Stage Dad action, with Mom being the moderating force?

I also liked there were a few "As Himself" credits, casting legit people is always good in a subculture movie. I'll have to chase those down. 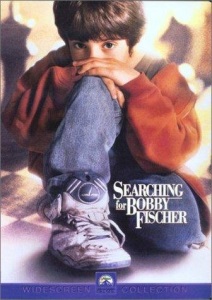