Long ago, Earth's terraforming program sent ships out to build new homes for humanity among the stars and made an unexpected discovery: a planet with life. But the scientists were unaware that the alien ecosystem was more developed than the primitive life forms originally discovered. When the Old Empire fell, the scientists were on their own.


Now, thousands of years later, the Portiids and their humans have sent an exploration vessel following fragmentary radio signals. They discover a system in crisis, warring factions trying to recover from an apocalyptic catastrophe arising from what the early terraformers awoke all those years before.

The Portiids and Humans from Children of Time are back, and this time they're exploring a new system with yet more remnants of Old Earth technology and an uplifted species. Plus something... different.
posted by fifteen schnitzengruben is my limit (7 comments total) 4 users marked this as a favorite
I'm about halfway through this one now, and I like what the society built by our Portiid and Humans has become.
posted by fifteen schnitzengruben is my limit at 8:14 PM on January 16, 2021 [1 favorite]

As i mentioned in the previous thread, i think this one may be superior. I love that we get a view of three different societies, radically different in ideas. In children of time we learnt about spiders almost as a reflection of our own cultural evolution, but here the goal is to portrays what happens when truly alien cultures encounter one another.


I love the hopeful note this is able to strike, of intelligent beings of completely different nature are able to come together.
posted by Cannon Fodder at 12:14 AM on January 17, 2021

Overall, I thought this book was more inventive and daring than the first book, but I ended up liking it slightly less.
posted by kyrademon at 7:00 AM on January 17, 2021 [1 favorite]

really the only way i can read these is by mentally rendering them in studio ghibli style so that the (awesome!) portiids don’t trigger me

and then i’m like, huh, “ghibli filter”, that’s a pretty close approximation to an empathy virus
posted by sixswitch at 3:37 PM on January 17, 2021 [5 favorites]

"So I'm a Spider, So What?" is another anime that tackles the tricky problem of making spiders as cute as possible.
posted by Mr.Encyclopedia at 6:00 PM on January 17, 2021

I can't be the only one who pictured Artifabian as a little Tachikoma from Ghost in the Shell, can I?
posted by fifteen schnitzengruben is my limit at 12:17 AM on January 18, 2021 [1 favorite] 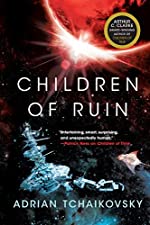