C.S. Lewis, a world-renowned writer and professor, best known as the author of the Narnian Chronicles, leads a monastic life as an Oxford don until he meets the spirited American poet Joy Gresham.


Shadowlands received positive reviews from critics. The review aggregator website Rotten Tomatoes reported that 97% of critics have given the film a positive review based on 30 reviews, with an average rating of 8.02/10. The site's critics consensus reads, "Thanks to brilliant performances from Debra Winger and especially Anthony Hopkins, Shadowlands is a deeply moving portrait of British scholar C.S. Lewis's romance with American poet Joy Gresham."

Rita Kempley of The Washington Post described it as "a high-class tear-jerker" and a "literate hankie sopper" and added, "William Nicholson's screenplay brims with substance and wit, though it's essentially a soap opera with a Rhodes scholarship . . . [Winger] and Hopkins lend great tenderness and dignity to what is really a rather corny tale of a love that was meant to be."

In Variety, Emanuel Levy observed, "It's a testament to the nuanced writing of William Nicholson ... that the drama works effectively on both personal and collective levels ... Attenborough opts for modest, unobtrusive direction that serves the material and actors ... Hopkins adds another laurel to his recent achievements. As always, there's music in his speech and nothing is over-deliberate or forced about his acting ... Coming off years of desultory and unimpressive movies, Winger at last plays a role worthy of her talent."
posted by orange swan (4 comments total) 3 users marked this as a favorite
I'm just here to say that Winger's awesome in this movie, utterly awesome.
posted by kingless at 2:16 PM on January 20, 2021 [1 favorite]

Nearly thirty years later, and I remember still how Anthony Hopkins and the boy who played Gresham's son just sat and howled and held each other after she died in the film. Most movies are so careful to show only "pretty" crying, and this was raw and realistic and ugly and heartrending. It's a good movie, although I am obviously convinced that CS Lewis was a bit more nuanced than shown. Still, good show.
posted by seasparrow at 11:36 PM on January 20, 2021 [2 favorites]

I remember the first time I ever saw this movie. I was visiting a friend at her place in either Chatham or London, Ontario, circa 1995. One night we rented three movies to watch. We both wanted to watch a Harrison Ford movie -- I don't remember which one -- so we got that one, and then agreed we would each pick one other movie. She picked Speed. I picked Shadowlands. She was kind of an asshole about my pick, saying, when she saw it, "That looks stupid and boring and I don't want to watch it." I wanted very much to see it and didn't back down. And then we saw it and she LOVED it. I found the movie so heartbreaking and was trying to hold the tears back after the death scene, because I thought she'd make fun of me, and then I took a furtive look at her, only to see that she was an utter bawling mess. We're not in touch anymore but she referred to the movie an number of times after that and griped how I'd "made her" watch it and that she'd had to eat her words about it, and only a few months later she told me she rented it for her mom and her to watch together because she wanted to see it again and she wanted to see if her mother would also wind up sobbing over it.

We also both very much enjoyed this classic exchange:

Christopher Riley: Congratulations, Jack, you seem to have found a soul mate.
C.S. Lewis: I thought you believed we didn't have souls, Christopher.
Christopher Riley: Well, yes. Now, I regard the soul as an essential feminine accessory -- anima, quite different from animus, the male variant. This is how I explain the otherwise puzzling difference between the sexes. Where men have intellect, women have souls.
Joy Gresham: As you say, Professor Riley, I'm from the United States, and different cultures have different modes of discourse. I need a little guidance here. Are you trying to be offensive, or just merely stupid?
Christopher Riley: [is flabbergasted and speechless]
C.S. Lewis: [to Joy, and clearly barely able to contain his delight and amusement] Let me introduce you to some friends of mine.
Joy Gresham: [politely to Riley, as she departs with C.S. Lewis] Excuse me, I'm sorry.
Christopher Riley: [is still flabbergasted and speechless]

It was so satisfying because, once Riley laid that ridiculous egg, we knew Joy Gresham was going to make mincemeat of him, and she did.

Joy Gresham: Jack, don't you sometimes just bust to share the joke? Here's your friends thinking we're unmarried and up to all sorts of wickedness, when all along we're married and up to nothing at all.


The film is not entirely historically accurate, of course. Joy Gresham had two sons, Douglas and David. The timeline has been compressed for the movie. Gresham and Lewis began corresponding in 1950, met in person in 1952, married in 1956, and had four years together before Gresham died in 1960. During that time they travelled in Ireland and Wales and Greece, and Joy organized her husband's finances and wardrobe, helped him with his writing, and renovated and redecorated The Kilns, C.S. Lewis's house. Lewis only survived her by three years, dying in 1963, with the two boys barely having reached adulthood.

Joy Davidson Gresham was an interesting, talented, highly intelligent and accomplished person, and it is such a tragedy she died so young, at only 45, after more than her share of hardship. She could have done so much more if she'd had a more average life span. Though she would have had more to face had she lived longer, because her son David was diagnosed with paranoid schizophrenia as a young man.

I find the review that describes the relationship as "corny" and a "love that was meant to be" to be irritatingly off the mark. There was nothing fateful about this relationship, and its depiction seemed unusually realistic and natural to me. Love can surprise us, as it surprised C.S. Lewis, by sneaking up on us in the form of unlikely people, whom we never initially considered in a romantic light, but who unexpectedly fit us so well that they eventually become an inseparable part of our life, almost without our realizing it. It was not until late 1956, when Joy Gresham received her cancer diagnosis, that Lewis realized how much he loved her. I loved the way this movie depicted their relationship, as the meeting of two fine and original minds, and showed the sheer pleasure they had in each other's company, and how they challenged and inspired one another. And then, of course, there was the movie's treatment of loss and grief, and its many thought-provoking lines.

It's a fine movie both as to its script and its acting, both moving and of intellectual substance, and with its share of quiet humour.
posted by orange swan at 6:44 PM on January 21, 2021 [3 favorites]

“The pain then is part of the happiness now. That’s the deal.” 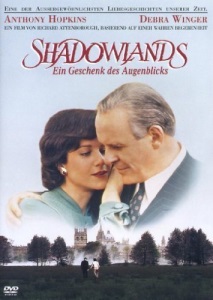