Calvin, Beth, and their son Conrad are attempting to get back to normal after Conrad's return home from a psychiatric hospital. Conrad visits Dr. Berger who works with him to not push away his pain.


This is one those movies from around the time I was born that won a bunch of awards, had Name actors and a Name director, but I never, ever saw it on cable TV growing up. So one day in the last year or two I put it at the top of my Netflix DVD queue and it eventually came in the mail.

I've been thinking about how to put a post together for this movie, but I've decided to just go with it. I'm interested in seeing how many folks have seen this movie and if they reacted to it the same way I did. I'll just say that as far as patient and psychiatrist movies, this one blows all the others out of the water. The big scene between Conrad and Dr. Berger left me wanting to jump up and down.

Everyone is great in this. Robert Redford as a first time director shows he has the skills needed for the job. The adaptation of the novel won an deserved Oscar. And this is the movie that put Pachelbel's Canon on the map.
posted by Fukiyama (12 comments total) 7 users marked this as a favorite
I was Conrad's age when this movie came out, and I could so relate to him and what was going on. Also, Pachelbel's Canon in D was permanently imprinted on my brain thanks to this film, and for that I'm grateful.
posted by sundrop at 7:20 AM on February 12, 2021

Ordinary People is a great film. Maybe even too good. Like the OP, the movie came out just a little before I was born. So growing up, I was aware of it and its greatness. But I never saw it. I don't remember seeing it on as a movie of the week on network. I don't remember seeing it in rotation on HBO or Cinemax. Why? Too hard hitting? Too cerebral?

That being said, why isn't Ordinary People on more now? Kramer vs. Kramer, maybe the closest contemporary movie in subject matter, has been on enough times over the years that I've seen it all the way through at least once, and bits and pieces more times than I can remember. And yet I can't say the same for Ordinary People. Why not? Is it still too hard hitting? Too cerebral? Or was Ordinary People so good that while its audience couldn't handle it casually on network or subscription, time passed it by, and its late 70s/early 80s conception of a family falling apart is quaint and no longer relevant?

By the way, there is no better movie/television father than Calvin Jarrett.
posted by Stuka at 8:07 AM on February 12, 2021

Ordinary People gets some flak for being the movie that won the Best Picture Oscar INSTEAD of Raging Bull, and oh the injustice of it all. Most of the folks who complain about that haven't actually seen it though. One of my college film courses spent a whole week on it though. It's a great film, but it can be painful to revisit because the emotional trauma of it is very raw and well-played.
posted by wabbittwax at 10:11 AM on February 12, 2021

I actually watched it circa 99 on the recommendation of my psychologist. I have to admit, I don't remember a lot about it (I was dealing with SA trauma therapy and a shit ton of PTSD and hospitalizations). I do remember it being impactful. Dr. D and I spent at least 1, if not 2, sessions talking about it. I think I might need to rewatch it.

Around the same time I watched Girl, Interrupted and Good Will Hunting, both which hit hard.
posted by kathrynm at 11:25 AM on February 12, 2021

Raging Bull should have won, but the majority of AMPAS voters are actors, and they vote for each other in any and all categories. Redford’s other directorial efforts were adequate.
posted by Ideefixe at 11:58 AM on February 12, 2021

This came out when I, myself, was a teenager in Chicago who was seeing a counseling psychologist, so you can well imagine how relevant I found it. And I'm pretty sure that Scorsese lost to lesser films in other years.
posted by Halloween Jack at 11:59 AM on February 12, 2021

I saw this film when it first came out. I went with several friends, and when it was over, we just sort of sat there in the theater, stunned. I remember how floored everybody was with Mary Tyler Moore's performance, especially. I don't feel like it's a film you'd watch over and over, which may help explain why it did not become one of those films that runs on TV a lot.
posted by briank at 12:37 PM on February 12, 2021

Gonna be honest, I'm a little hesitant to add this comment because I don't really want to start a derail but I feel like I want to give a ful comment. So here goes.

I only saw it for the first time fairly recently (2019, maybe?) and wanted to watch it because I'd been watching a documentary about Mary Tyler Moore and wanted to see her performance. There's a lot that I loved about watching this movie.

But here's the potential derail. I hope there can still be fruitful discussion about the topics brought up in the film about the nature of grief and of the terrific performances.

But I don't think it's a movie I'm ever going to revisit because not long after I saw it, I came across some awful allegations about Timothy Hutton and I really don't think I could watch any of his performances again, no matter how good he is. Back in a thread about Harvey Weinstein being sentenced, a commenter left this comment (which includes a link to an article about Timothy Hutton).

I don't really want to start a "separate the art from the artist" discussion at all as it's been a topic of conversation in recent FPPs on Joss Whedon and Armie Hammer. And there are arguments about collaborative mediums saying why should we ignore the excellent work of many just because one person who worked on a project is outed as an abuser. I can see that point. But I do find it extrememly difficult to do that for actors because I have to actually look at them.

Anyway, Ordinary People is a great film that I will never watch again.
posted by NotTheRedBaron at 12:39 PM on February 12, 2021 [1 favorite]

When this film came out, there was A LOT of press about the director (first film, famous actor) and the female lead. For Mary Tyler Moore, this was a complete departure from her sunny optimistic tv character that most people tended to associate her personally with. For Robert Redford, a huge accolade, and this probably led to the creation of the Sundance Film Festival.

It's also a lot more unflinching portrayal of the type of MidWest "nice" that smothers, that buries, that sacrifices the happiness of one for the seeming tranquility of all so as to present a facade for the neighbors. It's been on streaming services for a couple of years, on and off, in cycles; I would suspect that it's not as prevalent as other films of its time period due to the director still being a powerful force in film. It might have to due with distribution rights, etc.

I loved this film when it came out. Especially later, slogging through the absolute crap of most tv and movies about women as mothers, as all encompassing loving symbols and also sex fiend murderesses. This film shows the complexity of family life, the favoritism and rigidity, in the desire to be better than the neighbors.

NotTheRedBaron, I had a friend who kept pushing me to watch Beautiful Girls, in which T.H. is playing this teen angst guy despite not being that while leering after a much younger woman. I could never finish it and have always had a deep reserve about the person who loves that film so much. I appreciate your link and comment, I don't want a derail either, but good to have some context about all the players here.
posted by winesong at 1:41 PM on February 12, 2021 [1 favorite]

It's on Amazon Prime if anyone is interested in rewatching it.
posted by kathrynm at 4:25 PM on February 12, 2021

Upon rewatching last night, the sort of role reversal of mom and dad was interesting. I think that’s one of the things that makes it such a great movie. It very much breaks stereotypes. I’m assuming it was pretty progressive for the late 70s early 80s.
posted by kathrynm at 1:38 PM on February 13, 2021

I love this film and was a senior in HS when it came out. I’ve watched it many, many times and I always cry at various parts. All the performances are perfect and I can’t imagine any other actors playing any of the roles.
I will admit I used to use this movie as a sort of screening question when I was dating someone new, as in “Have you seen Ordinary People? What did you think?”
posted by bookmammal at 7:55 AM on February 14, 2021 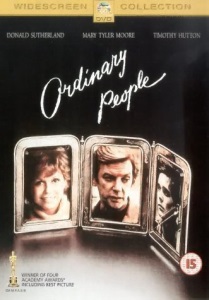