A young working-class woman named Majella navigates a constrained life in Northern Ireland sometime after "peace broke out" in Ireland in the nineties. Some things distinguish her from her fellows: she's not social at all, she's unusually sensitive to sensory input, and her grandmother was just murdered.


And yes, this is a dark comedy. Grab some fish and chips, add some vinegar, and settle down to read or listen.

The word "autism" never comes up in the book, but if you're an autistic woman, chances are Majella's world will feel familiar. And the character, whose role models are her long-absent father and J.R. Ewing from "Dallas," lands in a good spot.

The dialect comes fast and furious, and the author, first-time novelist Michelle Gallen, has done us the great favor of providing an online glossary.

The audiobook, read expertly by Nicola Coughlan (Clare on "Derry Girls"), may be the best way to go.... although if you have auditory processing issues and aren't from Ireland you may want to stick with the written word.

Michelle Gallen is not autistic herself. However, after a bout of autoimmune encephalitis, she is neurodivergent and has studied autism and autistic people with compassion.

Some plot points remain obscure or unexplained at the novel's end. This might bother some people, but as Gallen says in the interview linked above:

There’s a culture of silence in Northern Ireland. The IRA used to say, Whatever you say, say nothing. I know when the book was coming out, I felt very anxious because I thought, Are people going to think that I’ve said things too clearly? My generation was trained not to speak quite so clearly about things that happened. We still don’t.

Big Girl, Small Town is a darkly hilarious novel about small-town life, which manages to be wildly entertaining despite being mostly set in a chip shop – a fine place in which to loiter with such a filthy, funny, clever companion.

The locals with their memorable names – Jimmy Nine Pints, Hairy Feely – see Majella not as a human being but as someone to exploit. Gallen manages to give her protagonist agency despite this. Right from the opening page, Majella (literally) lists her likes and dislikes. This is a damaged, isolated woman, but one who knows what she wants.

posted by Sheydem-tants (1 comment total) 1 user marked this as a favorite
Hmmmm .... this sounds fascinating! Thanks for letting me know.
posted by Jesse the K at 4:39 PM on February 22, 2021 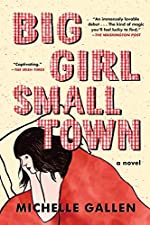