At his own birthday, Steve Guttenberg volunteers to turn his party into a writing workshop when he overhears Roman and writing partner Kent discussing their script.
posted by guiseroom (4 comments total)
OK, I said last week that Jackal Onassis Backstage Party is my favorite episode, and I'm pretty sure it is—it's an episode where the show comes flying out the gate to a second season that builds upon the first in every way—but this episode comes in a very close second and sometimes, if you were to ask me at a time more removed from a rewatch, I might say that this episode might be my favorite. It's a photo finish. That's mostly because of Mr. Steve Guttenberg, who plays a (mostly?) fictionalized version of himself. But is it fictionalized? Somewhat, yes, but at the same time, I don't know anything about Steve Guttenberg, so I don't know if he's that optimistic and positive in real life. It's refreshing to see from a show from this era of mostly cynical comedies. I will say that the kicker joke at the end that he goes home (he's already home!) with Colette is a definite nod to the types of characters he played in the 80s in films movies like Police Academy. Now, I have more to say on this subject...

Party Down is a mostly cynical show, but it's a cynical show about people trying (and mostly failing) to do better by themselves. However, this episode, "Steve Guttenberg's Birthday," is a departure from the norm of the show we have known as Party Down until this moment. From here on out, starting with the celebration of the birth of this wonderful, positive, upbeat, motivating, encouraging man named Steve Guttenberg, it becomes a different show, and you will see that in the last five episodes...

Ladies and Gentlemen, this right here is the birth of the style of 2010 era upbeat comedies that supplanted the cynical shows of the 2000s that have become in vogue over the last decade, something that has largely been credited to Parks & Recreation (and let's not minimize what people like Michael Schur have done for modern television), which premiered a month before this episode aired but wouldn't become the show we know and love until its own second season reinvention, and some might argue doesn't really become the show we know and love until the addition of Robe Lowe and Adam Scott. Gee, what was Adam Scott doing before Parks & Rec?

This episode of Party Down, and you could say Party Down as a whole, started the trend which, over the next decade of television, would give us Modern Family, New Girl, The Mindy Project, Brooklyn Nine-Nine, Unbreakable Kimmy Schmidt, Jane the Virgin, Crazy Ex-Girlfriend, Schitt's Creek, and, the culmination of televisual feel-goodery, The Good Place.

And to that we say, Happy Birthday, Steve Guttenberg!

I love this episode so much. I know some people were saying on earlier posts that they can't take Roman's character, but this episode is the one that makes him work for me.
posted by Ragged Richard at 9:10 AM on March 22, 2021

Addendum to my above comment: I cannot believe I forgot to include Ted Lasso in that list.
posted by guiseroom at 9:01 AM on March 24, 2021 [1 favorite]

I also love this episode, but your hot take was quite the fascinating take! Certainly my favorite thing about the episode was Steve Gutenberg playing himself as this strange character, but a close second is how his gentle, encouraging guidance gets the actors to act well and the writers to write well. That positivity leaking out to change the world of sitcoms is a wonderful idea, even if it meant that a cynical show like Party Down couldn’t return for another ten years!
posted by ejs at 7:38 PM on March 27, 2021 [1 favorite] 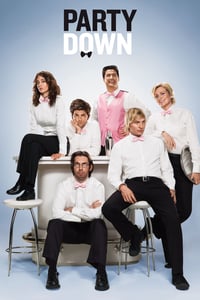