Viktor Navorski (Tom Hanks) is a man without a country; his plane took off just as a coup d'etat exploded in his homeland, leaving it in shambles, and now he's stranded at Kennedy Airport, where he's holding a passport that nobody recognizes. While quarantined in the transit lounge until authorities can figure out what to do with him, Viktor simply goes on living... and courts romance with a beautiful flight attendant (Catherine Zeta Jones).


Directed by Steven Spielberg. Currently streaming in the US on Hulu.
posted by DirtyOldTown (3 comments total) 1 user marked this as a favorite
My kiddo asked to see this, partly because he has (understandable human) affection for Tom Hanks and, I think, partly because based on his mother, he has intense empathy for immigrants stuck in a bad place by bureaucracy.

The weird nowhereland of airports and customs seemed extra real and extra intimidating to me at this point.

And wow, if a person says nothing else about this, let it be said that this is a film from the prime period of Catherine Zeta Jones, who, for a spell, was as luminous and magical a movie star as a generation can hope to see.
posted by DirtyOldTown at 7:54 PM on March 30, 2021

I really enjoyed this when it came out. Partly it was a nice break for a few hours when we had an infant at home but I also remember it being a good story. Hanks makes most things better just by being there. The kids recently said they'd like to see this and Forrest Gump and I'm excited to watch it again and see how it holds up.

The scene where they tell him he can walk out the door (which was a trick to grab him when he did I think - or at least make him not their problem anymore) and Viktor really thinking it over sticks in my head as being especially well done.
posted by Clinging to the Wreckage at 9:30 AM on April 1, 2021

Every part of this movie is so well done in an understated manner. It's criminally underappreciated.
posted by seasparrow at 9:59 PM on April 1, 2021 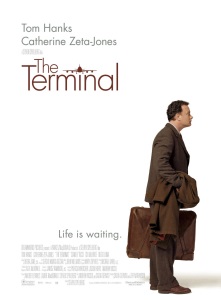