With the city reeling from Maladie's opera debut, Mundi takes a personal stake in tracking her down. Amalia launches an investigation of her own and the charitable Lavinia Bidlow seeks to destigmatize the Touched at a society event. [IMDb]


The big theme of episode 2, directed by Whedon before he exited the show, is how society exploits those who are different. "Horror and fascination go arm in arm," as one character says, and this episode reveals various players at different social strata setting out to manipulate and mistreat the Touched for their own ends.—Richard Trenholm for c|net

What we learn in the episode’s final moments is that Hague’s incapacitated subjects are being conscripted into a brain-dead mining outfit working to excavate a glowing icy-blue orb in subterranean London. (Yes, of course, there’s a hellmouth.)... The mastermind behind the zombified labor operation down in Fraggle Rock is none other than renowned philanthropist Lavinia Bidlow. It’s a pretty satisfying revelation, striking the elusive balance between I did NOT see it coming and Who else could it be?—Amanda Whiting for Vulture

Written by Jane Espenson and Douglas Petrie; directed by Joss Whedon.
posted by bcwinters (12 comments total) 2 users marked this as a favorite
woah! lots of confusing twists and half information. I love the energy and am excited to (hopefully) see a fresh take on some of these plot threads.
posted by rebent at 12:12 PM on April 20, 2021

I read some reviews that said the pacing has been off in these first two episodes but I've been very satisfied with the pacing thus far. I'm really glad some big reveals were chosen to be reveal now rather than dragged out for several episodes and some plots have already been resolved (I swear I thought Mary's abduction was going to last at least 4 episodes). If anything the reveals have made the show more dynamic and generates more questions than provides answers.

Still puzzled by Amalia's identity. She knows Maladie. I'm curious to what Maladie's meant by 'shedding her skin.' I could have sworn there was a reference to Amalia having two souls.

I'm a little disappointed that Augie's ability is basically being Bran. I did some serious eye-rolling when he described flying, it felt very cliche. I hoped he would be able to communicate with birds, which would result in some funny, awkward situations.

Speaking of GOT, must we have another brothel/sex club? Is there a contractual agreement with HBO that all fantasy shows have them?
posted by wasabifooting at 12:45 PM on April 20, 2021 [2 favorites]

Sex clubs make it easier for HBO to fulfill their S1 T&A hook rather than awkwardly trying to shoehorn T&A into any old scene
/s
posted by kokaku at 2:10 PM on April 20, 2021 [4 favorites]

I thought the pacing was acceptable. I can wait this out for a bit to see where it's going.

must we have another brothel/sex club?

I'm curious to what Maladie's meant by 'shedding her skin.'

There was the "this is not my face" comment Amalia made in episode one. Some type of shape shifting?

I'm mostly enjoying this but a lot of comments seem cryptic for the sake of being cryptic.
posted by mark k at 9:45 PM on April 20, 2021 [3 favorites]

I'm guessing there will be some connection between the brother who drowned and Amalia's drowning.
posted by kokaku at 1:19 PM on April 21, 2021 [1 favorite]

I understand everyone resenting Joss Whedon's relentless recycling of his own tropes, but wow did I ever enjoy that resentful, embarrassed, SMG-style line read of "it was a bad gun."
posted by grandiloquiet at 9:15 PM on April 21, 2021 [1 favorite]

I think kokaku has it exactly right. Amalia does some kind of Freaky Friday bodyswap thing with people who die. That's what Malady was Joker-style taunting her with. Lord Sexalot even said something about "...not being in as many fights as my brother, but..." so, combat expert bro drowns at the same moment as the crash over London. Gets switched into Amalia's body. Fierce fighty guy now has to navigate the world in a corset for the next three years.
posted by ssmith at 9:22 PM on April 21, 2021 [2 favorites]

I resent the way this show consistently does only 85% of the work needed to be coherent. Yes, a person can rewind, and think on things, and mentally sort what is unclear versus what is a hint at what's to come, but it's annoying, frankly.
posted by DirtyOldTown at 9:29 PM on April 21, 2021 [2 favorites]

I actually think possibly True can actually only switch into the bodies of Touched that die. And that is her own “True” power, but she also is able to use the power of the body she switches into, and that’s why she has two.
posted by corb at 12:05 AM on April 22, 2021 [3 favorites]

Yes, a person can rewind, and think on things, and mentally sort what is unclear versus what is a hint at what's to come, but it's annoying, frankly.

Speaking of that, after Maladie's fight with Amalia, I got that her turn is that rage and physical pain make her stronger. Is that was we're supposed to get?

I could be so much more into this if Maladie weren't a main villain for now and Denis O'Hare weren't in it. Both of those characters are such awful retreads, they actively undermine what I'm enjoying.

And I am really enjoying Amalia and Penance. Bonfire Annie is very cool, and it looks like she's switched sides by the end of this episode, or at least quit being a henchwoman. I've always liked Ben Chaplin, and his detective is more interesting than I initially thought he'd be. I'm very glad that Olivia Williams wasn't cast just to be disapproving from her chair. (But I will be extremely disappointed if her motivation is figuring out how to walk again.)
posted by gladly at 8:58 AM on April 22, 2021

Bonfire Annie is very cool, and it looks like she's switched sides by the end of this episode, or at least quit being a henchwoman.

My read on it was that as soon as Amalia lost consciousness, she jumped bodies - into Annie. It seemed like there was a look of recognition, rather than surprise, between Annie and Maladie when the double-cross happened there, which makes sense if Maladie understands that to be how Amalia's power works.

It's also possible that Annie was just following up on her earlier-stated "I can work with crazy, I can't work with stupid," but I'm not ready to abandon my theory yet.
posted by mstokes650 at 9:58 AM on April 22, 2021 [4 favorites] 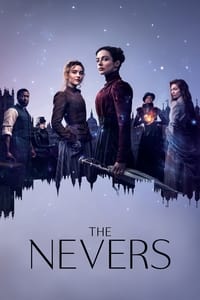