After answering a call about a neighborhood prowler, Detective Mare Sheehan shoulders her chief's directive to revive an unsolved missing person's case amid increased community pressure. Later, while her loved ones celebrate her ex-husband Frank's engagement, Mare attends a celebration for her legendary high school basketball win and connects with Richard, a professor who's new in town.


The Brilliance is in the Details of HBO’s Riveting Mare of Easttown
Kate Winslet Goes Blue Collar in Mare of Easttown
‘Mare of Easttown’: Kate Winslet Takes a Bite Out of Crime
What about the accent work? Can ‘Mare of Easttown’ Help Bring the Philadelphia Accent Mainstream?
posted by gladly (13 comments total) 3 users marked this as a favorite
I grew up in Rhode Island, some of it in Providence, but have lived in California for 25 years. This episode's winter exteriors damped my hankering to move back.

Anyone else get a hint of Sarah Linden (Mireille Enos) from The Killing in Mare's body language?

After noping out after 2 seasons of the 12 Monkeys series due to the violence, I was hesitant to watch this show, but the violence does have effects. People hurt or killed affect those around them which is a great contrast to the "headshot, headshot, ok, carry on like no big deal" I'm sick of.
posted by ASCII Costanza head at 8:34 PM on April 19, 2021 [1 favorite]

Heads up: Sepinwall's (Rolling Stone) review mentions a detail that's not from the first episode. It's probably not a big spoiler, but I'd rather watch this one episode a week like the old days with it all being fresh. He does disclose "I’ve seen the first five of seven episodes."
posted by ASCII Costanza head at 8:39 PM on April 19, 2021 [1 favorite]

I live in the area where this was filmed, and I was always going to watch it. I thought the first episode walked a nice line of letting us get to know Mare, her family, and the neighborhood without going straight to violence. The interlude with Mare at home, learning about Frank's engagement party, going to the basketball ceremony, all of that could have been really boring except for the dark, wry humor of the characters.

Kate Winslet is doing admirable work with the accent and her performance overall.

Strong start, if a little slow to start clueing some of the mystery plot. The casting is great.

Overall this reminded me a bit of the British drama Happy Valley—a depressed working-class area grappling with a drug problem, a divorced cop taking care of a grandchild while juggling a lot of responsibilities, a new recruit on the force.
posted by bcwinters at 7:46 PM on April 20, 2021 [4 favorites]

Somewhere I saw the phrase "sad detective show" and now I can't stop comparing the sadness of them all.

So far I still think Ben Mendelsohn in The Outsider is in the lead.

This definitely took its time to get where it was pretty obviously going but I was able to stay with it because of the realness of everyone. It doesn't have the exaggerated prose of True Detective thank god.
posted by M Edward at 8:46 PM on April 20, 2021 [5 favorites]

Just watched this tonight and am definitely hooked.
posted by orange swan at 8:47 PM on April 22, 2021

I'm just coming to the end of this first episode as I type this and I've enjoyed it very much. The setting reminded me of the small town in south-east Ohio where I've spent a lot of time. I got a bit lost at first about how all the characters were related/knew one another, but got there in the end.
posted by essexjan at 10:43 AM on April 24, 2021

Anyone else get a hint of Sarah Linden (Mireille Enos) from The Killing in Mare's body language?

I'm heartbroken for poor Erin. She seemed like such a sweet girl who was hungry for love, and she had so little good in her life, and had so much to cope with. She's a good mother to her son, young as she is, and she has a nice best friend whose mother is kind to her, but own mother is dead, she has a horrible father, a horrible ex, and she's probably not even able to go to school because she wouldn't be able to pay for daycare for D.J. Then she thinks there's a nice guy interested in her, but it's just her horrible ex's awful girlfriend being an asshole and catfishing her, and then assaulting her. And she winds up dead.

Had to roll my eyes over Brianna's "stop texting my man". Funny how the women who are most nastily territorial over "their men" always have the ones least worth possessing. Same goes for women who are that quick to call another woman a "bitch"... generally it's pure projection.

Siobhan seems like such a good kid: capable, smart, responsible, caring. Then Mare accuses her of trying to fuck everything up, which wtf.

I definitely don't think I'd want to live in the kind of place that would make so much of a state championship high school basketball game 25 years later. And it would so piss me off to have my ex buy the house behind mine, even if it did make it easy to manage child care.

Kate Winslet is an order of magnitude away from being the person she's playing here, but she totally sells it. Respect for the lack of vanity and kind of dedication it would take for her to play this character. The whole show does have such a real, raw, gritty feel to it.

Some really funny moments in this: Mare dealing with the new cop's phobia of blood and her sprained ankle and a bleeding suspect all at once. Mare taking the lid off a can of spray cheese with her teeth while her cousin quips that maybe her ex has found a good woman.
posted by orange swan at 8:20 PM on May 4, 2021 [5 favorites]

I started watching this last night and almost noped out of it when Erin's father seemed poised for physical violence against her -- in the first minutes of the series! this is not a good sign! -- but kept going when she, heartbreakingly, fibbed her way out of it. That poor child, and her poor child. Good god. I can already tell this show is going to kill me every week.

This definitely took its time to get where it was pretty obviously going but I was able to stay with it because of the realness of everyone. It doesn't have the exaggerated prose of True Detective thank god.

Yeah, it was pretty clear where it was going and it was still awful when it got there. The messiness and as-close-to-authenticity as you ever get on TV of the dialog sells it for me.
posted by uncleozzy at 7:40 AM on May 5, 2021

I binge watched this series because I needed to understand the SNL parody. Worth it.
posted by gemutlichkeit at 1:22 PM on June 30, 2021 [1 favorite]

Impressive start! Does anyone know the name for the trope where a tough detective suffers an injury in the early stages of a movie/show, and that injury lingers through the rest of the drama? I feel like it’s in every noir or noir adjacent detective drama.
posted by skewed at 9:43 AM on February 28 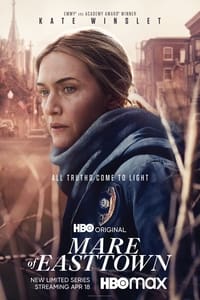